Reed’s terse song-stories rely on humorous and torqued and poignant metaphors, and serve up pop cliches in order to turn them inside out and reveal hidden truths. 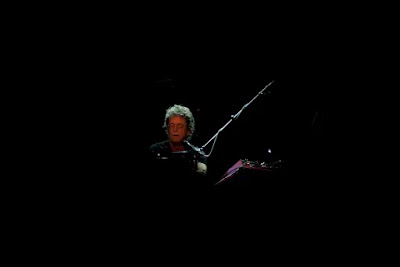 “I used to be in a rock ‘n’ roll band,” Lou Reed nervously reminds his audience at the Poetry Project of St. Mark’s Church in the winter of 1971. A year earlier, he’d quit the Velvet Underground and returned to his first vocation: writing poetry. The complete audio from that reading is one of the many literary interludes in the multimedia exhibition Lou Reed: Caught Between the Twisted Stars at the New York Public Library for the Performing Arts at Lincoln Center.

Culled from the musician’s archive, Lou Reed Papers 1958–2015 (Reed died in 2013 at age 71), housed at the library, the exhibition was curated by a team that includes his widow, Laurie Anderson, and Don Fleming and Jason Stern. The exhibition includes personal letters, photographs, posters, audio-video stations, and an immersive listening room that features live performances and “Metal Machine Trio: The Creation of the Universe,” Reed’s sound art installation, presented in a wall-sized video with ambisonic (3D) sound, designed by Raj Patel of the acoustical engineering group Arup.

The exhibition’s most interesting subplots are Reed’s practices as a poet and literary figure. His showbiz persona as a protopunk Elvis to the underworld — mad, bad, and dangerous to interview — has long obscured the introspective versifier he was. Alongside wordsmiths like Leonard Cohen, Joni Mitchell, Bob Dylan, and Laura Nyro, he helped transform pop songwriting by drawing on his roots in literary culture. As recently as 2006, Reed told an interviewer: “I wanted to put [William] Burroughs’s [Beat-era novels] and Ginsberg’s Howl into a [rock] song.” Fittingly the exhibition’s entrance features video of Reed reading “Romeo Had Juliette” (1989). Stripped of music, the lyrics are reflective and jagged, animated by Reed’s hallmark deadpan phrasing — the spoken word poet’s empathy colored in various New York grays.

One entire room is devoted exclusively to that literary identity: Reed as a studious English major who graduated with distinction; the jobbing poet among poets publishing in magazines from High Times to Life to The Paris Review; the older rocker doubling as poetry’s leather-clad global ambassador in the MTV era. And Reed’s newly republished volume, I’ll Be Your Mirror: The Collected Lyrics (Hachette Books, 2020), could be required reading in a course on the poetics of New York. 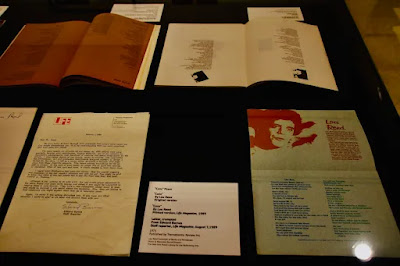 Of course, how Lewis Allan Reed became those many Lou Reeds living within the world’s collective consciousness will be the exhibition’s main attraction. That evolution is further distilled in newly remastered recordings, Lou Reed: Music and Words, May 1965 (Lights in the Attic Records, 2022). These original demos, some featured in the exhibition, draw on unopened tapes Reed had mailed to himself over half a century ago as a “poor man’s copyright,” containing stripped-down versions of classics like “Heroin” and “Pale Blue Eyes” (1967), and a range of previously unknown songs that showcase a songwriter fluent in multiple folk and pop forms, just as he was well read in the darker pockets of modern literature.

This new LP’s early iteration of Reed’s “Waiting for My Man” (1967), like its later incarnation as a Velvet Underground anthem, famously takes White middle-class listeners along for a trip to score in a Harlem heroin shooting gallery. But the exhibition shows that the songwriter was raised a safe distance from those mean streets. Candy came from out on the island, as the man sings in “Take a Walk on the Wild Side” (1972), and so too did Reed, who was born in 1942 and raised in suburban Freeport, Long Island. The exhibition’s wall charts indicate that he was enthralled by doo-wop and early hits by Fats Domino and Chuck Berry. His Syracuse professor, poet Delmore Schwartz, taught him how to get comparably high from books, reading aloud from Joyce’s Finnegans Wake (1939). (For a deep dive into these formative years, the curators have posted an intimate, revealing interview with Reed’s Syracuse University classmate and lifelong friend, musician Garland Jeffreys.)  …………..