THE LIVES OF THE ART MUSEUM

Like cabinets of curiosities from the old regime, art museums often display plunder. 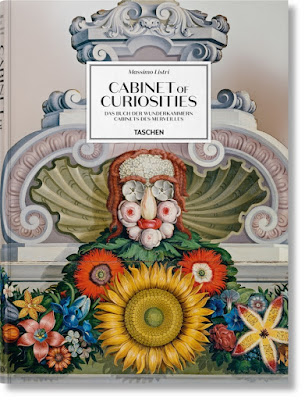 Cabinet of Curiosities with photographs by Massimo Listri and texts by Giulia Carciotto and Antonio Paolucci (Taschen, 2020; all images via taschen.com unless otherwise noted)

The cabinets of curiosities created under the old regime were the precursors of our art and natural history museums. These private, princely collections displayed densely packed presentations of rare and precious objects: fossils, stuffed animals, shells, animal skeletons, coins, ivory sculptures, gems, clocks, rock crystal, swords, scientific instruments; and also works of art. With no labels, these displays offered plenitude with a vengeance.

Gathering together luxuries, many of them exceedingly frail, from everywhere, the cabinets embodied in microcosm Europe’s expansive power. To represent the world in its entirety, so these collectors believed, was to control it. Our distinctive category of fine art had not yet emerged.

Cabinet of Curiosities (Taschen, 2020), a gorgeous, heavy book with photographs by Massimo Listri and texts by Giulia Carciotto and Antonio Paolucci, is perfectly suited to its subject. It has large color close-ups of the contents and displays of 20 Western European cabinets of curiosities, along with some good, brief historical commentary.

Caravaggio’s “Head of the Medusa” (1597-78), now seen as a startling work of art, was in the Uffizi originally displayed alongside “the beautiful but terrifying suit of horse armor given to the Grand Duke by the Persian Shah,” another rare and wondrous artifact.

Nowadays Benvenuto Cellini’s “Saliera” (“Saltcellar,” 1540-43), which today is in Vienna’s Kunsthistorisches Museum, is a marvelous sculpture. But when it was displayed in the cabinet of curiosities of the Hapsburg Emperor Rudolf II in the Prague Castle, alongside “automata [. . .] rock crystal [. . .] cups made from rhinoceros horn or ostrich eggs,” as the authors write, it too must have been understood very differently.

Modernism separated works of art from natural wonders and placed them in public museums, where curators and art historians classified and interpreted them. Like the cabinets of curiosities, these art museums often displayed plunder. The conquering Napoleonic armies dispatched art from Spain, Italy, the Low Countries, and Germany to the Louvre, where its public display impressed the French populace with the fruits of their conquests.
Later, thanks to colonialism, works from China, Africa, Oceania and India were gathered in European museums. And art museums then came to serve a variety of functions. They educated, imparting knowledge about “exotic” cultures. As manifestations of the stability, power, and wealth of the community, they became sources of civic pride. (By the late 19th or early 20th century, almost every large American city had created its own museum.) Museums also provided the opportunity for privileged collectors to share their artworks with ordinary folks, and thereby engage in public relations coups demonstrating their generosity and civic spirit.

In his book, The Personalization of the Museum Visit. Art Museums, Discourse, and Visitors (Routledge, 2019), Seph Rodney, a Senior Editor at Hyperallergic, takes up an important recent part of the art museum’s history. He describes the ways in which art museums have endeavored to replace top-down thinking, which treats visitors as students seeking instruction, with the means of affording them a more active role.

Two generations ago, museums often made a priority of providing visual scholarly resources. The Cleveland Museum under Sherman Lee, who was its director from 1958 until 83, would gather Asian art, his scholarly interest, without any particular regard for the concerns of the local community. Now, however, a museum’s collection and staff are expected to bear some relationship to the composition of its community.

Many museum visitors come to see work by people like themselves, whose experiences in some way mirror their own. And so, given the long, unavoidable link of these institutions with white privilege, it’s important now that previously marginalized, disregarded, or even disdained artworks receive sustained attention. Nowadays public art museums are supported not only by privileged donors, but also, to a greater or lesser degree, by local and national governments.

And so, as Rodney writes, a member of the public is “a shareholder in the nation’s legacy” and “takes possession [. . .] in the visit, by being conceived as a kind of consumer with particular serviceable needs” [italics in original]. To prosper, the museum needs to satisfy these visitors. Needless to say, satisfying all of these conflicting demands is not easy. “Museums are troubling and contradictory,” he rightly states, “because they are produced by and reflect a divided, contradictory, and even antagonistic culture.”

The Personalization of the Museum Visit, an accurate, clear summary of the recent literature, plausibly indicates how museums seek to negotiate this complex situation. After noting his own working-class roots, Rodney describes his vivid first response to the offerings of New York’s Museum of Modern Art: “I felt that I had opened a living book and walked into the shockingly new, imagined spaces that lay within its pages.”