From a Jewish resistance leader’s compass in Israel to a fortified island off France, artifacts and places recall a planet in conflict.

The planet’s deadliest conflict officially came to a close 75 years ago, on September 2, 1945, when Japan formally surrendered during a solemn ceremony in Tokyo Bay aboard the U.S.S. Missouri. Germany had signed an unconditional surrender document on May 7 of that year. Here are five ways to commemorate the end of World War II—while at home and on future travels. 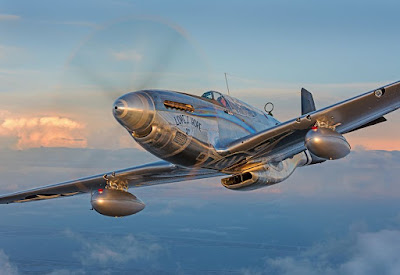 The nonprofit Collings Foundation maintains a fleet of historic aircraft, such as the WWII-era Lockheed P-38 Lightning (shown above), that tours museums and air shows around the United States. For more than 30 years, its Wings of Freedom Tour has touched down at various airports to honor veterans and exhibit restored fliers. During these events, history buffs can even take the controls—along with an instructor—and soar into the skies aboard a P-51 Mustang fighter plane.

Hundreds of bunkers, tunnels, and other eerie remnants of Hitler’s defensive Atlantic Wall dot the Channel Islands, an archipelago in the English Channel off the coast of Normandy, France. On Alderney, visitors can see the observation tower called the Odeon and hike the Bibette Head Trail to explore some of the best-preserved German strongholds. A memorial pays tribute to the slave laborers, from places such as Poland, Russia, and Spain, who helped build the fortifications and died on the island.

At Jerusalem’s Yad Vashem, the World Holocaust Remembrance Center, learn about the Jewish partisans who carried out attacks on the Nazis in German-occupied Europe. Recent additions to the collection include a compass used by Jewish resistance leader Shlomo Brandt during covert operations run from a forest where he found refuge after fleeing the Vilna Ghetto, in what is now Lithuania. The center also houses a large online photo archive of Jewish life before, during, and after the war.

Follow military historian Ian W. Toll on a deep dive into the final year of World War II in Twilight of the Gods: War in the Western Pacific, 1944-1945 (W.W. Norton & Company, July 2020). The last installment in Toll’s award-winning Pacific War trilogy uses firsthand accounts to detail the ferocious battles and high-stakes decisions leading to Japan’s surrender to the Allies.

George Hoshida’s visual diary of drawings and watercolors captures a rare glimpse of life inside the U.S. internment camps where the Japanese-American artist was incarcerated during World War II. Hoshida’s family donated the roughly 260 original works and a separate Hoshida Papers collection containing correspondence, documents, and sketches to the Japanese American National Museum in Los Angeles. Because of its fragility, the artwork is exhibited only occasionally, but it can be seen online.