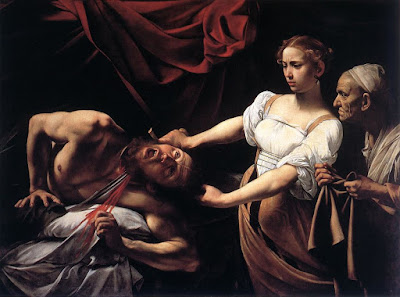 In the wake of the Kavanaugh hearings, I’ve developed a new self-care routine: I put on a sheet mask, cue up some soothing music, and look at paintings of murderous women. I don’t think I’m alone in this; Renaissance and Baroque depictions of Judith beheading Holofernes,

Orpheus being ripped apart by Maenads, and Timoclea tossing her rapist down a well have been popping up on my Instagram and Twitter feeds for weeks. They’ve become memes; recontextualized and captioned, they give voice to women’s rage at the injustices of the present.

In her book Good and Mad: The Revolutionary Power of Women’s Anger, Rebecca Traister challenges her readers to Google the name of any powerful woman in politics—particularly those who challenge white male power and authority—to find a cache of images of that woman yelling angrily. “The best way to discredit these women, to make them look unattractive, is to capture an image of them screaming,” she writes. “The act of a woman opening her mouth with volume and assured force, often in complaint, is coded in our minds as ugly.” It’s not surprising that angry women, when they do appear in Western art history, often take the form of goddesses or monsters: harpies and witches, Medusa and the Sphinx.
Traister’s book argues that female rage has often been the catalyst for political and social change. And yet, we know that when women express their anger, they risk being seen as hysterical, overly emotional, and unserious, even if the reasons for their fury are entirely legitimate.

While I’m not suggesting we throw men down a well, I would argue that when justice seems elusive, images of angry women can be cathartic, even inspiring. What follows are seven works from art history that show the beauty and power of female rage. 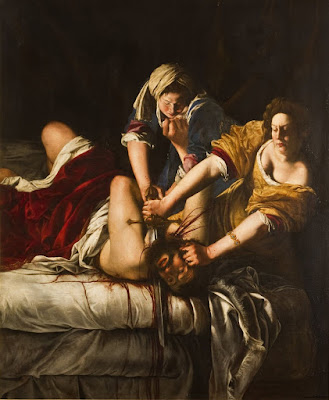 Italian Baroque artist Elisabetta Sirani championed both female painters and female subjects during her short life (she died somewhat mysteriously at 27). She opened a painting school where she trained many women, including her younger sisters, and in her own work, she often chose themes that foreground female fortitude.
Timoclea Killing Her Rapist depicts a popular tale described in Plutarch’s biography of Alexander the Great. During Alexander’s invasion of Thebes, a captain in his army rapes the titular Timoclea. Following the assault, the captain asks where her money is hidden. Timoclea leads him to her garden well; as he peers into it, she pushes him in, dropping heavy rocks down the well until he dies.
The painting turns the story on its head, inverting the hierarchy quite literally: The rapist is shown upside down and helpless, feet flailing in the air, as she stands resolutely above him. Sirani, like many Baroque painters, had a flair for drama, but it’s worth noting that most depictions of this story show the aftermath of the violent event: Timoclea standing before Alexander to accept his judgment, usually flanked by her children. Sirani daringly chose to show Timoclea’s justice, rather than Alexander’s mercy.

Artemisia Gentileschi, Judith Beheading Holofernes, c. 1620. Courtesy of The Uffizi.
Artemisia Gentileschi’s Judith Beheading Holofernes offers another dramatic scene of an ordinary woman overpowering a high-ranking man. Gentileschi’s painting is muscular: The Biblical Judith and her maidservant bear down on their victim, the invading Assyrian general Holofernes, as Judith saws at his neck with a sword. Blood spatters in long, ropy arcs, spraying Judith’s chest and neck. Holofernes’s tortured expression and copious amounts of blood are also present in Caravaggio’s earlier version of this subject (ca. 1599), from which Gentileschi is said to have drawn inspiration. Yet in his rendition, Judith looks rather removed, her face wrinkled in disgust rather than set in determination.
It’s arguable that Gentileschi’s own experiences with sexual violence shaped her approach to depicting this brutal story. At age 18, she was raped by her painting teacher, the artist Agostino Tassi. Unusually for the 17th century, Gentileschi testified in court against her attacker. Tassi was set free following his conviction due to an intercession by the pope, while Gentileschi was made to endure the public shame of the trial—at which she was forced to testify while being tortured with thumbscrews. Gentileschi’s Judith may have been a portrayal of the justice that she herself was denied. 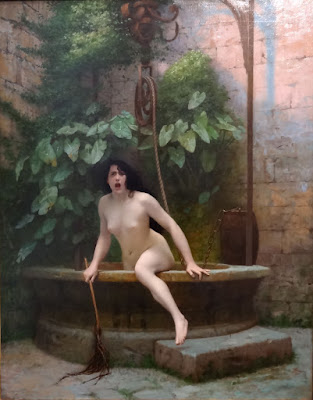 Jean Léon Gérôme, Truth Coming Out of Her Well to Shame Mankind, 1896. Via Wikimedia Commons.

Academic French painter Jean-Léon Gérôme’s take on the allegorical figure of Truth (specifically, the philosopher Democritus’s aphorism: “Of truth we know nothing, for truth is in a well”) differs from contemporary interpretations in a number of ways. A beautiful nude woman emerges from a well, an open-mouthed shout of anger on her face and a whip in her hand, rather than the usual mirror. Although she is nude (a blunt reference to “the naked truth”), she looks ready to charge straight for the viewer in a full-throated battle cry.
Apparently, Gérôme intended the piece as a commentary on the positive impact of photography on painting, a fairly limited metaphor. (“It has opened our eyes and forced us to see that which previously we have not seen,” he wrote.) Yet today, the painting has become a popular meme, due both to its unusually vivid depiction of female anger and its overall weirdness. Truth’s nudity reads here as power and moral purity rather than sexual availability; her fury makes her dangerous. 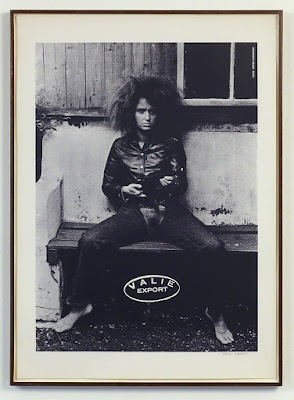 A more explicit re-thinking of the female body as a weapon rather than a sexual object comes in the form of Action Pants: Genital Panic. In 1968, the self-named Austrian performance artist Valie Export entered an art-house cinema in Munich wearing crotchless trousers, her hair teased into a wild mane. By walking through the theater and confronting the audience with her exposed genitals, she sought to challenge viewers to engage with a real woman, rather than look passively at the objectified images of women onscreen.
The following year, to commemorate her performance, Export posed for a photograph. She’s shown with her knees spread wide and crotch exposed, holding a gun and staring down the camera with the panache of a guerilla fighter. Here, Export draws a clear comparison between a weapon of war and the inescapable fact of female sexuality. 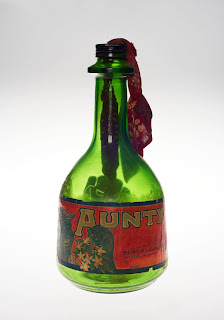 The cocktail Betye Saar offers in this 1973 work is a homemade incendiary device: a Molotov cocktail made from a wine jug. Its label shows a smiling mammy figure on one side, a black power fist on the other. Saar recasts the mammy figure as an agent of armed resistance against racism, a woman who has liberated herself.
In the years following the death of Martin Luther King Jr., Saar began using art to express her outrage at the pervasive discrimination against black communities. In 1972, prompted by an open call for black artists to show their work at Rainbow Sign in Berkeley, California, she exhibited her first Aunt Jemima piece: a mammy figurine holding a grenade in one hand, a gun in the other. “I feel that The Liberation of Aunt Jemima is my iconic art piece. I had no idea she would become so important to so many,” Saar explained in an interview with Artsy in 2017. “The reason I created her was to combat bigotry and racism and today she stills serves as my warrior against those ills of our society.”

Performance by Suzanne Lacy and Leslie Labowitz-Starus, In Mourning and Rage, 1977.

A hybrid performance art piece and political protest, In Mourning and In Rage was created by Suzanne Lacy and Leslie Labowitz-Starus in response to an epidemic of unsolved rapes and murders in Southern California that the police attributed to the Hillside Strangler. Artists, advocates, politicians, and the families of victims all converged on Los Angeles City Hall to perform a ritual of mourning and rage before the press.
In a tightly choreographed event that challenged the media’s sensationalizing and inadequate approach to reporting these crimes, 10 women dressed as 19th-century mourners, traveling to the steps of City Hall by hearse. Their faces obscured by black veils, each performer stepped forward to describe a form of violence against women, explicitly tying the horrors of the Strangler case to everyday abuse and harassment. “I am here for the 388 women who have been raped in Los Angeles between October 18th and November 29th,” one performer announced. “In memory of our sisters, we fight back!” responded the group in unison.
With roots in both 1960s political theatrics and 1970s feminist consciousness-raising, the performance is echoed in public protests today. In 2017, activists dressed as characters from The Handmaid’s Tale, assembling in the Texas Capitol Rotunda to protest a bill limiting abortion rights. Their matching red cloaks evoked the dramatic red-and-black costumes of In Mourning; their anger was familiar, as well. 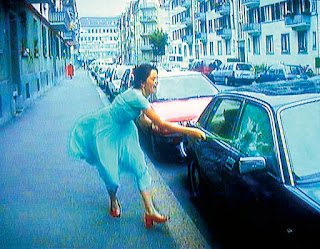 Ever is Over All (still), 1997
"Pipilotti Rise: Pixel Forest" at New Museum, New York
A woman in shiny red shoes sashays down the street in Pipilotti Rist’s Ever is Over All. She cheerfully smashes the windows of each parked car she passes. Instead of stopping her, a female police officer pauses and salutes the vandal. The Swiss artist’s film is a joyful paean to the destruction of authority and liberation from the norms of feminine “good behavior.”
A more pointed variation on the theme (often compared to Rist’s) is the music video for “Hold Up”from Beyoncé’s 2016 visual album Lemonade. “I tried to be soft, prettier,” Bey admits at the beginning of the song, before she stops trying to please and starts gleefully smashing parked cars with a baseball bat. The video offers the same exhilaration as Rist’s, the notion that anger itself might free us from everything from cheating spouses to systemic racism and sexism. When Beyoncé’s bat busts open a fire hydrant, children frolic in its spray, and when she smashes a car’s windshield, an explosion erupts, silhouetting her in fire like an avenging angel. But what’s most striking is her lack of apology. She grins and grimaces, smashes and struts, as rage becomes her, after all.