(WHY) TECHNOLOGY IN TROUBLED TIMES. METOPERA

Technology has made a crucial difference to the Met at several critical points in its history. The Nightly Opera Streams introduced when the season was cut short by eight weeks due to the Covid-19 pandemic, as well as the recent At-Home Gala, are just the latest examples of the Met using technological platforms to confront a crisis.

When the Great Depression hit the United States in 1929, the Met had been enjoying a long period of prosperity. Nevertheless, within a couple of seasons, the Metropolitan Opera Company—the performing troupe—was in dire straits from plummeting box office revenues. As a result, the Metropolitan Opera Association was established in 1932 as the first non-profit entity in the company’s history. The Opera Company’s leases, contracts, and assets were transferred to the Association, which no longer had to pay admission taxes on ticket revenue and could now raise money from the general public for the first time. 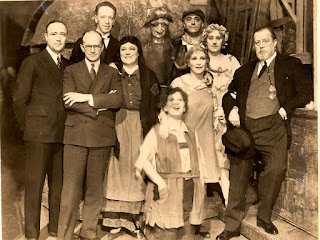 As fortune would have it, the Met had just begun a series of regular live radio broadcasts in December 1931. The National Broadcasting Company paid the Met an annual fee for the rights to transmit the performances, but more importantly, the live broadcasts presented the perfect opportunity to raise funds directly from the millions of listeners around the country. The “Committee for Saving the Metropolitan Opera” was formed, with soprano Lucrezia Bori (pictured below during a broadcast with tenor John McCormack) as chairman, and made its historic first radio broadcast appeal on February 25, 1933. The campaign’s initial goal of $300,000 was reached in two months, with a third of the total coming from small donations by the radio audience. Public funding appeals via the radio would henceforth become a mainstay of the Met’s financial resources; it also played a crucial role in 1940, when the Metropolitan Opera Association bought the opera house from the boxholders who had built it and had been leasing it to performing companies for most of its history.
The regular radio broadcasts, underwritten by commercial sponsors such as Texaco and Toll Brothers, continued to build audiences for opera and moreover made them loyal supporters of the Met as the primary provider of top-quality performances. That devoted audience would also serve as the basis for the future supporters of the company’s new technological innovations that have occurred right up to the present.

The 1970s again found the Met at an unstable time in its existence. The move to the Lincoln Center opera house in 1966 had proven to be a great success in many ways, but the financial burden of the new building, and in particular the expenses of year-round employment for the company’s personnel, had far surpassed the company’s revenues. The crisis hit just as a period of managerial instability ensued after longtime general manager Rudolf Bing retired in 1972, and his successor, Göran Gentele, was killed in a car accident.
In order to survive, the Met had to drastically change how it operated. To address the revenue problems, in-house development and marketing departments were launched. In addition, the Met began a long-term collaboration with the Public Broadcasting System to televise a regular series of performances live from the Met stage into homes around the country. On March 15, 1977, La Bohème, with Renata Scotto and Luciano Pavarotti (pictured above), was telecast, initiating a series of performances shown annually on PBS. At first called Live from the Met, later The Metropolitan Opera Presents, and more recently Great Performances at the Met, the telecasts confirmed the company’s status as a national treasure and were an important boon to fundraising just at the time it was launching its Centennial Endowment Fund campaign, by far the largest effort up until then.

With a television and radio audience in the millions and a large base of supporters around the U.S. and beyond, the Met stabilized its finances in the 1980s. But financially speaking, opera is a fragile business even in the best of times. When the 9/11 tragedy struck New York City in 2001, the effect on audiences for all theatrical events was drastic. For the first time in decades, the Met had a major problem regaining audience members. 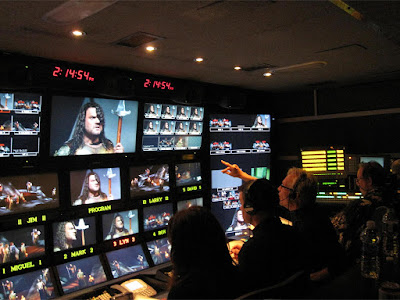 A look inside the Live in HD production truck, from which the simulcasts are directed and transmitted

Several years later in 2006, Peter Gelb took over as general manager. With extensive experience in the video and recording business and a deep understanding of emerging technologies, he mounted a new endeavor, The Met: Live in HD, transmitting performances live from the Met stage into movie theaters in high-definition. Theater chains and independent cinemas around the world signed on to receive a series of Met performances each season, and the results were astonishing. Millions of opera lovers and neophytes bought tickets, creating an enthusiastic and devoted following for the Met in far-flung places that had no other access to the art form. Live in HD produced the first entirely new substantial revenue stream for the Met in many decades. The series also updated and extended the collection of Met performances that are available for viewing on new platforms as digital technologies evolve. Thus, when the Covid-19 pandemic struck, confining millions worldwide to their homes, the Met could immediately begin a daily streaming series that is drawing enormous viewership and expanding its base of supporters once again.
On Saturday, April 25, 2020, the Met produced a truly unprecedented event made necessary by the pandemic and made possible by technology. The “At-Home Gala” featured over 40 Met principal artists performing live from their individual homes in locations around the world through the use of video conferencing software available on personal home devices, as well as the Met Orchestra and Chorus in complex performances edited together from dozens of individual takes recorded by each ensemble member. Though the gala did not pretend to replicate the quality of in-person performing, the opportunity for audiences to connect with the music and artists they love led to enormous viewership and an outpouring of support for the company. The daily streaming performances and the gala have proven one thing for certain: The opera audience is loyal and motivated. Perhaps from these unexpected troubled times a new ray of hope will emerge as opera lovers renew their commitment to the art form and the institutions that perpetuate it.