ANCIENT POMPEII HAS A RECYCLING PROGRAM

Researchers recently discovered systems of sorting rubbish, like mortar and plaster, for reuse. 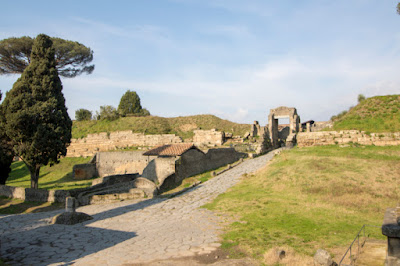 The Porta Nocera suburb outside the southern wall of Pompeii. When this area was excavated in the mid-twentieth century, garbage covered the roads and piled in and around the buildings. (All images by and courtesy of Allison Emmerson, except as noted.)
We tend to think of recycling as a New Age movement, reflecting a contemporary understanding of the need to mitigate human impact on the environment, but new discoveries reveal systems of sorting in rubbish piles from the city of Pompeii. The ancient Roman city was famously covered in ash by the violent eruption of Mount Vesuvius, which preserved a snapshot of daily life that includes, apparently, a fairly enlightened approach to waste management.

“I began thinking about garbage at Pompeii some years ago, as I was working on my dissertation on the city’s tombs,” said Professor Allison Emmerson, a Tulane University archaeologist who led the team of researchers, in an email interview with Hyperallergic. “Since the earliest excavations of the eighteenth century, large piles of ancient refuse had turned out outside Pompeii’s fortification wall, in and around the tombs that Roman law relegated to the same area. Past interpretations had viewed these waste mounds as akin to modern landfills, signifying the separation between the zone outside the wall and the city within it, even going so far as to see nearby tombs as abandoned and no longer visited by friends and family of the deceased.”

But Emmerson found the opposite — that garbage turned up in association with monuments that were still in active use, where the living continued to bury their dead and return for regular commemoration. Discarded materials like mortar and plaster, and crumbled tiles and amphorae, were utilized to build walls; the piles of abandoned material were intended to be resold within the city.

“I began to realize that ancient attitudes towards garbage must have been quite different from our own,” said Emmerson. “That point became even clearer as I continued excavations in the city center (with the University of Cincinnati’s Pompeii excavation, directed by Steven Ellis).”
These, and more observations on Roman cities are expounded in Emmerson’s new book, Life and Death in the Roman Suburb (2020, Oxford University Press), set for release this month, which examines how, when, and why Roman cities abandoned their walls to intentionally spread beyond them.

“Recycling and reuse are natural human behaviors; for as long as humans have been using tools, we’ve also been recycling and reusing them,” said Emmerson. “The Romans didn’t invent recycling; the modern world invented not-recycling.” 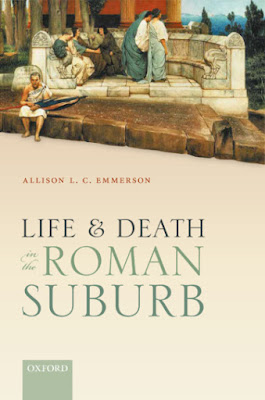 Professor Emmerson’s new book is set for release on May 25. Image courtesy of Oxford University Press.

From Emmerson’s perspective, the current disconnect between the stated goals of contemporary recycling programs and their actual results has to do with the overarching priority that actually guides such programs: to remove waste from daily life.

The Porta Ercolano suburb outside the northern wall of Pompeii. When this area was excavated in the eighteenth and nineteenth centuries, ancient garbage piled in and around the tombs, houses, and shops.

“Ultimately, we would like our waste to be recycled or reused, but we demand that it be removed from our houses, streets, and businesses,” Emmerson said. “Pompeii’s waste management system was guided by a different priority, that garbage be collected for reuse. The Pompeians recognized that when gathered in large enough quantities, waste became a valuable commodity. What made the system work was their willingness to live far closer to their refuse than many of us would consider acceptable today.”

Emmerson’s fascinating work and analysis of life in Roman cities certainly has resonance today, as human activity continues to fuel climate change, and therefore impact the run of daily life. Perhaps our wake-up call won’t be as dramatic as a volcanic eruption, but on an archaeological scale, the fallout may ultimately look much the same.
https://hyperallergic.com/562689/ancient-pompeii-had-a-recycling-program/?utm_medium=email&utm_campaign=D051120&utm_content=D051120+CID_3604822798f13c9f28177f8d1edf9fc6&utm_source=HyperallergicNewsletter