A MAN OF PARTS BY DAVID LODGE – REVIEW
Wells's life would suit a great biography or a novel. This hybrid doesn't quite come off 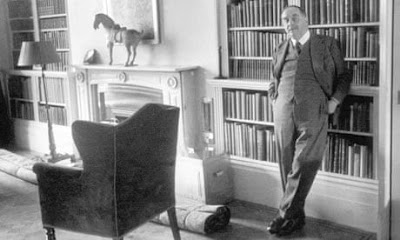 HG Wells: 'A winning combination of pheromones gave him the aroma of walnuts or honey.' Photograph: Kurt Hutton/Getty Images

A Man of Parts is either a biography of HG Wells in the form of a novel, or a novel in the form of a biography of HG Wells. David Lodge has imagined some details and manufactured some correspondence, detailed in an acknowledgements section, but the novelistic element is kept within bounds. It's true he has invented interviews (or self-interviews, in which Wells accuses and defends himself in dialogue form) to supplement his narrative, but this modest liberty is hardly more than some biographers claim as a matter of course – Ackroyd on Dickens is an obvious example.

The benefit of this hybrid form for the writer is that it frees up the texture of the book, avoiding the build-up of clogging documentation, and allows him to hurry over or emphasise themes at will. The benefit for the reader isn't so clear.
In the opening section, set in 1944, Wells is in his late 70s, unwell and despairing, writing Mind at the End of its Tether with what energy remains to him, and also working on a very different piece of prose called The Happy Turning: "It is a slight, sunny prose fantasia, a carnivalesque reworking of his story 'The Door in the Wall'. It owes something to the idea of 'dreaming true' in George du Maurier's Peter Ibbetson and even more to Henry James's tale 'The Great Good Place'."

It's hard to identify this professorial voice as belonging to anyone but Lodge himself (even without the knowledge that he has written a novel about the friendship of du Maurier and James). It seems to rule out the readerly surrender on which fiction depends.

The bulk of the book amounts to a flashback to Wells's earlier life, returning to his last months in the final section. Here his work is discussed in a more conventionally novelistic way, with family members looking up from reading the proofs of a book to pass comment, or consulting the shelves to substantiate a point ("'Remember Karenin in The World Set Free?'").

Lodge's title suggests both Wells's unusually broad portfolio of interests and also a recurrent obsession. Short, unshapely and not always able to produce respectable middle-class vowel sounds, HG Wells was perhaps the least likely sex machine in literary history. His two marriages were to women who were hardly on speaking terms with desire, but he more than made up for this in his spare time. The interest in strong, independent women was sincere, but it was hardly impaired by their regular sexual availability. The secret of his success seems to have been a winning combination of pheromones, which gave him the aroma of walnuts (according to Rebecca West's testimony) or honey (Elizabeth von Arnim).

Rebecca West is given a point of view in the first and last sections, but not during her involvement with Wells, when she was transformed from a drily savage critic of his work to a woman obsessed. The novelistic element of A Man of Parts would have been stronger with invented or elaborated testimony from the remarkable women (including Dorothy Richardson and Amber Reeves) who found Wells an object of fascination.

The affair with Reeves would make the best self-contained fictional narrative. She inspired Ann Veronica, but the scandal made relations impossible with the straitlaced Fabian Society, in which Wells had made his most sustained attempt to turn socialist principle into practice.

There's a fair amount of gush in the book's tone when dealing with its hero's love life, along the lines of: "'I never felt such sensations before,' she sighed after a gratifying orgasm. 'And I never realised a man could go on for so long.'" This novelettishness can't really be blamed on the deluded romanticism of the women involved, in the absence of their point of view. HG Wells wrote something called Boon, but not for Mills & Boon.

The book's final verdict on Wells, given by Rebecca West, is that "HG was like a comet. He appeared suddenly out of obscurity at the end of the 19th century and blazed in the literary firmament for decades, evoking astonishment and awe and alarm, like the comet of In the Days of the Comet which threatened to destroy the earth, but in fact transformed it by the beneficial effect of its gaseous tail." She anticipates that one day he will glow in the firmament once again.

In recent years David Lodge has suffered a different type of astronomical event, a partial eclipse by other writers. First he had the bad fortune to publish a book with Henry James as a major character shortly after Colm Toíbín had produced The Master. Now he has chosen a protagonist who becomes involved in the unconventional household of Hubert and Edith Bland (who wrote under the name of E Nesbit). This is a fascinating little world of secrets and cross-currents, ideals and betrayals, but his version has none of the intensity AS Byatt gave to her transformation of it in The Children's Book.

Henry James also features in A Man of Parts, since the two writers were under the impression they were friends, and lavished ambiguous compliments on each other's books until Wells published Boon, containing savage parody impossible for James to take in good humour. David Lodge defers to James's status but doesn't seem attracted to his principles of writing. He must know that James would have found his chosen approach hopelessly miscellaneous.

The narrative's uncertain distance from the protagonist is shown by one mannerism in particular. A number of times Lodge refers to the central character as "himself", in a way that is awkward and sounds almost Irish: "She declared that the Webbs' friendship with himself was at an end", for instance. At other times he stays loyal to "he": "The general editor, who admired her book reviews, had invited [Rebecca West] to contribute to the series on a subject of her own choice, and she proposed Henry James – to his displeased surprise…" Here "his" attaches, by any orthodox grammar, to "editor". Again: "[William] Joyce was granted leave to appeal, which is where [Rebecca West's] article ends. Writing to congratulate her he says that he enjoyed reading it, but would enjoy seeing her even more." A long moment's thought is needed to understand that it isn't Lord Haw-Haw who is writing to, congratulating and wanting to see Rebecca West. It seems to be worth quite a lot of clumsiness to avoid saying "Wells", and sounding like the straightforward biography A Man of Parts so much wants not to be.