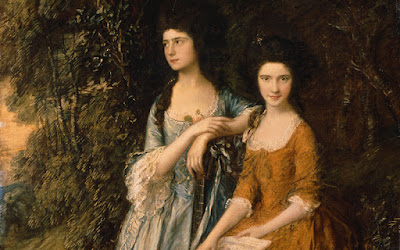 In honour of Thomas Gainsborough’s birthday this month (he would have turned 293 on 14 May) we take a look at one of his beloved portraits in our collection, The Linley Sisters.

Elizabeth and Mary Linley were the Kardashians of the 1700s. As a good friend of the family, Gainsborough painted many portraits of them, but this is the only known double-portrait of the gifted sisters. Elizabeth (left), was one of the most sought-after singers of her time. Around the time this portrait was painted, her dramatic love life was the talk of the town; she broke off an engagement to Walter Long in 1771 – reputedly because of an affair with Captain Thomas Mathews – which was swiftly followed by her marriage to the playwright Richard Brinsley Sheridan in 1773. Mary (right) made her public debut as an actress at the Theatre Royal, Covent Garden in 1769 before following in her sister’s footsteps as a singer of oratorios. Both sisters retired from performing after marrying, Elizabeth at just 18 and Mary at 22.