ATTENTION: “COLLEGE OF GRIEVANCE STUDIES”: A SATIRICAL ILLUSTRATION OF A FAKE UNIVERSITY LIGHTS UP THE INTERNET

From a “Cuck Zone” to a Karl Marx fountain, a satirical illustration of a liberal arts campus by Chelsea Saunders is making its rounds on the internet.

Sarah Rose Sharp
“The Campus as it Exists in the Mind of a U.S. Conservative” by Chelsea Saunders for Vol.3 Issue 6 of Current Affairs Magazine. All images courtesy of the artist. 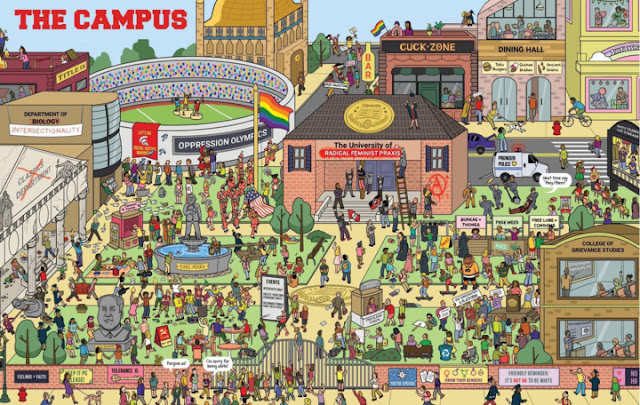 As virtual commencements wrap up the most abbreviated academic year ever, it makes a left-winger nostalgic for one’s college days. Perhaps that’s why a satirical work by illustrator Chelsea Saunders for the 2018 issue #16 of Current Affairs Magazine is suddenly making the rounds on Twitter, causing thousands of proud liberals to tag themselves in Saunder’s Where’s Waldo-esque crowd scene, titled “The Campus as it Exists in the Mind of a US Conservative.” However, its original intentions have been somewhat blurred after its title was cropped out, with leftists and conservatives offering their own interpretations.
“Although [the title] has been mysteriously photoshopped out,” said Saunders, in an email interview with Hyperallergic, “the editors [Nathan J. Robinson and Lyta Gold] wanted to comment on the conservative belief that college campuses are wild liberal playgrounds (which of course isn’t true).” Saunders credits most of the jokes as written by the editors — for example, Lyta Gold came up with the “Cuck Zone” bar — but was able to throw in her own ideas as well.

“As a leftist, most of my work is political satire anyway, so working with Current Affairs is a blast,” she said. “The editors definitely wanted to include specific terms used by the right-wing, in order to get the satire across.”

Truly, the image has something for everyone: an awards ceremony at the Oppression Olympics, a man being burned alive atop the Title IX building, a nursery-like Safe Space, an army of rats, a riot in progress destroying the Classics Department, and an idyllic Karl Marx fountain — just to name a few of the familiar sights that all of us liberals recall from our undergraduate and postgrad years around universities. Just make sure you steer clear of the Pronoun Police and the Cuck Zone … unless you’re into that kind of thing, because we obviously don’t kink-shame here. Whatever you’re into……………..