IN THE FORESTS OF ITALY, OLD MEN SEARCH FOR TRUFFLES WITH THEIR DOGS

The documentary "The Truffle Hunters" looks at a dying way of life. 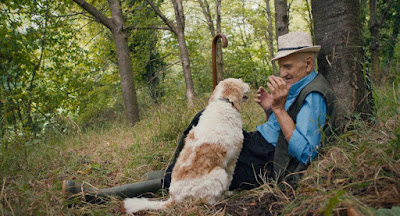 The exceptionally rare white truffle can be found primarily in the Piedmont region of Italy. Chunks of the “Truffle of the White Madonna” can sell for tens of thousands of dollars per pound. Humans have not yet figured out a way to reliably cultivate and farm the fungus, and so they are still harvested the old-fashioned way — by hunters roving through the forest, following the noses of their trusty dogs. (Pigs would be more ideal, but they can’t resist eating the delicious truffles when they find them.) This is an old tradition, practiced now mainly by ancient men who have kept their tricks as closely guarded secrets. The new documentary The Truffle Hunters follows them at work.

The film explores the uncanny intersection we see in the truffle market, contrasting the modern high-gloss and high-stakes economics with the deliberately slow, measured methods of the practitioners whom it relies on. In particular, the movie luxuriates in the care the men show their dogs, through their meticulous grooming and intensive training methods. The documentary also explores how their way of life is in danger — not just due to a lack of new hunters, but also because of climate change affecting the way the truffles grow. And so the film is not just beautiful and fitfully adorable, but also wistful for a dying way of life.