Margaret Gainsborough was a woman who knew her own worth. 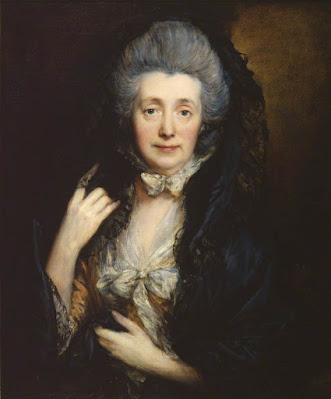 The English portraitist Thomas Gainsborough (1727-1788) took no small pleasure in being known as “the likeness man.” Rather he than Sir Thomas Reynolds, his principle adversary. The fashionable flocked to him like pigeons to bread crumbs in St. Mark’s Square. He also, being human, grew sick of being forever “in harness” more appropriate to a horse, as he once put it, somewhat wearily. At least portraits sold, ho hum.

Given this fact, it is surprising and intriguing that, in spite of these professional demands upon his time, he also chose to paint portraits of his own family with regularity. He made more than 50 likenesses of them in all, many of which were never quite finished. Even the family dogs came in for attention. Some of the best known of these portraits show off his two daughters (there are six of these works), painted both when they were innocently young (once, and most delightfully, hand in hand, in the company of an imaginary butterfly that outpaces them), and then, much later, as a winning brace of fashionable and willowy belles.

Among the finest of his intimate portraits is of his wife, Margaret, around the age of 50. It may have been painted for her birthday. He tended to paint her on their wedding anniversary — such was the custom in her family. Margaret was a woman who knew her own worth. Gainsborough himself could be feckless.

Here, the waves seem relatively becalmed, though this could easily be a calm before the next storm, we may feel. He shows her full-face, as if standing directly in front of us, blocking the view of everything but herself. Sometimes portraits contain various appurtenances indicative of social status or mortality — skull, map, plinth, book, antique column. Not so here. Here there is nothing but Margaret’s mature womanhood. And what an intimidatingly impressive presence she is!

Margaret has a keen-eyed air of watchfulness, self-possession, and even indomitability about her. Her face looks so vividly alive and present in front of us that we might feel we are almost participating in the challenging relationship that she and the painter may have occasionally had. And yet there is also more than a hint of tenderness in her level gaze. She looks sumptuously bedizened, and this is entirely as it should be because, though illegitimate, she was the daughter of a duke and brought money to the marriage.

By this pinnacle in his career, Gainsborough was living in Schomberg House on Pall Mall, at the very center of the fashionable fizz of London, and Margaret was with him there, sharing that pinnacle. He made six portraits of her during their time in London.

Her black mantilla is held back from her face to reveal a fine, quite stiff sculpting of rising, powdery gray hair. Her hands — and especially the fingers — have a slenderness and even a certain sensual allure about them. Perhaps there is a touch of flattery in this. The way that the questing red tip of the first finger of her right hand negotiates its way up beneath the edge of the mantilla reminds us that flesh partially concealed is often more winning to the eye, more full of a promise yet to be revealed, than flesh wholly exposed. There is perhaps a small gesture of amorous beckoning in that finger, which is — given that it is also choosing to hide itself away, muffled now — slightly under wraps…

The form of the black mantilla itself, and especially the part of it that we see cascading down the left-hand side of her body, looks boisterous, a little like silken black waves on the fold-and-turn.

All this presenting of mixed messages — the serenely watchful stillness of the attentive gaze set somewhat in opposition to the questing finger and the boisterous presence of that upper body’s mantilla-wrap — lends a pleasing tension to the whole. A frisson of passion withheld — or sweetly anticipated perhaps. She, with her bow at the neck, is proposing herself as a wonderful gift of womanhood. Or is that his take?