SPECTRUM EXHIBITION, AN EXPLORATION OF COLOR. THE NGV IS OPEN AT NGV INTERNATIONAL

Spectrum: An Exploration of Colour

Prior to the broader introduction of synthetic colour pigments in the late nineteenth century, artists were not able to readily source the range and vibrancy of pigments and paints they desired. The seventeenth-century Dutch artist Samuel van Hoogstraten complained, ‘I wish that we had a green pigment as good as a red or yellow. Green earth is too weak, Spanish green [verdigris] too crude and ashes [verditer] not sufficiently durable’.1

During the Medieval and Renaissance periods (tenth to sixteenth centuries), colour was appreciated as much for its material, scientific and medicinal properties, as it was for its visual qualities, the natural materials for coloured pigments also forming the basis for medicines and broader scientific enquiry. The manufacture of pigments, inks and dyes was part of the ancient practice of alchemy, regarded as an art form in itself, and now seen as the precursor to modern chemistry. Alchemy focused on the transformation of matter – in particular, the desire to turn base metals into gold, albeit unsuccessfully, but was also closely related to the manufacture of artist’s pigments. This is evidenced in many surviving scientific texts from the Medieval period that contain pigment recipes using plants, minerals and metals, many of them highly toxic.

The following pigments feature in Spectrum: An Exploration of Colour and are illustrative of the complex and fascinating history behind the manufacture of artists’ colours.

Vermilion was regarded as the medieval prince of reds. It is the synthesised, powdered form of cinnabar, a naturally occurring mineral ore comprising mercury and sulphur. Known from China since the fourth century BCE, the recipe for vermilion did not enter Europe until around the eighth century and was thought to have come from the Arab alchemist Jabir Ibn Hayyan. To create the pigment, sulphur and mercury were blended over heat, as dramatically described in the technical handbook De Diversis Artibus (On Diverse Arts) (c. 1150) by Theophilus, believed to have been a Benedictine monk. He said, ‘[Sulphur and mercury are placed in a sealed pot and buried in] blazing coals … You hear a crashing noise inside, as the mercury unites with the blazing sulphur’.2 The resulting blackened lump was then ground with water when the fiery red colour of the vermilion powder developed. Centuries later, the Italian artist and writer Cennino Cennini also referred to the alchemical process of making vermilion in his craftsman’s handbook Il Libro dell’Arte (late 1390s) but advised to buy it ‘ready-made in an unbroken lump, as some apothecarists were known to contaminate the precious pigment with red lead or brick dust’.3

During the Medieval period, vermilion was extremely costly, comparable to the high price of gold, and used sparingly in illuminated manuscripts until the early fifteenth century, after which time it appeared more frequently in oil painting. The Virgin and Child, mid to late fifteenth century, is an example of the many advances that took place in oil painting during the fifteenth century, seen in the extraordinary richness of colour and tone and their subtle blending. Here the artist has chosen to depict the Virgin Mary’s distinctive cloak in vermilion red, reflective of the enormous cost of red dyed cloth and Mary’s high status. Red lead was likely added to the vermilion for intensity and the depth in the textile’s folds was created by additional glazes of kermes or cochineal red.

The deep blue semi-precious stone lapis lazuli has been mined for thousands of years from the Badakhshan mountains of Afghanistan, high up on the northern slopes of the Hindu Kush. Lapis lazuli was sometimes ground to create a blue pigment; however, it was also used to make ultramarine – the princely blue pigment, produced from lazurite, a key mineral within lapis lazuli that gives it its blue colour. The challenge in making ultramarine was to extract the blue lazurite from the iron pyrites and white calcite impurities with which it naturally occurs. This was a laborious and complicated process, which is thought to have derived from an early Arab alchemical recipe that described how to grind the stone and mix it into a paste with melted wax, oils and resins. The paste was then kneaded in an alkali solution from which the lazurite particles were washed out, left to settle, and then dried and ground. Of all the naturally occurring mineral colours, ultramarine was the most expensive, being more costly than gold, and during the Medieval period its provenance and production were shrouded in mystery. For every hundred grams of lapis, just four grams of pigment was extracted.

The Italian Renaissance painter Cennino Cennini described ultramarine as ‘a colour illustrious, beautiful, and most perfect, beyond all other colours’. In Simon Marmion’s painting The Virgin and Child, c. 1465–75, the artist chose to represent the Virgin in a subtley glowing deep blue dress and matching cloak, the ultramarine colour symbolic of Mary’s role as the Queen of Heaven. Similar to vermilion, ultramarine was reserved for the most significant subjects and artists used this colour not only to signify wealth, but to confer virtue on a painting.

Accidentally invented in 1704 by the Prussian pigment maker Johann Jacob Diesbach, Prussian blue is regarded as the first modern, artificially manufactured colour. While working on a red cochineal-based colour, Diesbach is believed to have used some discarded potash (potassium carbonate obtained from the ashes of burnt wood) from his fellow alchemist Johann Conrad Dippel. Unbeknown to both, the potash was contaminated with animal blood, which ultimately caused a chemical reaction and created the iron ferrocyanide compound, now known as Prussian blue. The dark intense blue was non-toxic, lightfast, easy to produce and a fraction of the cost of true ultramarine.4 Prussian blue was soon being made as an artist’s pigment in Berlin. Nevertheless, its synthesis remained a closely guarded secret until 1724 when Englishman John Woodward obtained a description of the process and published it in the Philosophical Transactions of the Royal Society. By this time it was also being made in Paris by Diesbach’s pupil De Pierre, with whom he had shared the recipe. By 1750 the colour was widely known and produced thoughout Europe. In 1762 the French chemist Jean Hellot noted, ‘Nothing is perhaps more peculiar than the process by which one obtains Prussian blue, and it must be owned that, if chance had not taken a hand, a profound theory would [have been] necessary to invent it’.5

By 1790 Prussian blue was being exported to Japan via the Dutch who had sole trading rights with the isolated country. By the 1820s Prussian blue was being used by woodblock artists who were keen to find a blue ink that was more stable than the natural indigo and dayflower pigments, which were particularly susceptible to fading. Japanese artist Katsushika Hokusai’s In the Totomi Mountains, c. 1830, is an example of the aizuri-e genre of woodblock prints that emerged in Japan during the 1830s, in response to the introduction of Prussian blue. Aizuri-e refers to works printed entirely or predominantly in blue. The range of tones that Prussian blue offered and its ability to represent light and shade provided printmakers with a new means of rendering spatial depth through the gradation of colour. This, together with its stability and lightfastness, made the colour highly attractive. Many artists, in particular, Katsushika Hokusai and Utagawa Hiroshige celebrated its introduction to the artist’s palette. 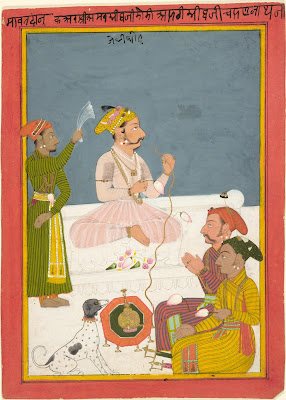 Indian yellow has been known in India since the fifteenth century, but for centuries its ingredients and production were shrouded in mystery to those outside India. It was not until 1883 that the extraordinary process was documented by a Bengali civil servant who informed the British authorities. The pigment was made from the urine of cows who had been fed exclusively on mango leaves. The urine was collected, reduced, then strained and the sediment collected and formed into balls and dried. The poor state of health of the cows led to production being banned in the nineteenth century and it went out of use in the early decades of the twentieth century.

Indian yellow features prominently in the exquisite opaque watercolour paintings of the Rajput and Mughal courts of the sixteenth to nineteenth centuries. These jewel-like paintings draw us into a world of splendour and fantasy through their use of brilliant colour, bold design and astonishing detail. In the late seventeenth-century work of Prince Amar Singh II with sardars, c. 1695–1700, the brilliant luminosity of Indian yellow is used strategically throughout the painting to link the main elements together, as well as providing a unifying golden frame.

Today most artists’ paints are produced using commercially manufactured synthetic pigments, which have excellent tinting strength, lightfastness and chemical stability. The enormous range of pigments continues to grow with colour development driven by industry and the incessant demand for high-performance colour. In 2000, for example, Ferrari introduced the colour ‘Pyrrole red’ for all its red Ferraris, illustrative of the constant innovation that defines the colour industry today, but a world away from the efforts of alchemists producing lustrous artists’ pigments during the Medieval and Renaissance periods.

The exhibition design of Spectrum: An Exploration of Colour has been conceived by Melbourne-based designer Danielle Brustman for the NGV Triennial 2020: ngv.melbourne/triennial2020