The Getty volume is replete with vital lessons on studying and historicizing imperial ephemera. 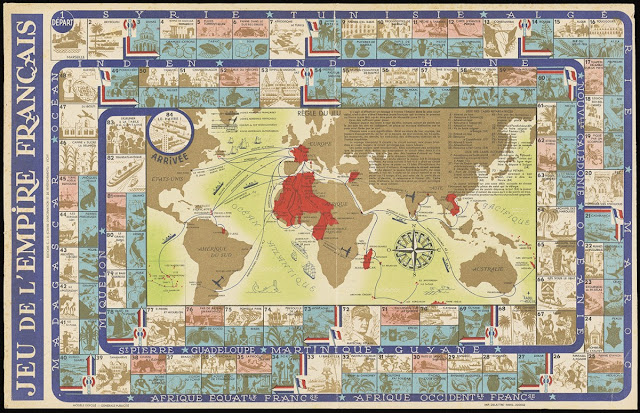 Visualizing Empire: Africa, Europe, and the Politics of Representation unearths dark and mingled tales of an archive haunted by colonialism. In the introduction, editors Rebecca Peabody, Steven Nelson, and Dominic Thomas assert that visual culture is always already immersed in power dynamics, especially when attached to an imperialist agenda. Fittingly, the volume is replete with vital lessons on studying and historicizing imperialist propaganda with an eye toward contemporary resonances.

The archive in question was acquired by the Getty Research Institute in 1997 from the Paris-based Association Connaissance de l’Histoire de l’Afrique Contemporaine (ACHAC) (Knowledge of the History of Contemporary Africa Association). An interdisciplinary group of scholars active since 1989, ACHAC gathers, studies, and curates visual and material culture that narrates colonial and postcolonial African histories. The collection acquired from them by the Getty — 31 boxes of material — is organized around the central notion that these images disseminated by the French Empire warrant further research by scholars across the globe.

Holdings include artifacts and ephemera, essentially propaganda that aimed to inculcate French people into imperialist fantasies of conquering the non-Western world. As such, Visualizing Empire should be understood as building on the work spearheaded by the ACHAC researchers in Paris. Here, US-based scholars offer a robust critical framing of the tactics of French colonial powers so that we may truly reckon with the racist afterlives of this violent system.

In “Decolonizing the ACHAC Collection,” Patricia A. Morton presents a compelling argument, theorizing the ACHAC collection as a “counter archive” to the broader French imperial archive. In analyzing the official poster for the Paris Colonial Exposition of 1931, Morton models the decolonial research facilitated by the collection. She recounts how the poster, popularized at the height of the French empire, yields insights into the racial thinking of interwar France in regards to its colonies: its four “racial types” and Islamic architecture, for example, are indicative of the exposition’s promise of a “tour of the world in one day.” (Human beings from Africa, Asia, and the Americas were likewise on display in the exposition.) Reading against the grain, Morton astutely uncovers that what may appear at face value as a celebration of cultural diversity is actually a coercion of so-called “primitive others” to entertain a white French audience and ultimately convince them to become incorporated into France’s “civilizing mission” — a racist project masquerading as an inclusive one.

Another essay, by Dominic Thomas, reveals the more insidious ways the French imperialist agenda crept into visual culture. In “French Colonialism: The Rules of the Game,” Thomas historicizes how board games such as Jeu de l’Empire Français (The French Empire Game) acquainted French people with the country’s expansive colonial reach. Designed to be visually appealing for children and families, the games aimed to instill a sense of discovery and adventure by making conquest an alluring experience. The tactile and pleasurable qualities of games became yet another popular mode through which the spatial mapping of forcibly seized lands was made accessible to everyday people.

Steven Nelson’s essay, “La France Et Ses Colonies: Mapping, Representing, and Visualizing Empire” engages the imperialist world-making of a map of the French empire printed in Le Petit Journal in 1897. His research parallels the mapmaking aims of the book itself, with the editors and contributing authors each plotting their anticolonial politics onto archival objects within the ACHAC collection. As these are all tangible objects within the archive, these essays chart a decolonial path through the collection that can be followed by current and future researchers at the Getty.

Grounded in the belief that society cannot dismantle colonialist ideology until its foundations are understood, Visualizing Empire is an invaluable teaching tool. By affirming the extent to which imperialism was strategically embedded into national consciousness, the editors remind us that resistance requires knowledge of precisely what is being resisted.