Jane Irish’s work offers an archive of painterly traditions juxtaposed with horrific acts of violence driven by the moneyed class. 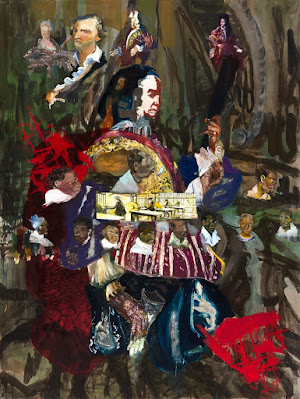 PHILADELPHIA — For the last 20 years, Jane Irish has been committed to making art about the American War in Vietnam and the long-lasting effects of colonial exploitation. Yet it does not look like what audiences might expect. Where many antiwar artists could easily fall into a didactic mode, Irish communicates her critique through embedded references. A machine gun, for instance, may appear as a motif in a painting of a rococo room that looks out on a Vietnamese landscape rather than in the hands of a soldier. Irish embraces allusions and her materials as means to express the historical relationships she addresses in her work.

For most works in the Winter Soldier Series (Tapestry Paintings) (2020), included in Jane Irish at Locks Gallery, she painted with a combination of distemper and oil. Prone to fading, distemper fell out of use after the Renaissance. Oil, on the other hand, has a longer shelf life. Irish wisely puts these characteristics to visual and conceptual use.

She also stitched together irregular pieces of linen and muslin rather than painting on a uniform piece of stretched cotton canvas. The combination of different paints and surfaces creates images, like “Interrogator” (2020), that give the sense that the paintings have been exposed to the elements. In “Interrogator”‘s upper right-hand corner, Irish embeds a small painted section of Bronzino’s “Crossing of the Red Sea” (1542). Bronzino’s depiction of the Israelites leaving Egypt references the 1537 Battle of Montemurlo. Irish’s intertextual artworks posit war as a curse that we can’t escape.

However, the artist hopes that the opposite is true. She told me recently that she’s become increasingly interested in “questioning her roots as an aggressive painter.” She has always approached the canvas with verve, making determined marks. She sees herself in a lineage of painters, like Goya, who have made historical acts of violence part of their work. As she put it, nearly everywhere in Renaissance painting are marks of aggression, byproducts of colonial exploitation and endless wars over territory. She’s started to feel the burden of this legacy, not only as an artist, but also as a citizen.

“Antipodes, Age of Exploration” (2017), with its combination of gestural markings and clear historical underpinnings, brings these traits into our era. White aristocratic figures in Renaissance garb float along the upper periphery of the canvas while a large, white male figure sits at the center of the image. Within the gut of the central figure is the interior of a textile mill. All of these elements loom over the smaller, bust-like depictions of Black slaves in the lower part of the painting. But the specters truly haunting this work are the red ships that mirror each other in the lower-right and mid-left portions of the painting, signifying a loop of endless exploitation and profit.

Irish went on to say that she hopes it will be possible to eliminate aggression not only in her work, but in the work of future artists. This hope emerges from her faith that human nature is not predisposed to violence: humankind, she feels, should have the capacity to evolve into an era of benevolence. 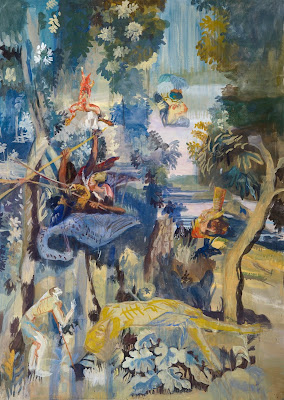 These beliefs have grown in part from her engagement with Vietnam Veterans Against the War (VVAW). Not yet a teenager when the organization was founded in 1967, Irish became interested in the antiwar movement later in life. Over the years she developed a friendship with Purple Heart recipient Scott Moore, who helped organize the Winter Soldier Investigation, from which Irish’s series gets its name. This event, which took place in early 1971 in Detroit, featured testimony from veterans who had participated in war crimes. The participants claimed that their actions were the result of American military policies, and not individual aberrant behavior. A couple of years ago, Moore provided Irish with access to these testimonies, which became a basis for the Winter Soldier Series.

Nathan Hale’s testimony describes how interrogators were told that they could use any method to elicit information, as long as you “don’t get caught.” He adds that he used clubs, rifle butts, pistols, and knives to coax information from prisoners. Later in his testimony, he mentions that the National Field Police hanged two men “just because they thought they were VC [Viet Cong].” In the veterans’ decision to truthfully state the atrocities carried out by American troops in Vietnam, Irish started to see them as artists. For her, subversive acts against mainstream discourse are at the heart of any artistic endeavor.

On the wall opposite the tapestry series, a number of works depict the interiors of late rococo rooms. Irish has frequently painted rooms in this style as a foundation for her explorations of materials and the legacy of colonialism. She also tends to include her painted studies for the larger, more developed work in her exhibitions. For viewers interested in process, these are fascinating.

“Tapestry Hall” (2020) strikes me as a truly virtuosic work. When viewed from different angles and varied distances, the dimensions of the room in the painting seem to shift, while the yellow ceiling and reflective floor, in contrast to the dark left wall, create the dizzying feeling of being in a tunnel. Significantly, the left wall contains echos of “Interrogator” and other works from the Winter Soldier Series. In the exhibition catalogue, Irish describes her inclusion of these images:

I often juxtapose pre-existing images, sometimes from my own work, often with origins in alla prima and archival research, but I do not intend a collage effect, and steer away from photoshopped postmodern constructions. I intend to make believable spaces, but inhabited by subversive imagery that tears the space open with a kind of strife, or simultaneously displays opulence and the cost of opulence.

Irish’s determination to use her art to examine the disturbing history of Western nations, from the Renaissance to our current era, runs deep. Her work offers viewers an archive of painterly traditions juxtaposed, to borrow her word, with a growing compendium of horrific acts of violence driven by the moneyed class’s misplaced sense of entitlement throughout history. As she told me, she has maintained her commitment to exploring the ramifications of the American War in Vietnam to show how far an artist can go with one subject. Thinking back on our conversation, there seems yet another layer to her remark. Her paintings suggest what American history will look like if those who misuse their power remain committed to exploitation for the sake of profit.