ART HISTORY’S ICONIC DEPICTIONS OF DREAMS, FROM THE RENAISSANCE TO SURREALISM 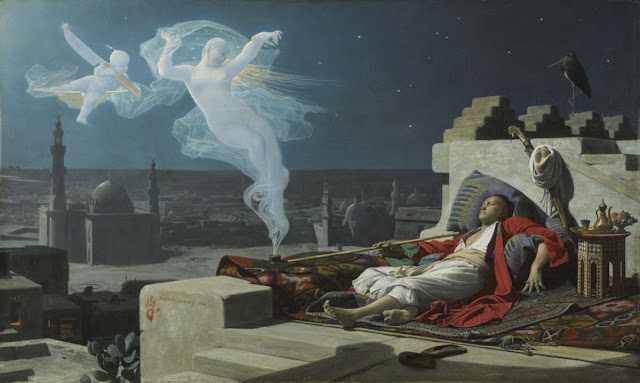 “When we fall asleep, where do we go?” This was the question looming over the long line of teenage girls who recently waited impatiently outside the Billie Eilish merch pop-up in Chinatown. The pop star didn’t invent this question. Philosophers, poets, and psychoanalysts have rhapsodized about the answer for centuries. It’s visual artists, though, who have, again and again, sought to show the impossible—to imagine, in pictures of sleeping subjects, the unseen places we go when we dream. From Godly visions to fantasies to nightmares, the representations of dreams in art have drastically changed since the Middle Ages.
In the Renaissance, as artists and Humanists turned to the writings and art of antiquity, they discovered the ancient philosophers like Hippocrates and Aristotle had been tantalized by the subject of dreams. The 15th-century Florentine philosopher Marsilio Ficino, in particular, took up the task of interpreting the meaning of dreams. His concept of vacatio animae posits that while sleeping, the soul can be freed from the corporeal restraints of the body and achieve a higher, spiritual state.
In art, this spiritual state often took the form of a dozing soul caught in a religious moral dilemma. But dreams also allowed Renaissance artists to heroize the creative imagination and play with sensual, pagan scenes. The Venetian painter Lorenzo Lotto’s Sleeping Apollo and the Muses with Fame (ca. 1549) shows the naked deity napping in an idyllic glade. An angel flying overhead surveys the heaps of discarded clothes and musical instruments, while in the distance, the Muses—reveric stand-ins for the creative imagination—perform an uninhibited dance. 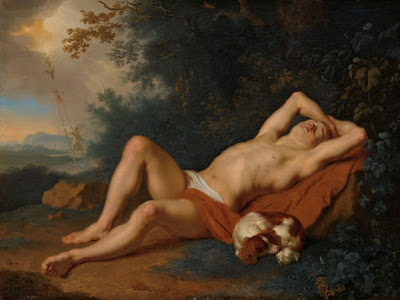 Yet it was the Biblical dream—a communication from God—that artists were most often called upon to represent. The Old Testament stories of Jacob’s ladder and Joseph’s interpretation of Pharaoh’s dream were popular subjects. In both narratives, their dreams become important catalysts for change.
The dream of Jacob (ca. 1500), an oil-on-panel work by Nicolas Dipre, foregrounds Jacob, dressed ethereally in white, reclining outdoors with his head resting on a rock. His prophetic dream, in which angels mount a ladder to heaven, appears tangibly in the landscape behind his enclave. Jacob’s eyes may be closed, but his sight, the painting suggests, is clear.
Divine visions remained a popular challenge for centuries of Western artists, who imbued the well-worn stories with ulterior meanings. Ary de Vois’s version of Jacob’s dream (1660–80) is pointedly sensual. Jacob, nude save for a strategically placed bit of cloth, languorously stretches out on a patch of grass, his idealized body on full display. The ladder and angels appear far in the background, a decidedly less prominent focus of the picture compared with Dipre’s work. Here, Jacob’s vision from God is nearly ecstatic, offering pleasure to the sleeping figure much like Bernini’s famously erotic St. Teresa in Ecstasy (1647–52)………………..
https://www.artsy.net/article/artsy-editorial-art-historys-iconic-depictions-dreams-renaissance-surrealism?utm_medium=email&utm_source=17441175-newsletter-editorial-daily-07-09-19&utm_campaign=editorial-rail&utm_content=st-V