HOW SOCIAL MEDIA IS ALLOWING FOR ILLEGAL ANTIQUITIES TRAFFICKING 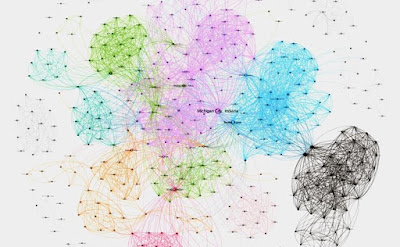 ATHAR is an acronym for Antiquities Trafficking and Heritage Anthropology Research. It is also the Arabic word for “antiquities.” The project is led by two experts on West Asian antiquities who co-authored the report: Amr Al-Azm, a Syrian archaeologist once of Syria’s Directorate-General of Archaeology and Museums and the University of Damascus; and Katie Paul, an anthropologist with years of experience investigating looting and smuggling in the region.

The report, “Facebook’s Black Market in Antiquities: Trafficking, Terrorism, and War Crimes,” published in June, is the result of nearly two years of research — the authors began tracking antiquities trafficking on Facebook in October 2017. (They had previously published an interim report in World Politics Review in August 2018; and their Facebook project was the subject of a BBC story in May 2019.) The new report is naturally much more detailed.

The thing that strikes the reader first about antiquities trafficking organized via Facebook is its sheer scale. For the report, Al-Azm and Paul identified and monitored 95 Arabic-language Facebook Groups (Paul told Hyperallergic that since the report was written this number has risen to over 100) with 488 administrators, and a total of well over 1 million members. The reach of these 95 Groups is global. Only a small portion of these members are likely active buyers and sellers on Facebook — but based on a case study of four groups based in Syria, where the authors show the percentage of active users ranges from 1.6% to 9.3% of total membership, they are still likely in the tens of thousands.

(The exact number of individual members of these groups is uncertain. The authors give a total of 1,947,195 members at the time of the report, but members who belong to more than one group are counted multiple times. Paul said in an email to Hyperallergic that, based on sampling, she estimates that there are over 1,800,000 unique members.)

The report details various aspects of online antiquities trafficking. It shows how integrated these buyers and sellers truly are, in a network spanning not only West Asia, but also several continents. It demonstrates that coins and other small finds, while often ignored in media accounts of more monumental heritage, make up the vast majority of artifacts offered for sale. Al-Azm and Paul also discuss clear examples of looting to order: Interested buyers will post requests for objects they are interested in, and shortly after (sometimes within days) other group members will post images claimed to be of freshly looted objects — some shown still in the ground. In their case study of four Syrian groups, Al-Azm and Paul show that buyers are located predominantly in West Asia (and secondarily in North Africa). They interpret this reasonably as indicating purchases are made primarily by middlemen, who might later smuggle the objects abroad. At the same time, several buyers were located outside the region, particularly in Europe and North America.
The ATHAR Project is far from alone. It is in fact the latest in a series of studies by scholars and investigative journalists on the illegal antiquities trades in West Asia and online. Studies of satellite imagery since 2014 have revealed recent systematic looting at sites in Syria, large and small. Interviews with on-the-ground participants in the trade have provided a wealth of detail and stunning anecdotes, though the information is often hard to confirm. Other studies have investigated the mechanics of antiquities trafficking on internet sites as well as brick-and-mortar dealers and auction houses.

In many cases, the ATHAR Project’s findings corroborate what was already known (or at least suspected) from these previous reports: There was a spike in looting in Syria since 2011; coins and other small finds play the largest role in recent trafficking throughout the Middle East (because they are easy to smuggle and launder); loot-to-order is a common occurrence in antiquities looting (though not necessarily via Facebook). That antiquities trafficking has been made easier by a number of online platforms —from Facebook, to eBay, to Amazon, to WhatsApp — has been clear for several years. One notorious case involved a Coptic papyrus fragment of the New Testament book of Galatians offered illegally for sale on eBay in 2012 — which turned up, two years later, in the possession of Hobby Lobby. It has also been clear that a large percentage of objects being smuggled out of Syria are fake. (While fakes are not singled out by the ATHAR Project report, that many of the objects appearing on Facebook are fakes is clear from the images.) The value of the ATHAR Project report in these cases is to provide hard data and greater detail.
But all of these reports must be read carefully and critically. Many otherwise solid studies overemphasize the role of “terrorists” (often singling out ISIS) in profiting from antiquities trafficking — even though looting in Syria has been conducted or overseen by all parties to the conflict, and ISIS is apparently not responsible for most of it. Sober articles in academic journals that barely mention ISIS are promoted in exaggerated fashion, hyping ISIS from their headlines on. In the case of the ATHAR Project report, its use of the terms “terrorists” and “violent extremists” from the title onward has been amplified by news coverage.

(In an email to Hyperallergic, Paul explained that the report highlights terrorism in order to show that antiquities trafficking continues to fund extremist groups even after the fall of ISIS, since they were never the only such group to profit from these activities.)

Focusing on ISIS or “terrorists” lets other groups, especially state actors like Syrian governmental forces, off the hook for profiting from trafficking. It also reinforces a loaded term. “Terrorists” often ends up referring only to those non-state militant groups that one’s government is not allied with. What matters more: that specific groups labeled “terrorists” are profiting from antiquities trafficking, or that artifacts are being stolen on a massive scale, often to fund continuing cycles of violence by all parties in an armed conflict? Looting expands dramatically under wartime conditions because people are desperate to find ways to survive. Working against antiquities trafficking “must be part of a multidimensional strategy that addresses humanitarian needs,” as Sam Hardy (an expert on conflict antiquities) has put it, “or it may cause further harm.” 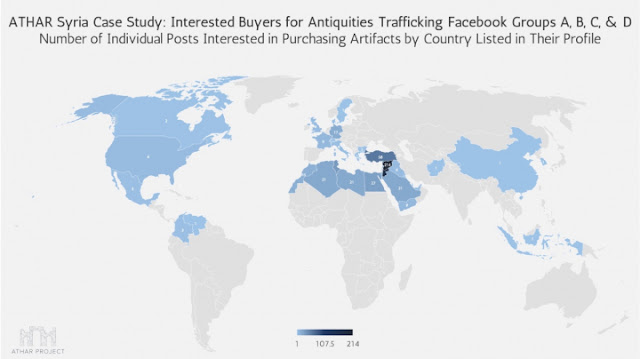 Who is supporting these studies also matters greatly. ATHAR is a volunteer project, but many other studies receive financial support. Between 2014 and 2017, The American Schools of Oriental Research (ASOR) Cultural Heritage Initiatives received millions of dollars in funding from the U.S. State Department — not a disinterested party in various conflicts in West Asia and North Africa. While ASOR CHI has carried out important work in Syria and Iraq (some of which I have cited above) as well as Libya, it has not expanded its purview to Yemen. The fact that the greatest threat to antiquities in the country has been from the coalition led by American ally Saudi Arabia may not be unrelated. Meanwhile, the NGO Antiquities Coalition has joined forces with the Saudi-supported Yemeni government to publicize threats to Yemen’s cultural heritage. The result is that the organization has repeatedly singled out the Houthis (along with Al Qaeda and ISIS) as a threat while ignoring the Saudi role. To its credit, the ATHAR Project report has a section devoted to Yemen, clearly pointing to cases of looting in both Houthi and Saudi coalition held areas. (The reader should note that the Antiquities Coalition has funded work on antiquities trafficking in West Asia, including some previous support for The Day After project of which ATHAR Project co-director Al-Azm is a founder. Paul, the other co-director of the ATHAR Project, previously worked for the Antiquities Coalition. However, in cases such as Yemen it appears that that work may not be nonpartisan but politically motivated.)

Regardless of where their financial support comes from, these projects often carry out important, high-quality work. But these funding sources should make us stop and think: Why are these studies being supported or carried out in the first place?

One reason seems to be to affect government policy. This may be why many of these studies repeatedly use terms like “terrorists” or “violent extremists” or “criminal groups,” since these are popular targets of politicians. Since the publication of the ATHAR Project report, its authors have submitted a letter to the US House of Representatives during counterterrorism hearings. In several studies the authors state clearly that they hope that improved data and models will lead to better policy.

This is a common assumption — that flawed policy results from flawed data. But is it really true? Think about policy discussion in recent years in the US, on issues ranging from gun control to climate change, to healthcare, to home foreclosures. It seems that better data are often not wanted, because the stated goals of legislation are often different from the actual goals. In the case of antiquities trafficking, the continued emphasis on ISIS as a unique looter of antiquities, even after many experts warned for years that all parties in the Syrian civil war have profited from looting, suggests that there is more going on than simply bad data.

Experts would do well to continue to work on the problem of antiquities trafficking — but they (and the rest of us) would also do well to stop and think how that work is framed and used.