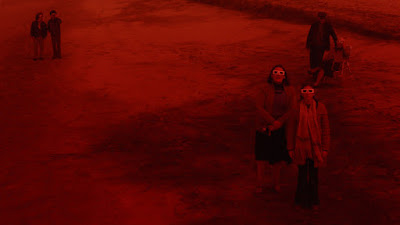 Midway through Rojo, a black-and-white television set emits a commercial in which an actor, wearing a cowboy hat, waving a pistol in the air, and haughtily sucking on a candy, refuses the request of a voice offscreen to try one of his sweets. He then cocks his pistol toward the screen and shoots the bystander down. “Bonafide Caramels — para egoístas!” (“for selfish people!”), bellows the advertisement’s narrator. The message is deafeningly clear: this is a country of haves and have-nots, and those who dare to ask for a single thing from those in power will be swiftly eliminated. President Juan Péron had died the year before, the national economy was in arrears, and a military coup d’état was imminent. 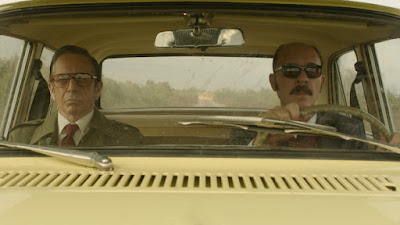 A similar situation — absurd in its mundanity — sets off the plot of Rojo, the excellent third feature by Benjamín Naishtat which runs in New York at the Quad Cinema and Film at Lincoln Center through July 25. Waiting for his wife to join him at a small-town restaurant, a respected lawyer named Claudio (Darío Grandinetti) is accosted by a nervous-looking man who insults him for hogging a table without having ordered anything yet and asks to have it. Claudio acquiesces, but then proceeds to dissect the stranger psychoanalytically, turning the entire canteen into his captive audience. The biting remarks send the outsider into a tirade that recommences when, on their way home, the couple encounters him on the roadside poised to attack. Much like the U.S.-backed military dictatorship would do countless times in its genocidal Dirty War that began one year later, Claudio makes his adversary “disappear.”

The film builds a rich thematic patina by relegating the violent incident to its opening scenes and the ensuing investigation to its very end. Indeed, Detective Sinclair’s arrival on the scene has the feel of a ninth-inning cameo, due somewhat to the casting of the droopy-eyed Alfredo Castro, a regular in the films of Pablo Larraín. This diffuse, episodic narrative structure strips Claudio of much agency and gives him a certain moral ambiguity. As an elder statesman watching tensions in his small town seethe, he resembles a character out of the Old Testament, shepherding his people ahead with a force initially unbeknownst to him. Is he everything that is wrong with Argentina, as Detective Sinclair at one point cries — a callous bully with fascist leanings? Or is the real problem “the hippie,” as his victim comes to be nicknamed, who mistakes petty concerns with true injustices? In either case, Rojo castigates a deadlock of masculine egos, a culture in which psychological malaise cavorts as raw force and façades of decision are buttressed by little else than cowardice; hot tempers and misplaced aggression are the order of the day. Rojo pulsates both with the motif of blood and the subtly indelible image of a solar eclipse, when an orb blots out the sun, obscuring all but its deep red edges.
Rojo is now screening in New York at Film at Lincoln Center and Quad Cinema through July 25.