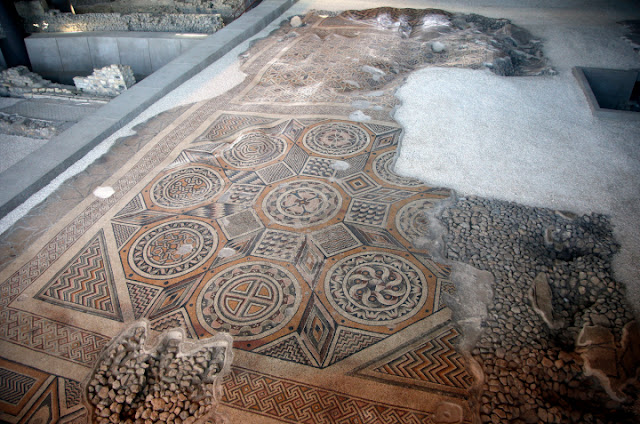 Colossal reports that this year the world’s largest intact Ancient mosaic will be opening to the public in Antakya, Turkey. There are more images of the 9,000 square-foot mosaic on the website, where they explain: “Archaeologists at the site believe the geometric work once decorated the floor of a public building in the previous city of Antioch, one of the most important cities in the Seleucid Empire. Although vast segments of the original mosaic are still intact, others have rippled and disappeared due to a series of earthquakes in 526 and 528 [CE].” (via Colossal)

Carolina Miranda of the LA Times looks at photographer Gordon Parks’s 1961 images of favela dweller Flávio da Silva for Life magazine, which is on display at a current Getty Museum exhibition, and asks the subject what the images meant to him:
When he took the job, Parks couldn’t have possibly suspected that the assignment would indelibly mark the rest of his career. Nor could he have known that it would completely remake the life of his principal subject: Flávio da Silva, a rachitic 12-year-old boy who lived a life of grinding poverty in a favela named Catacomb — Catacumba in Portuguese. Certainly, neither could have imagined that their first brief encounter, on a path that led up a steep Rio hillside, would establish a connection that would last for decades, until Parks’ death in 2006.

“I see him, Gordon Parks — he makes part of the family,” Da Silva, now 70, says with affection in halting English. “Friendship, good friendship.”

There’s shade and then there’s this, architecture critic Inga Saffron offers some remarks on Philadelphia Inquirer columnist Stu Bykofsky’s last day on the job. I mean, wow (the post has some incredible videos of the uncomfortable event too):
Eventually, shortly after one newspaper editor seemingly tried to shut her down with some premature applause, Saffron finished, and Bykofsky got a chance to respond.

He shouted that “half the things she said were lies” and used the phrase “sack of shit lie” at one point. It was downright uncomfortable. Armstrong did her best to settle him down.

Boing Boing let’s us know there’s a huge cache of 1980s noise and post-punk cassettes for your download pleasure. They quote Obscure Media:
This collection is a compilation of underground/independently-released cassette tapes from the days when the audio cassette was the standard method of music sharing… generally the mid-eighties through early-nineties. The material represented includes tape experimentation, industrial, avant-garde, indy, rock, diy, subvertainment and auto-hypnotic materials.

Over at the New York Times Book Review, Chuck Klosterman is asked the age-old question, “You’re organizing a literary dinner party. Which three writers, dead or alive, do you invite?” and his answer is incredible:
I have a lot of issues with this question. I realize the purpose of the hypothetical is to reflect some deeper insight into the subject’s aesthetic sensibility, but I can’t help but take it literally. First of all, I have several friends who have coincidentally written books, and some of these friends I haven’t seen in years. I would obviously prefer having dinner with three old friends as opposed to three famous strangers, regardless of how talented they were as writers. Over the past 20 years, I’ve often found myself in professional situations where I’ve had to have dinner with arbitrary collections of random authors, many of whom were nice and a few of whom are brilliant. Yet the experience itself is almost always uncomfortable. It seems like the first half of dinner involves everybody trying too hard to be overly complimentary to everyone else at the table, and then the second half of dinner is just people complaining about how they don’t sell enough books or make enough money. It never feels like a real conversation unless everyone at the table is drunk. Moreover, the fact that this proposed scenario involves the possibility of selecting guests who are “dead or alive” really forces my hand. It seems insane to pick any living person if dead people are eligible. There is no author alive who’s a fraction as compelling as any dead garbageman, and there’s no theoretical discussion about the craft of writing that would be half as interesting as asking “What was it like to die?” to someone who could respond authoritatively to that query. The only problem is that dead people might not understand what was going on, why they were suddenly alive, or why they were being forced to make conversation with some bozo at a weird dinner party. They might just sit there and scream for two hours. And even if they kept it together, I’m sure they’d be highly distracted. If I invite Edgar Allan Poe to dinner, it seems possible he’d spend the whole time expressing amazement over the restaurant’s air conditioning.

Over at the Nation, Haris Durrani asks if spaceflight is a form of colonialism (which is a topic I’ve long wondered about considering all the artist each to launch work into space, which reminds me of the eagerness of artists during the period of European Colonization that were capture landscapes and other curiosities in their work for patrons who were the beneficiaries of the colonial system):
The postcolonial unrest in French Guiana is not an isolated incident. Because of its proximity to the equator, territory in developing countries is particularly valuable for launching into space, communicating with spacecraft, and monitoring orbit. This March, Jair Bolsonaro signed a deal with Donald Trump to open Brazil’s Alcântara Launch Center to the US space industry. This has revived concerns about the land rights of the quilombola, indigenous black, and poor communities in Brazil. In the 1980s, the Brazilian government displaced the quilombolas when it established the space center, promising economic development that has yet to be realized. Recent scholarship has pointed to the contingencies of launch-site territory, nationalism, and self-determination in India and Kenya. Recently, protesters in Hawaii have attempted to prevent the construction of a telescope on a mountain sacred to indigenous peoples.

Time to “decolonize science“? This story is fascinating:
When a slave in an early 18th-century Jamaican plantation was found with a supposedly poisonous plant, his European overlords showed him no mercy. Suspected of conspiring to cause disorder on the plantation, he was treated with typical harshness and hanged to death. The historical records don’t even mention his name. His execution might also have been forgotten forever if it weren’t for the scientific enquiry that followed. Europeans on the plantation became curious about the plant and, building on the slave’s “accidental finding”, they eventually concluded it wasn’t poisonous at all.

Instead it became known as a cure for worms, warts, ringworm, freckles and cold swellings, with the name Apocynum erectum. As the historian Pratik Chakrabarti argues in a recent book, this incident serves as a neat example of how, under European political and commercial domination, gathering knowledge about nature could take place simultaneously with exploitation.

The Out of the Woods blog ponders if some of the tactics used by the UK-based Extinction Rebellion activist movement are counter productive:
We do not expect any organisation to emerge perfectly formed, of course. This is particularly so at our current moment, with little historical memory of direct action in and as collective struggle. This is in no small part due to the violent actions of the police and the state, who have deliberately and diligently worked to destroy previous collective struggles aimed at ecological flourishing. Yet the severity of our concerns, particularly in light of XR’s anti-democratic structure, means that we do not believe it is worthwhile seeking to reform XR from within (as some of us have attempted to do).

Below we provide our critique of XR’s tactics. In the coming weeks we will publish the second and third parts of our critique, focussing on XR’s organisational form and its strategy, in turn. Whilst XR is establishing groups internationally, our primary focus across the three parts of our critique is on the UK, as this is where the group is currently achieving the greatest amount of traction, and where the knowledges and experiences of the OotW members involved in writing this piece are grounded.

Joseph Bernstein tells the story of right-wing news darling Andy Ngo and what it might tell us about the new wave of online personalities masquerading as journalists:
A little more than two years ago, Andy Ngo was more or less a nobody: a 30-year-old multimedia editor for the student paper of Portland State University, where he was working toward a master’s degree in political science. He had gone back to school after spending several years languishing in the millennial male purgatory of underemployment and aimlessness. He had about a thousand followers on Twitter, where he posted mostly about anti–free speech left-wing campus culture and the need to reform political Islam.

Twenty-seven months later, Ngo is very much a somebody. Though his career output is limited to a few dozen op-eds and news stories, an active Twitter feed, some cable news appearances, and a handful of dramatic protest videos, his name is now regularly uttered by members of Congress — including some who have proposed federal investigations on his behalf — by cable news megastars, and by Joe Biden, the leading candidate for the Democratic presidential nomination. He now has almost a quarter of a million followers on Twitter.

From the Atlantic, “Gay men once developed codes to ensure safety in the hunt for sex. Can they help #MeToo do the same?”:
Read during today’s #MeToo wave, Brown’s vision of a “paradise” packed with men groping unabashedly yet respectfully may sound like a hallucination. But many gay men might not find the scene so strange. Yes, assimilation and smartphones—and, before them, legal crackdowns amid the AIDS crisis—have thinned the ranks of spots like The Club. Even so, 50 years after a police raid on the Stonewall Inn catalyzed the mainstream LGBTQ movement, gay people still maintain spheres of separation from the wider world: nightclubs, vacation spots, and dating apps where like can meet like. In those places, folks who otherwise might edit themselves for the straight world find the miraculous-seeming freedom to directly pursue their desires. This pursuit can take forms as mild as dinner and a movie. It can also involve a crossing of physical boundaries that bears an undeniable resemblance to the surprise kisses and below-belt grabs called out in the recent reckoning with sexual harassment.

LA Taco reports that fake guacamole is becoming a thing in Los Angeles (and probably elsewhere) as avocados become more and more expensive. So watch out:
When blended with the rest of the traditional taqueria guacamole ingredients, the slightly boiled Mexican squash emulsifies into a stunningly bright green guacamole-like salsa. However, the scariest part is that it tastes almost exactly like your standard taqueria guacamole: bright, spicy, rich, and very satisfying. For someone who has eaten over a thousand tacos this last year alone with all kinds of taqueria guacamoles for Las Crónicas research, it almost fooled me.

A man tried to smuggle roughly $45,000 of cocaine into Spain, wait for it … under his toupee! Here’s the whole story but the photos are everything.