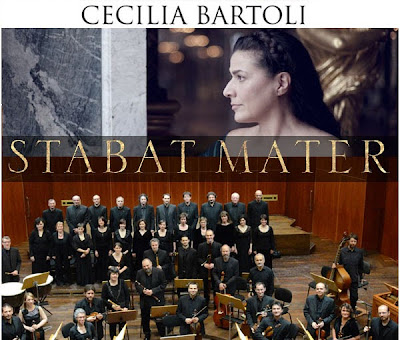 Bartoli leads an array of internationally celebrated singers including countertenor Franco Fagioli, the bass Salvo Vitale and the two young German tenors Daniel Behle and Julian Prégardien. Diego Fasolis conducts the authentic instrument forces of I Barocchisti and the chorus of RSI Lugano.

Steffani's 'Stabat Mater' is his masterpiece, completed shortly before he died in 1728. It has been described as the most powerful expression of his religious fervour and, at almost half an hour, the largest-scale, most complex and heartfelt of his compositions outside his operas. The opening solo 'Stabat Mater dolorosa' featured on the 'Mission' DVD and the album is completed by six world premiere recordings of the best of Steffani's remaining sacred music, including 'Sperate in Deo' and 'Laudate Pueri'. These are scored for orchestra, chorus and soloists featuring two young baroque-specialist sopranos Nuria Rial and Yetzabel Arias Fernandez alongside Behle, Pregardien and Vitale. Finally, amongst these world premieres is 'Non plus me Ligate', a seven-minute solo motet for Cecilia Bartoli.
Publicado por alicia perris en 16:49