Norman Lebrecht and Philip Hensher debate two musical greats to celebrate the composers' joint bicentenary.
By Lottie Butler (Assistant Content Producer)
On Sunday 15 September at 6pm Stephen Fry will chair the Intelligence²  200th Birthday Debate: Verdi vs Wagner at the Royal Opera House. Tickets are sold out, but you can join us online on the ROH website (or on the Intelligence² website) to watch the event live.
From the passionate romance of La traviata to the vast mythical world of the Ring cycle, Guiseppe Verdi and Richard Wagner are undoubtedly two of the greatest opera composers of the 19th century. Although equal in stature, their work demonstrates very different perspectives on art and culture. Verdi’s music includes some of opera’s most popular melodies and is felt by some to encompass both high and low culture, while Wagner’s epic compositions are considered by advocates to mark the peak of technical and intellectual genius. 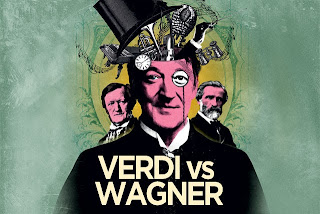 Award-winning writers and cultural commentators Norman Lebrecht and Philip Hensher will each champion one of the composers, illustrating their points with musical extracts performed by Southbank Sinfonia with conductor Paul Wynne-Griffiths.
The debate forms parts of Deloitte Ignite 2013, Verdi/Wagner. Curated by Stephen Fry, the festival explores the music of Verdi and Wagner in what we hope will be innovative and creative ways. Other events include Inside Wagner’s Head, a one-man show by Simon Callow; performances by Gandini Juggling; a new musical piece based upon the legend of Tristan und Isolde by Julian Joseph; and the chance to take part in a day of workshops celebrating choral music. Find out full details of the programme.