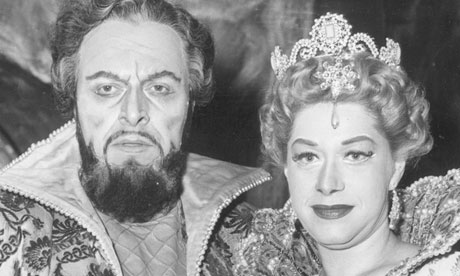 Regina Resnik with Boris Christoff during rehearsals of Boris Godunov at the Royal Opera House, Covent Garden, London. Photograph: Ron Burton/Getty Images
First as a soprano, and later as a mezzo-soprano, Regina Resnik, who has died aged 90, was a singer of international fame for more than four decades following her unexpected debut at New York's Metropolitan Opera in 1944, when she was only 22. Gifted as both a singer and an actor, she brought presence and allure to many lyric-dramatic parts in her early years at the Met, and then developed an even more auspicious career as a mezzo in such roles as Carmen – as I recall from her Covent Garden debut in 1957 – and Klytemnestra in Richard Strauss's Elektra, which she sang unforgettably in Georg Solti's famous 1967 recording.
Regina was only just American by birth. Her immigrant Ukrainian parents, Sam and Ruth Resnick (she dropped the "c" for her performing name), were stranded on Ellis Island off New York while her mother was pregnant with her. However, by the time of her birth they were in the Bronx. She studied music education at Hunter College, New York, graduating in 1942.
Though the US had entered the second world war following the Japanese attack on Pearl Harbor the previous December, musical life was not much affected. Resnik was recruited by Fritz Busch, the first music director of Glyndebourne, who had fled Europe and formed the New Opera Company in New York. At the age of 20 she made her stage debut with the company under Busch as Lady Macbeth. Luckily Resnik's voice could stand the strain of such a taxing role. She later commented: "I had the gift of a very strong throat."
Next she was singing Leonore in Fidelio in Mexico City under Erich Kleiber's baton. Then she had a year with the New York City Opera, singing Micaëla (Carmen) and Santuzza (Cavalleria Rusticana). She was engaged by Edward Johnson, general manager of the Met, on the strength of having won the house's Auditions of the Air, taken on a radio show, in 1944. Her premature debut – as Leonora in Il Trovatore – came about through the illness of Zinka Milanov, then the Met's reigning diva, whom Resnik was understudying.
Three days later she made her scheduled debut as Santuzza, another Milanov part, and two weeks after that Aida, followed by Leonore (under Bruno Walter), an amazing series of heavy parts for such a young artist. In the next six years with the company, she added, among others, Ellen Orford in the New York premiere of Peter Grimes, Princess Eboli (Don Carlos), Alice Ford (Falstaff), Tosca, Musetta (La Bohème) and Sieglinde (Die Walküre). Meanwhile she developed an appreciable presence in concert, singing in Beethoven's Ninth Symphony, Verdi's Requiem and Rossini's Stabat Mater, all demanding assignments.
In 1953 she made her debut at the Bayreuth festival as Sieglinde, conducted by Clemens Krauss, an event preserved on disc. By this time her voice was beginning to darken. On the advice of the baritone Giuseppe Danise, she retrained as a mezzo, and very soon established herself in her new range as a Carmen of presence and dramatic power, as she demonstrated at the Royal Opera House, with the advantage of singing opposite Jon Vickers as Don José. She later appeared at Covent Garden as a seductive Marina in Boris Godunov, a ripely amusing Mistress Quickly in Falstaff and an appropriately decadent Klytemnestra, a role she sang to all the great Elektras of the day. In 1960 she sang Eboli at the Salzburg festival.
Meanwhile at the Met she created the Baroness in Samuel Barber's Vanessa (1958), and undertook Amneris (Aida), Ulrica (Un Ballo in Maschera), Azucena (Il Trovatore) and Laura (La Gioconda) in the course of more than 300 performances. At the San Francisco Opera in 1972 she sang Claire in the American premiere of Gottfried von Einem's Der Besuch der Alten Dame (The Visit of the Old Lady).
In 1987 Resnik was invited by Hal Prince to sing Frau Schneider in his Broadway staging of Cabaret, and in 1990 she returned to New York City Opera, now as Mme Armfeldt in Stephen Sondheim's A Little Night Music. She had already begun directing opera with some success, and also gave masterclasses on interpretation.
Her recordings of the roles of Carmen, Klytemnestra and Mistress Quickly disclose her rich-hued, strongly projected voice, allied to true musicianship and interpretative wit. She was a ruthlessly dedicated artist, a good businesswoman and a stimulating companion.
Resnik is survived by a son from her first marriage, which ended in divorce, and a brother. Her second husband, the artist and designer Arbit Blatas, collaborated with her on a number of opera productions in North America and Europe; he died in 1999.