21 November 2015 – 28 March 2016. Spectacular objects, drawn from a single private collection, will explore the broad themes of tradition and modernity in Indian jewlery.

Spectacular objects, drawn from a single private collection, will explore the broad themes of tradition and modernity in Indian jewellery. Highlights will include Mughal jades, a rare jewelled gold finial from the throne of Tipu Sultan, and pieces that reveal the dramatic changes that took place in Indian jewellery design during the early 20th century.

The exhibition will examine the influence that India had on avant-garde European jewellery made by Cartier and other leading houses and will conclude with contemporary pieces made by JAR and Bhagat, which are inspired by a creative fusion of Mughal motifs and Art Deco ‘Indian’ designs.

Sponsored by Wartski
Founded 150 years ago in North Wales, Wartski is celebrating its anniversary by sponsoring this major exhibition of jewellery. Wartski is a family business specialising in goldsmiths' work, antique jewellery, Russian works of art and especially that of Carl Fabergé. Over the years the firm has sold many outstanding masterpieces including thirteen of Fabergé’s Imperial Easter Eggs.

Its customers have included six generations of the British Royal family as well as celebrated artists, musicians, actors and museum curators throughout the world. From the early 1950’s, the firm’s late chairman Kenneth Snowman published a number of scholarly books, elevating the business to a new level of excellence at which expertise and research were not by-products of the trade, but primary objectives in their own right. Wartski – The First 150 Years by Geoffrey Munn was published by ACC in May 2015. 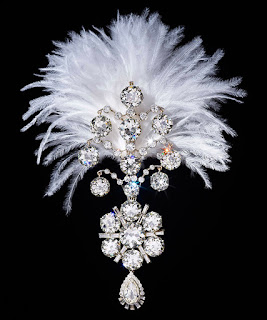