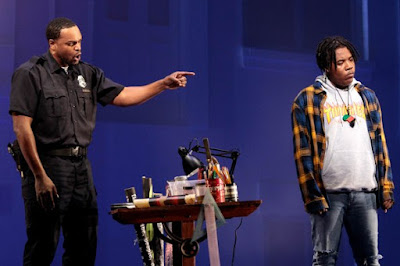 BREAKING NEWS – “Say their names!” has become a familiar rallying cry at protests against the death of George Floyd and many other black people killed by police in America. In the opera Blue, a powerful and deeply moving collaboration between the distinguished playwright/director Tazewell Thompson and Tony Award-winning composer Jeanine Tesori, the black protagonists are nameless in order to highlight the systemic racism of American society. The work, which had a widely acclaimed world premiere – including a review in these pages – at the Glimmerglass Festival in 2019, tells the story of an African-American family living in contemporary Harlem; the father is a police officer whose teenage son is shot dead by a white policeman. Referring to the murders of Ahmaud Arbery in Georgia and Floyd in Minnesota, Thompson said that it’s clear that “the subject of Blue has no shelf life.”

Indeed, in light of recurring incidents of police brutality and the fact that communities of color have been disproportionately impacted by COVID-19, the work seems even more urgent than when it was created. In 2015, Francesca Zambello, artistic and general director of Glimmerglass, had sent Thompson an email saying she was “interested in commissioning an opera about race in America; where we are today, as a country, dealing with this issue.”

Now, in announcing a decision reached months before the current wave of nationwide protests, the Music Critics Association of North America (MCANA) has named Blue as the winner of its fourth annual Award for Best New Opera. The prize recognizes musical and theatrical excellence and honors both composer and librettist for an opera that premiered during the past year in Canada or the United States. The runners-up were Fire Shut Up in My Bones by Terence Blanchard and Kasi Lemmons (Opera Theatre of Saint Louis) and prisoner of the state by David Lang (New York Philharmonic). Previous winners were p r i s m by Ellen Reid and Roxie Perkins; The Wake World by David Hertzberg, and Breaking the Waves  by Missy Mazzoli and Royce Vavrek.

Lyric Opera of Chicago (originally scheduled to mount Blue in June) and the Minnesota Opera have announced plans to present Blue early in 2021.  Unfortunately, other scheduled performances at the Washington National Opera – where Zambello is artistic director – this past March and at the Mostly Mozart Festival in July, had to be canceled due to the pandemic.

Blue is the result of inspired teamwork between Thompson and Tesori, one of the first two women commissioned by the Metropolitan Opera. Tesori said she is pleased that opera librettists, often overshadowed by composers, are now receiving well-deserved credit. She referred to Thompson’s libretto for Blue as an example of his “poetic genius.” Indeed, Anthony Tommasini wrote in his review for The New York Times that “Mr. Thompson has written one of the most elegant librettos I’ve heard in a long time.”………………