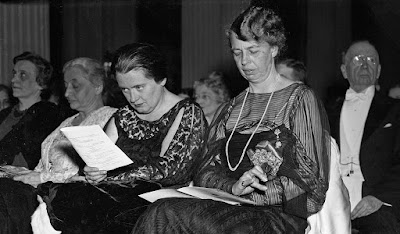 When Franklin Roosevelt was elected president of the United States in November 1932, his wife, Eleanor, made an extraordinary admission to the Associated Press reporter on the Roosevelt beat. “Being a Democrat, I believe this change is for the better,” she said, but she “never wanted to be a president’s wife. . . . Now I shall have to work out my own salvation.” A devotee of progressive causes and a veteran political helpmate (Franklin had been assistant secretary of the Navy and then governor of New York), Eleanor didn’t shrink from public service; but she was dismayed at the loss of privacy being a first lady would entail, and she worried that her position would keep her from the activism that gave meaning to her life.

Paradoxically, it was the A.P. journalist, Lorena Hickok, who helped her find her equilibrium. Hickok was a tough-minded beat reporter with a nose for a story, and Eleanor — a Good Wife who had looked the other way at her husband’s infidelities — could have been the scoop of a lifetime. But Hick, as she was called, fell in love with her subject, and at least for a time Eleanor reciprocated. Realizing she couldn’t cover someone she had feelings for, Hick resigned from the A.P. and all but moved into the White House. Formally she worked for Harry Hopkins, the head of the New Deal relief programs — a job Eleanor arranged — and reported, brilliantly, from the field about the lives of those affected by the ravages of the Depression. But she also functioned as Eleanor’s increasingly necessary confidante, cheerleader and intimate partner.

In “Eleanor and Hick,” Susan Quinn, the author of several books including a biography of Marie Curie, is both circumspect and suggestive about the nature of their relationship: While maintaining (on slender evidence) that “Eleanor was usually uncomfortable with physical intimacy,” she describes a car trip on which Hick and Eleanor were “together as a couple, all day and all night.” Eleanor herself seized the bull by its ambiguous horns: “No one is just what you are to me,” she wrote Hick. It was true. Hick was not only a personal safety-valve (“I blow off to you but never to F!” ), she advised the spotlight-averse Eleanor to hold weekly news conferences — for women only — and pushed her to repurpose the chatty, personal accounts of her life she included in their correspondence and turn them into the hugely popular newspaper column “My Day.” And she brought Eleanor to Appalachia, where the two of them founded a public-private resettlement community called Arthurdale, for unemployed and impoverished miners and their families.