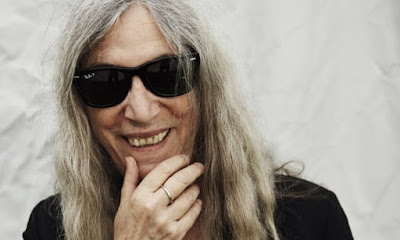 At the start of 2016, Patti Smith’s friend the producer, manager and rock critic Sandy Pearlman was hospitalised after suffering a brain haemorrhage. She first met him in 1971 when he attended one of her performances during which she read poetry against a backdrop of feedback, courtesy of guitarist Lenny Kaye. Pearlman approached Smith after the show and suggested she front a rock band, but, as she recalls in her new memoir: “I just laughed and told him I had a good job working in a bookstore.” Later she took his advice and went on to make the landmark punk album Horses. Their friendship endured, leading her and Kaye to his bedside nearly 50 years later as he lay in a coma. “We stood on either side of him, promising to mentally hold on to him, keep an open channel, ready to intercept and accept any signal,” Smith writes. But the signal never came; six months later, Pearlman died.

Her account of 2016 shows it was a difficult year all round. Along with the loss of friends, she is poleaxed by the rise of populism, the dirtiness of the US election battle and looming environmental catastrophe. She is also discomforted by her impending 70th birthday. And so, after a run of New Year gigs at the Fillmore in San Francisco, and a stretch back in her leaky New York flat, Smith engages in what she calls “passive wandering, a small respite from the clamouring, the cries of the world”. She travels to Arizona, California, Virginia and Kentucky.
In the latter, she visits her friend and former partner, the playwright Sam Shepard, who is almost bedbound and nearing the end of his life. Shepard’s final book The One Inside is close to completion but, as the act of writing becomes increasingly difficult, he calls on Smith to be his amanuensis. Elsewhere, she goes to Lisbon, where she visits the poet Fernando Pessoa’s house, and looks through his personal library, and to her bungalow in New York’s Rockaway Beach where she clears out the dust, sits on the porch and gazes at the insects and the flowers.

Typically for Smith, portents and symbols lurk in unexpected places, and everyday objects become freighted with meaning. Photographing them with her trusty Polaroid camera, she basks in the memories evoked by her father’s cup, a motel sign, a suit worn by the artist Joseph Beuys and a book of poems by Allen Ginsberg. She imagines her old chum Ginsberg fearlessly grappling with the current political turmoil. He “would have jumped right in, using his voice in its full capacity, encouraging all to be vigilant, to mobilise, to vote, and if need be, dragged into a paddy wagon, peacefully  disobedient”.
Year of the Monkey is often maudlin, a reflection both on mortality and of the times in which Smith finds herself, but rich in detail. She reads endlessly, strikes up conversations with strangers, takes walks in the middle of the night and drinks gallons of coffee. At one stage she lists the contents of her suitcase – “six Electric Lady T-shirts, six pair of underwear, six of bee socks, two notebooks, herbal cough remedies, my camera, the last packs of slightly expired Polaroid film and one book” – which reveals much about her day-to-day needs. She cadges lifts from oddball types, among them the couple who forbid her to talk while they are driving and abandon her at a gas station when it becomes clear she can’t stay silent, and the garrulous Cammy, who has a car boot full of pickling jars. Smith also dreams vividly, leading to seemingly normal scenes suddenly bending out of shape as you realise she has slipped into unconsciousness. Indeed, the narrative moves constantly between reverie and memory; it’s invariably left up to us to work out which is which.

Both mundane and magical, this book is a world away from Just Kids, Smith’s award-winning 2010 account of her relationship with the photographer Robert Mapplethorpe, though the unique artistry of her prose remains. There are greater similarities to M Train, Smith’s previous memoir which found her staying in hotels or shuffling around her apartment, watching Inspector Morse and Midsomer Murders reruns on TV. Here she once again cuts a solitary figure prone to forgetfulness, who falls asleep in her coat a lot, and holds conversations with inanimate objects. The ghosts of those she has lost – her mother, her husband, her brother – remain close.

Smith lives much of her life in the past but her account of her wanderings shows us who she is now, and the stories and dreams that occupy her. She is not without optimism – “Our quiet rage gives us wings, the possibility to negotiate the gears winding backwards” – but exists with a keen awareness that there is no overcoming the passing of time or the limits of the imagination. As she notes in the epilogue, “the trouble with dreaming is that we eventually wake up”.