For years, only the Los Angeles Free Press chronicled the many incidents of police violence in Los Angeles, making crucial connections between racial disenfranchisement and mass unrest. 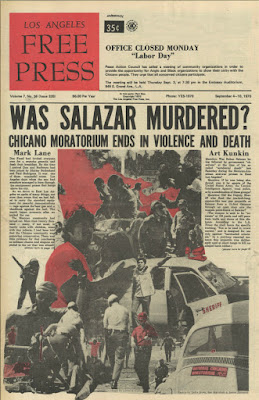 (image courtesy Los Angeles Free Press)
In the 1960s, Los Angeles was an epicenter of civil rights uprisings fueled by the hypocrisy of its liberal establishment. The mayor, police chief, and paper of record actively suppressed Black, Chicano, and queer liberation movements throughout the city while promoting a narrative of democracy under siege. For years, only the Los Angeles Free Press documented the many incidents of police brutality, making crucial connections between racial disenfranchisement and mass unrest.

The Free Press (informally known as “the Freep”) centered BIPOC struggles against white supremacy when no one else would, resulting in death threats against staff members and an office bombing in 1968. The underground newspaper’s local reporting, commentary, and political cartoons openly mocked city officials as they wavered on issues of race, class, and sexuality. Front-page editorials detailed the denialism of Mayor Sam Yorty, Chief William Parker, and the Los Angeles Times — who argued that LA’s communities of color had no grievances and that outside agitators were escalating protests. Much of the Free Press is still available to read online, and it’s worth exploring the archives for evergreen articles and stunning cover designs. 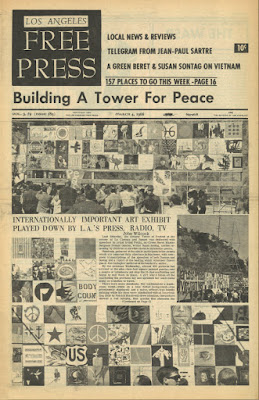 Founded by Trotskyite socialist Art Kunkin in 1964, the Freep quickly earned a reputation for its coverage of demonstrations and exposés on discriminatory police practices, such as stop and frisk. It was known for publishing young Black, queer, and transgender organizers who reported from the frontlines under pseudonyms. Kunkin sought to create his own version of the Village Voice without pandering to the Democratic center, as he claimed the Voice often did. The first issue of the Free Press appeared at the KPFK Renaissance Pleasure Faire, and early success among radical-left readers allowed for wider circulation (around 100,000 weekly issues at its peak in 1970). From the beginning, the paper published perspectives from the city’s Black communities, many of which had been redlined from suburbs, harassed by white newcomers, and pushed into the urban center.
The Freep’s coverage of the 1965 Watts Rebellion featured interviews with protestors in the streets — a rarity at the time — urging citizens to condemn the LAPD’s aggression. The series of protests started when white police officers fought with Marquette Frye and his stepbrother Ronald after pulling them over in the predominantly Black neighborhood, but the root cause was much deeper. Six days of skirmishes with cops resulted in 34 deaths and more than 4,000 arrests. “Attempts to simply establish ‘law and order,’ to simply establish the pre-demonstration status quo, are doomed to failure,” Kunkin wrote in a front-page editorial. These articles appeared alongside a map of the city with the downtown blacked out, symbolizing the concentrated area of segregation (note: the paper contains outdated language based on its time of publication). An LA Times front-page headline that same week read “‘Get Whitey’ Scream Blood-Hungry Mobs.” 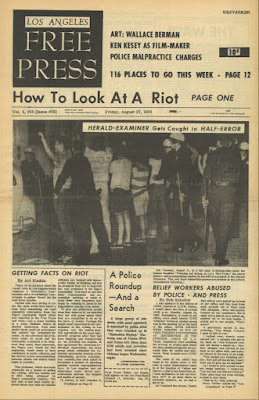 The Free Press framed protests as logical responses to rising unemployment, segregated schools, and decrepit housing conditions. Many of the city’s prominent newspapers were too conservative to publish stories from this angle, giving the Freep leverage in the communities it covered. Readership expanded so much after Watts that it devoted a special mid-week issue to the Century City police riots of 1967 — when unprovoked officers attacked Vietnam War protestors outside the Century Plaza Hotel as President Johnson launched his reelection campaign. “They are ready for summer … Are you?” an ominous headline reads, with a full-page design of riot gear and weaponry. A red Cancer symbol appears near a gun barrel and mob control stick to commemorate the summer solstice, and perhaps to amplify how things were heating up.
The LA Times claimed the city was not known for demonstrations, yet earlier that same year the Free Press covered protests following police raids on the Black Cat Tavern — a precursor to Stonewall in New York. The paper would regularly assist the public in handling different interactions with law enforcement. The cover of an August 1968 issue gave readers a detailed breakdown of police codes. And in 1969, the Freep published the names and addresses of 80+ undercover drug enforcement officers in an attempt to shut down their covert operation. The subsequent lawsuit from the federal government haunted the publication until its closure in 1978.
For 14 years, the Free Press offered a counter-narrative to mainstream media by demonstrating the corrosive effects of police violence. To this day, the Freep remains one of the only proper news sources to contextualize the murders of anti-war protestor James Rector in 1969 and LA Times columnist Ruben Salazar in 1970. Its contribution to the city warrants revisiting more than ever, as government officials continue to reckon with their complacency in state terror.