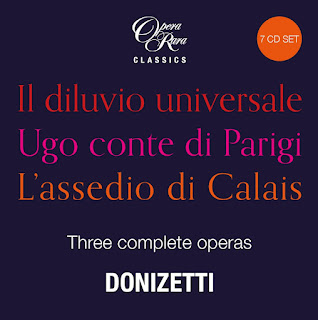 Opera Rara’s 50th anniversary celebrations culminate on 24 September with the release of a limited-edition boxset of three Donizetti operas composed at the height of his popularity in Italy: Il diluvio universale (The Great Flood, ORC31) of 1830; Ugo conte di Parigi (Hugo, Count of Paris, ORC1) of 1832; and L’assedio di Calais (The siege of Calais, ORC9) of 1836. 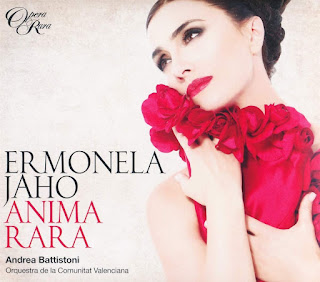 Remastered to the highest audio quality and accompanied by a newly commissioned essay by Donizetti specialist and Opera Rara’s Artistic Dramaturg, Roger Parker, this 7-CD boxset includes performances from early stars of the company Della Jones, Janet Price and Yvonne Kenny. The three recordings which remain collector’s items for lovers of bel-canto were released in 1978 (Ugo conte di Parigi), 1989 (L’assedio di Calais) and 2006 (Il diluvio universale) and have been out of the catalogue for more than 10 years.

When Patric Schmid and Don White conceived Opera Rara in 1970, their dream was to establish a Donizetti collection that would document all his operas through recordings. With nearly 70 operas to his name, this was no small ambition, particularly as only a handful were widely known at the time. 50 years on, Opera Rara continues to build on its acclaimed and extensive catalogue of rediscovered works by this prolific composer. In 2019, Opera Rara released the world première recording of L’Ange de Nisida (ORC58) taken from concert performances of the world première at the Royal Opera House, Covent Garden in July 2018; and, in January 2021, the company released its 26th complete opera by Donizetti, Il Paria (ORC60).

This December, Carlo Rizzi will conduct his first full opera with Opera Rara since becoming Artistic Director. The performance of Leoncavallo’s Zingari with the Royal Philharmonic Orchestra at Cadogan Hall boasts an international cast led by Carlos Álvarez and Krassimura Stoyanova. Zingari, which was first heard at London’s Hippodrome Theatre in 1912, is the company’s fourth verismo project, an area of repertoire - together with French grand opéra and operetta - which the company began to explore under Rizzi’s predecessor, Sir Mark Elder.

Opera Rara’s 50th anniversary celebrations began in autumn 2020 with the release of Ermonela Jaho’s first solo disc, Anima Rara. Earlier in the year, Opera Rara presented Jaho in her Wigmore Hall debut where she performed many of the works featured on the album. Anima Rara proceeded to win a 2021 International Classical Music Award and has been nominated for awards in the 2021 Opus Klassik and Gramophone Awards.