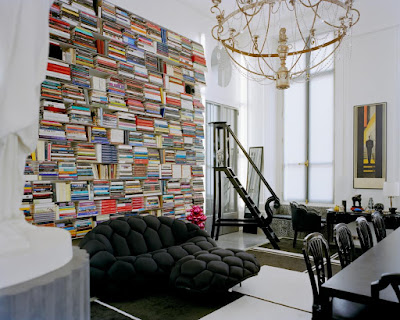 Karl Lagerfeld’s Estate auction, held over two weeks in December 2021 by Sotheby’s, will take place in Monaco and Paris, and online, where bidding opens 26 November, 10am CET. Among the treasures for sale are the contents of various spaces belonging to the fashion designer, photographer and collector, who passed away in February 2019: his 19th-floor apartment in Monaco’s Millefiori tower; his 19th-century house in Louveciennes near Versailles, where the poet Leconte de Lisle was once a frequent guest; his apartment at 17 quai Voltaire in Paris; his office at 15 rue des Saint-Pères; and the never-before photographed apartment opposite, at 8 rue des Saint-Pères.

The designer purchased 8 rue de Saint-Pères in 2008 and renovated it himself. Revealed for the first time here, the result is both modern and classic, with a formality to the apartment interior design and something wonderfully old-school about the back of the home, where mirrored double doors lead to hidden kitchens, bathrooms, storerooms and service entrances. Almost every wall is covered in shelving piled very neatly with books. The wall-mounted white powder-coated steel bookcase design, a system created by Lagerfeld, can also be found along the walls of his quai Voltaire apartment (photographed by Benjamin Bouchet in 2017 for Wallpaper* magazine’s ‘Subscribers Since... 1996’ portfolio).

Lagerfeld used both apartments in his day-to-day life; the extra space came in very handy for a collector of his stature. There are more pieces here by the likes of Konstantin Grcic and Ronan and Erwan Bouroullec than I have ever seen at an exhibition at Galerie Kreo, one of Lagerfeld’s favourite Parisian haunts. The designer had a 25-year relationship with the gallery’s founders, Clémence and Didier Krzentowski, and amassed a collection of around 100 pieces.

In the entrance lobby sits Grcic’s 2018 ‘Volumes’ collection in Bleu de Savoie marble; Lagerfeld bought each of the six pieces from the show in duplicate, choosing to pair them up. Lining the walls of the staircase are eight of the Bouroullecs’ 2010 ‘Roches’ shelves, made of extra matte lacquered basalt grey fibreglass (a second set of five is installed upstairs in the dressing room).

Next to the Grcic collection are the 2007 ‘Black Sun’ and ‘Mirror One’ mirrors, both in silicon carbide, by Martin Szekely. ‘Mirror One’ is cleverly placed behind an early 20th-century woman’s head in white marble on a pink marble base, allowing the ponytail on the back of the head to be viewed when passing.

It’s this pairing of contemporary minimal design pieces with more decorative artworks that is so unique. In the drawing room, Maarten Van Severen’s 2006 long black Bakelite desk (also from Galerie Kreo), 2.7m of starkness, is paired with a set of 19th-century Louis XVI-style black lacquered wooden chairs. An 18th-century chandelier and a towering late 18th-century sculpture of two women holding an Athénienne stand, attributed to Nicolas-François-Daniel Lhuillier, sit next to a black ‘Quilt’ sofa by the Bouroullecs from Established & Sons.

Off of the drawing room is a study, where Ron Gilad’s ‘Dear Ingo’ chandelier from Moooi fills the high ceiling. Among the bookshelves is an art deco desk and chair from Louis Süe et André Mare circa 1920 (Lagerfeld amassed around 30 pieces from these French designers), another of the Bouroullecs’ ‘Quilt’ seats, and Marc Newson’s 2008 ‘Carbon’ ladder from Kreo. Newson was another of Lagerfeld’s personal favourites (Newson’s wife Charlotte Stockdale worked with the designer as a stylist for Fendi). Included in the sale is an Hourglass from Ikepod Watch Co and the 2008 ‘Atmos’ clock from Jaeger-LeCoultre, a gift from Newson..................