During the tumultuous years between 1913 and 1939, numerous British artists and expatriates linked to Vorticism, Futurism, and the Grosvenor School of Modern Art turned to printmaking to convey the vibrancy and innovation, as well as the destruction and turmoil, of contemporary life. Modern Times: British Prints, 1913–1939 will feature more than 100 outstanding and rare works on paper made during this period. Their subjects—which included factories and underground trains, war-torn landscapes and “dazzle ships,” leisure activities, and the countryside as both idealized rural landscape and one transformed by urban expansion—reveal an interest in speed, motion, labor, industrialization, technology, and modernity broadly considered. In addition to traditional printmaking methods, artists embraced new techniques, such as the color linocut, which represented the artists’ democratic aspirations for both art making and collecting. 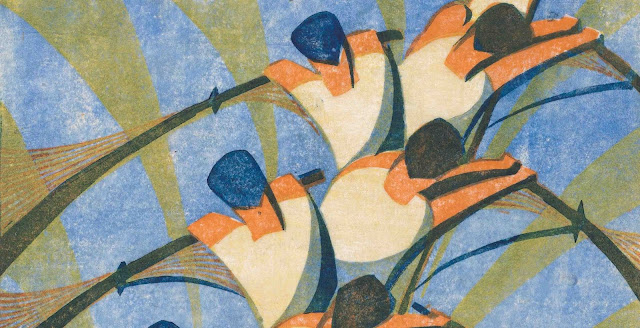 The exhibition will celebrate the transformative acquisition of British modernist works on paper from the collection of Leslie and Johanna Garfield, the most significant collection of its kind. Featured artists include Sybil Andrews, Claude Flight, Christopher Richard Wynne Nevinson, Cyril Power, and Edward Wadsworth, as well as international artists who worked or studied in Britain, such as Edward McKnight Kauffer and Lill Tschudi. Visitors will gain a greater and more comprehensive understanding of the artists’ oeuvres, printmaking, and British modernism as a whole in the years bracketed by two world wars.