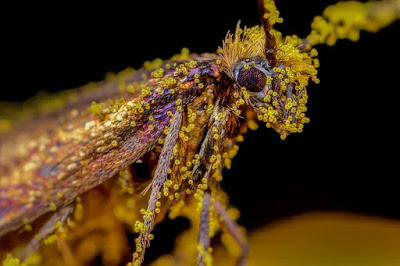 A Micro-moth (Micropterix calthella) covered in golden balls of pollen from a creeping buttercup flower found in Mutter’s Moor near Sidmouth, Devon, UK. The final image is a compilation of focus-stacked pictures. This image was the runner-up in the Small World category of the Nature TTL Photographer of the Year competition. You can see more images in the a Winners Gallery. (image © Tim Crabb, courtesy Nature TTL Photographer of the Year 2022)

Dwight Garner’s New York Times review of Jared Kushner’s new memoir is delicious, but still doesn’t excuse the newspaper’s role in getting his father-in-law (Trump) elected partly by having an unhealthy fixation on Hillary Clinton:

You finish “Breaking History” wondering: Who is this book for? There’s not enough red meat for the MAGA crowd, and Kushner has never appealed to them anyway. Political wonks will be interested — maybe, to a limited degree — but this material is more thoroughly and reliably covered elsewhere. He’s a pair of dimples without a demographic.

The Smithsonian National Museum of African American History and Culture has hired a new digital curator and her name is Dorthy Berry. Morgan Jerkins interviews Berry for her substack:

Did you know early on that you wanted to be an archivist?

No. When I was little, I wanted two things: to be an opera singer and a professor of fairy tales at Oxford University. I don’t even think I had ever even heard opera. I had a book of classic fairytales, which is not a kid’s book.

This book had the first English language printed edition of classic fairytales. But what I really liked, because I don’t feel like I really understood the fairy tales as well in that book, was the introduction, ‘cause each story had an introduction that talked about the history of it.

I took classical voice for like 12 years. I have a degree in vocal performance and decided that I didn’t wanna pursue a career in that because that is a lot of struggle and you can always sing in your life. Having salaries and insurance and stuff is pretty cool in our society.

Even the archives thing, it sort of…I fell into it because I like history. And so when I was in doing my music undergrad degree, I had a class in 20th century styles and techniques of sound and I was like, oh, actually I’m really interested in this musicology thing.

Maybe I wanna do that. Who knows? And so I applied to some different schools, but also because I don’t come for money, I was like, but I need to do something that you can get a job in. So I’ll get this library degree too. It just kind of tumbled forward.

Damien Hirst is looking for more attention, I mean plans to burn thousands of his repetitive paintings, according to Harriet Sherwood at the Guardian:

He created 10,000 unique dot paintings in 2016, each with its own title, that were later linked to corresponding NFTs and sold for $2,000 each. Buyers were given the option of keeping the NFTs or trading them in for the physical artwork. “The collector … cannot keep both. This exchange is a one-way process, so choose carefully,” buyers were told.

Twenty-four hours before a deadline of 3pm Wednesday, 4,180 people had chosen to swap their NFT for a physical artwork, with 5,820 opting to keep their NFTs, according to Heni, a technology company focusing on the art market.

The alternative version is to be destroyed, with the physical artworks – oil on paper – going up in flames on a daily basis from 9 September.

Rafael Alvarez, writing for Bmore Art, writes about a company that salvages old parts of homes in Baltimore:

Near the entrance is a 19th-century cabinet for gun parts salvaged from a once notorious and now defunct shop at 218 South Broadway, the Baltimore Gunsmith.

“It’s primitive in a way that’s charming, looks a bit like an apothecary cabinet,” Riddleberger said of the wooden piece, painted black, with rows of handmade sheet metal drawers. “It’s handmade, it’s local, and it’s associated with a nefarious shop.”

The object might strike some as a card catalog, if Dracula had been a librarian. Each drawer has a faded tag saying what was stored there, including a few with the name “Enfield” for parts, taps and dies made by the historic Royal Small Arms manufacturer in that borough of London.

Other drawers—“people seem to like cabinets with small drawers,” said Riddleberger—are marked “Springfield ‘03” (for a bolt-action rifle used in World War I), “Browning,” and “Krag 30-40,” the last one the name of the rifle carried by US soldiers in the Spanish-American War.

Haaretz publishes an editorial explaining how archeology in the Occupied Palestinian Territories is being used as a tool of occupation:

Archaeology has become a tool to push Palestinians off land and establish the narrative about the Jewish right to the land. But most researchers at Israeli universities have been leery of dealing directly with excavations in the territories, as such digs are still considered by most of the academic world to be illegal activity in occupied territory.

A researcher seeking to publish an article in an international journal, or to receive funding from a non-Israeli entity for a project in the West Bank, would almost certainly be turned down.

The president of the American Historical Association, James H. Sweet, waded into the identity politics debate and churned out this odd article that blames presentism (geez, how academics love to hurl this around at anything they disagree with) and then goes after popular responses to the 1619 Project? It’s a little strange but because of his position it is worth noting:

The Elmina tour guide claimed that “Ghanaians” sent their “servants” into chattel slavery unknowingly. The guide made no reference to warfare or Indigenous slavery, histories that interrupt assumptions of ancestral connection between modern-day Ghanaians and visitors from the diaspora.

Hollywood need not adhere to historians’ methods any more than journalists or tour guides, but bad history yields bad politics. The erasure of slave-trading African empires in the name of political unity is uncomfortably like right-wing conservative attempts to erase slavery from school curricula in the United States, also in the name of unity. These interpretations are two sides of the same coin.

If history is only those stories from the past that confirm current political positions, all manner of political hacks can claim historical expertise.

The 19th looks into the much-repeated claim that Black trans women have a life expectancy of 35, which they prove is not based on any data and was taken from a report that had no citation or facts for their claim:

There was only one problem with the campaign: While that statistic felt true — and transgender women of color are more likely to be murdered than their cisgender female peers, experts say — it’s false.

Experts worry that this statistic gives trans people, especially Black trans people, an expiration date on their lives and creates a self-fulfilling prophecy.

“What you are doing is creating huge levels of fear, which causes high levels of stress, which will actually cause people to die younger,” said Laurel Westbrook, a professor of sociology and the author of “Unlivable Lives: Violence and Identity in Transgender Activism.”

Ever wonder why there’s no Dijon (as in the place) in Dijon mustard? Writing for BBC, Emily Monaco has the story:

That the condiment is so anchored in France’s Burgundy region – of which Dijon is the capital city – is thanks to the historical co-planting of brown mustard seeds with the region’s renowned grapevines, a practice introduced by the Ancient Romans to provide the vines with essential nutrients like phosphorous.

Monks continued to cultivate mustard in this fashion for centuries, and, in 1752, the link between Dijon and mustard was cemented thanks to Dijon local Jean Naigeon, who married the seeds, not with vinegar, but with verjuice – the juice of unripe wine grapes historically used to add a pleasantly sour flavour to recipes in regions inhospitable to citrus.

Dijon mustard stands out from other mustards on the market for its subtle, balanced flavour. Packing more heat than American yellow mustard but less than powerful Chinese mustard or Bavarian senf, it capitalises on the pungency of the mustard seed by marrying it with the pleasant acidity of local Burgundian verjuice or, in most contemporary iterations, white wine.

But the truth is that despite its historical link the to the region, Dijon mustard has been delocalised for quite some time.

A new USA Today report outlines how since 2006 there have been 504 mass killings in the US and 2,644 people have lost their lives. The graphics alone are worth a look:

The horror and tragedy of mass shootings in American schools, churches and other public places capture the nation’s attention. But these are only part of the larger violence of mass killings – deaths by guns, knives, fires, vehicles and other weapons in public and in private – that plague the U.S., research shows.