Beauty remains an uncomfortable territory for many contemporary artists, which makes the boldness of Sarah Ann Weber’s aesthetics all the more compelling. 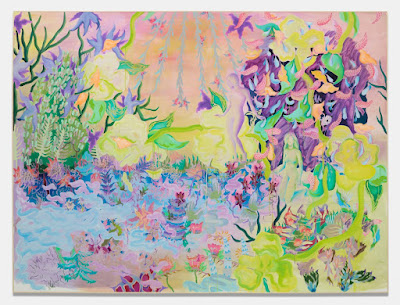 LOS ANGELES — I was recently on the East Coast for the first time in years, and I was stunned by the emerald landscape. Everywhere I looked, verdant trees towered, the likes of which simply do not exist where I live in Southern California. What Los Angeles has is the exoticism of desert plants, which defy imagination with their varied hues and surprising adaptations. Strong Blossoming Thing Forever, Sarah Ann Weber’s current exhibition at Anat Ebgi in Culver City, is a profusion of flora that evokes a coral reef on land, conjured in a color palette rich and tender, never blasting out its notes. The show includes works in paint and colored pencil, on either panel or paper. Female figures appear among the vegetation, featureless nudes whose empty forms are either blank or filled with leaves, vines, and flowers.

Weber’s floral landscape work emerged for the first time in 2017, at the now-closed Club Pro. At the time I was arrested by the energy in her packed, jungle-like overgrowths, more phantasmagoric than real. While you will not find any of Weber’s flowers in a field guide, she tells me they are inspired by frequent hikes around Los Angeles. Growing up in Chicago, she developed a love for the landscape by visiting the Fullersburg Woods with her family, where they would ride bicycles or hike in the summer and cross-country ski in the winter. The turning point was a trip to France that Weber took in 2016, where she did a lot of plein air sketching in parks. After returning to California, she brought those drawings to the studio and worked them over in color pencil, arriving at the visual language she continues to explore today.

Weber deftly uses her hallucinatory plant forms to orchestrate scintillating color relationships. In “A dreamful ease” (all works 2021), radiating gray vines descend from the central top border, shifting to a subtle blue at their edges, glowing against the sunset hues of the oil paint wash underneath. On the right side of this composition, a large bush formed by purple brushstrokes is festooned with lemon-yellow flowers, green leaves, pale blue water droplets, and pink and red dotted flower or leaf shapes. She fills her pictures with these fantasies, building up a rambunctious and captivating landscape.

Weber’s art has a confectionary quality, which turns out to have a delightful backstory. Her parents own a bakery in Chicago, a family business started by her grandfather in 1930 (her parents met at the bakery, in fact). Weber’s earliest aesthetic experiences are rooted in cake decorating, with its bright palette, rainbow spray, and sugar flowers. The first time I visited her studio, some five years ago, she was making work in fondant on glass, a literal response to her youth at the bakery. “Petals from blown roses” showcases her penchant for abundant profusions of flowers, in this case divided roughly into quadrants by hue: red and pink in the upper right, light and dark purples in the upper left, a range of blues in the bottom left, and greens dominating the bottom right. 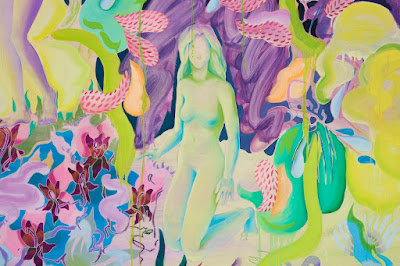 Given her liberal use of pastels and floral imagery, it’s possible to imagine Weber’s work being dismissed as saccharine, but I suspect that what such a critique really means is too feminine, in the stereotypical sense of femininity: delicate and beautiful. Back in 1993, critic Dave Hickey wrote The Invisible Dragon, a series of essays attacking what he identified as a reigning taboo against beauty in the late 20th century. Hickey needn’t have worried. Nearly three decades later, visual pleasure has not been choked off by the theoretical focus of conceptualism, nor by the postmodern dematerialization of the object. Nevertheless, beauty remains an uncomfortable territory for many contemporary artists, which makes the boldness of Weber’s aesthetics all the more compelling.

While the beauty taboo Hickey railed against is surely linked to America’s puritanical inclinations, it may really have been just another attempt to shut women out of fine art. In his 2017 book The Wild Children of William Blake, art critic John Yau (an editor of Hyperallergic Weekend) observed that the death of painting was conveniently declared in the 1980s, just as women were increasingly making themselves known as painters. Women were leaders in the contemporaneous Pattern and Decoration movement, which embraced beauty, using floral imagery to make a point about claiming for art all things considered feminine.

The DNA of Pattern and Decoration is evident in Weber’s paintings and drawings, as is her interest in tapestry, another category historically associated with women. “Return no more” shows the influence of tapestry in her work, its shallow space receding as the eye ascends from the bottom to the top.

The feminist underpinnings of Weber’s work go further. Female figures alone populate these oneiric gardens, and their poses are not naturalistic but rigidly classical. Weber explained to me that she sources her figures (and sometimes her compositions) from canonical paintings such as Botticelli’s “Birth of Venus,” as well as art nouveau fairy tale illustration. The figures embody such cliches as the damsel in distress and the succubus, stereotypes that Weber says she’s had to deal with throughout her life and now seeks to reclaim. Through her paintings and drawings, she wrestles with the twin inheritances of art history and sexism.

To my eye, the figures are stiffly rendered and look pasted in, injecting an awkward note of frozen rationality into an otherwise unadulterated flow of psychic wilderness. Yet Weber has put them there for a reason, hinted at by the titles of the works, all mashups of lines from 19th-century poet Alfred Tennyson’s “The Lotos-Eaters” (1832). Tennyson’s poem retells a passage from Homer’s Odyssey, in which sailors are trapped on an island by its magical flowers and fruit; they become passive and helpless in a deadly paradise. Weber’s Edenic worlds are fatal to men just as the pitcher plant kills through seduction: her paintings assert the strength and power in conventional notions of femininity.

In most of the works, the female figures appear on the shore of a pond, lake, or stream. Looking at them I imagine myself as Actaeon stumbling upon the graceful Artemis bathing among her attendants. I will be turned into a stag, prey to my own hounds.