The new opera, which anchored the Aix-en-Provence Festival, is a monumental cry against gun violence.

Kaija Saariaho’s opera “Innocence,” which had its première at the Aix-en-Provence Festival on July 3rd, contains one of the most unnerving scenes I’ve witnessed at a theatre. About forty minutes into the piece, in a scene marked “IT,” the chorus chants the phrase “When it happened” in staggered rhythm, with low piano and double-basses punching up each syllable. A frame drum raps out sixteenth notes in rapid-fire bursts, and two trumpets let loose a series of “rips”—quick, shrieking upward glissandos. Then the orchestral mayhem cuts off abruptly; sopranos oscillate queasily between the notes A-flat and G; and the brutal rhythm resumes in the percussion. The terror is made explicit onstage, as a high-school student stumbles through a door, his arms covered in blood. A shooter, a fellow-student, is laying siege to a Finnish international school. Opera, which has been making art from death for more than four centuries, is recording a new kind of horror. 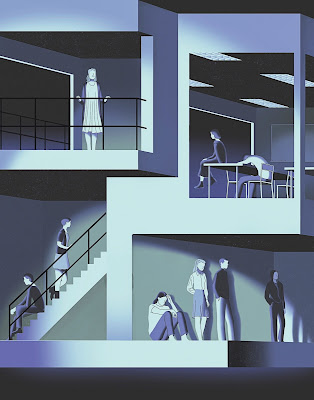 The shock of the moment is redoubled by the fact that the audience is only just discovering what the opera is really about. At the beginning, a strangely cheerless wedding reception is in progress, at a restaurant in Finland. The groom’s brother was involved in an unnamed tragedy ten years in the past; the bride, an immigrant from Romania, knows nothing of that history. A waitress is sickened upon learning which family has hired her for a wedding: her daughter died in the tragedy in question. Evasive locutions of politeness and shame conceal the specifics of what happened until performers begin enacting the memories of the survivors.

The libretto is by the Finnish-Estonian novelist Sofi Oksanen, who knows how to play on our expectations and then short-circuit them. The title is ironic: the characters refuse to arrange themselves into a simplistic array of heroes and villains. The killer is never heard from, though there are glimpses of him as a bullied kid. The aftermath is chaotic: media sensationalism and political doublespeak have done their work. The groom confesses that he rejoices at the news of new shootings, because they confirm that “monsters are bred in other families, too.” A teacher subjects her students’ papers to paranoid analysis, searching for signs of mental instability: “I reported any weird syntax in their essays, any change in their handwriting, until I understood I wasn’t fit for teaching anymore.”

The psychological-thriller components of “Innocence” mark a change for Saariaho, who rose to fame by employing modernist and avant-garde techniques to summon otherworldly, dreamlike spheres. Her best-known score is the opera “L’Amour de Loin,” which premièred in Salzburg in 2000 and arrived at the Met in 2016; it gorgeously evokes the rarefied longings of the twelfth-century troubadour Jaufré Rudel. Saariaho’s second opera, “Adriana Mater” (2006), made a turn toward contemporary reality, telling of a woman raped in time of war, but its approach was more meditative and abstract. “Innocence,” which Saariaho completed in 2018, has a seething rawness. It’s as if the turmoil of recent years had prompted her to abandon aesthetic distance and enter the melee of the real.

Saariaho has said in an interview that she modelled “Innocence” on two great Expressionist shockers of the early twentieth century, “Elektra” and “Wozzeck.” Like those operas, “Innocence” lasts less than two hours, its five acts and twenty-five scenes unfolding without interruption. The orchestral prologue introduces familiar elements of Saariaho’s sound world: solo woodwind and brass lines that twirl about or trill in place; eerie clockwork ostinatos on celesta and harp; grandly groaning textures for full ensemble. Sharper-edged, more propulsive patterns soon break in, but they seldom establish a steady forward motion. The atmosphere is at once sensual and unsettled—dread in vivid colors.

Generational and demographic divides in the opera’s community are evident in a controlled squabble of vocal styles. The members of the wedding party—labelled Bride, Groom, Mother-in-Law, Father-in-Law, Priest, and Waitress—are conventional singing parts. Five survivors of the shooting are portrayed by actors or singing actors, who speak, variously, in Swedish, French, Spanish, German, and Greek. An English teacher chants her lines in Sprechstimme—the half-spoken, half-sung manner associated with Schoenberg’s vocal works. Markéta, the shooting victim mourned by her waitress mother, makes ghostly visitations, her folkish, singsong melodies slicing through the prevailing density of Saariaho’s harmonic textures.

The début production in Aix, directed by Simon Stone, was hypernaturalist in style, pitting the ordinary against the unthinkable. The set designer Chloe Lamford, in collaboration with the lighting designer James Farncombe, assembled a handsomely drab array of dining rooms, kitchens, classrooms, bathrooms, and stairwells. The year could have been any since 1950, but Mel Page’s costumes narrowed the time frame to the early two-thousands. The entire set rested on a turntable in constant motion; in the later stages of the opera, as trauma resurfaced, the school spaces replaced the wedding venue, with splashes of blood appearing on smudged white walls. (Nimble stagehands pulled off rapid set changes.) The cinematic fluidity of the spectacle proved just as effective on a video stream, which I watched a week after the première.

At the head of the cast was the Czech mezzo-soprano Magdalena Kožená, who embodied the part of the Waitress with unremitting expressive force. Sandrine Piau and Lilian Farahani gave nuanced portraits of the Mother-in-Law and the Bride; Tuomas Pursio and Markus Nykänen occasionally struggled with the acting demands of, respectively, the Father-in-Law and the Groom. Lucy Shelton was wrenching as the Teacher, who conveys the opera’s battered moral core. Among the actor-singers, Vilma Jää exuded an almost demonic purity as Markéta, and Julie Hega made a mesmerizing, husky-voiced enigma of the student Iris, who unexpectedly dominates the final scenes. Susanna Mälkki, conducting the London Symphony and the Estonian Philharmonic Chamber Choir, brought to bear her customary precision and authority.

“Innocence” will travel widely: both the Met and the San Francisco Opera are set to present the work in future seasons. I wonder how American audiences will cope with its unsparing approach to a subject that, for several decades, has been locked in accelerating cycles of national insanity. No false tone of healing or hope is sounded at the end; instead, the circles of complicity keep widening. What rescues the opera from utter bleakness is the inherent beauty of Saariaho’s writing. In the concluding bars, a darkly glowing harmony emerges, somewhere in the vicinity of B major, though a dissonant C in the double-basses prevents full resolution. Ominously or not, it is the same note on which the opera begins.

An easing of pandemic restrictions allowed Aix to muster a full schedule this summer, with eight operatic productions. Aside from “Innocence,” the most elaborate offering was “Tristan und Isolde,” with Simon Rattle conducting the London Symphony. Stone was again the director, and, as is his habit, he brought with him marvellously detailed realist sets: the first act takes place in a deluxe high-rise Paris apartment, the second in an architect’s office, the third in the Métro. The concept is, however, a tired one: Isolde as an haute-bourgeoise who escapes an unhappy marriage by daydreaming about her life in mythic terms. For the most part, the conceit fails to cohere with Wagner’s drama, though the subway sequences attain a surreal poetry. The leads, Nina Stemme and Stuart Skelton, were the same as when Rattle conducted “Tristan” at the Met, in 2016. On the second night of the run, Stemme fell short of her usual standard, but Skelton was in total command, singing with superhuman intensity through the tenor slaughterhouse of Act III.

On another night, I took a bus to Arles for the première of Samir Odeh-Tamimi’s music-theatre piece “L’Apocalypse Arabe,” based on a poetic cycle by the Lebanese American author and artist Etel Adnan. The performance took place in the Grande Halle of the Luma Arles arts complex, in the asymmetrical shadow of Frank Gehry’s newly inaugurated Luma tower. Adnan’s text conjures up the long nightmare of the Lebanese Civil War; Odeh-Tamimi, an Israeli-Palestinian composer who has long resided in Germany, responds with a molten score, mixing jagged instrumental textures with rumbling electronica. The poems are variously sung and recited by a five-member female chorus and by a male observer known as the Witness. The staging, by Pierre Audi, Aix’s general director, dwelled on tableaux of figures silhouetted against a desert sun. After an arresting start, the work failed to take flight as drama, its imagery oblique and repetitive. Still, the baritone Thomas Oliemans thrashed about compellingly in the lead role, and Ilan Volkov elicited potent playing from the Ensemble Modern.

A few hours before seeing “Innocence,” I attended a theatricalized Baroque program titled “Combattimento: The Black Swan Theory.” The staging concept, by Silvia Costa, was largely unintelligible, but the music-making was so superb that the random appearance of cribs and mushroom clouds could be safely ignored. The Ensemble Correspondances, under the direction of Sébastien Daucé, led a sumptuous grand tour of seventeenth-century Italian vocalism, placing Monteverdi’s madrigal-cantata “Combattimento di Tancredi e Clorinda” alongside excerpts from operas and oratorios by Francesco Cavalli, Luigi Rossi, and Giacomo Carissimi. Amid a formidable lineup of younger singers, the mezzo-soprano Lucile Richardot stood out for her lustrous rendition of “Alle ruine del mio regno,” Hecuba’s apocalyptic aria from Cavalli’s “Didone.” In the wake of Saariaho’s monumental cry against violence, I thought back to the deposed Queen of Troy and her search for a “way to lament, beyond tears.” That way is music, then as now.