Barbara Bourland's gripping new novel "Fake Like Me" unfolds at the pace of a thriller but is steeped in contemporary art theory. 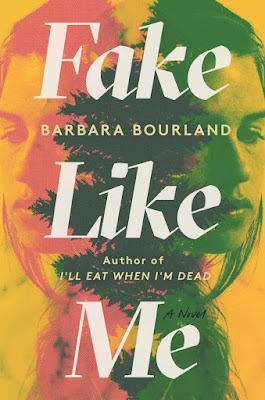 Cover of Fake Like Me by Barbara Bourland (Grand Central Publishing, June 2019)

Feminist art isn’t quite the preoccupation of Barbara Bourland’s gripping new novel Fake Like Me, but feminism in the art world sure is, and the book’s whip-smart narrator , a thirty-something painter (who remains nameless throughout), has a lot to say on the matter. “I hate that we’re supposed to have these matrilineal bonds of motherhood and sisterhood,” she laments to an art-collector friend. “Like everything for women is about this kind of physical connection. But — men get to be themselves.”

The novel’s feminist themes grow more pronounced as the story slowly reveals itself to be a twist on the classic “dead girl” thriller, a genre that the critic Alice Bolin once described as intensely focused on dead women’s bodies but which in truth is “always and only about men” and their fantasies. Bourland (I’ll Eat When I’m Dead) gives us instead a female-driven exploration of a young woman’s death. The deceased woman in question is Carey Logan, one of a five-person art collective called “Pine City,” and the painter narrator’s idol. Like Logan, the painter grew up poor and far away from the hip downtown art scene of New York City. Both artists eked their way into the same art school, Logan a few years ahead of the protagonist; both worked feverishly for their successes. When Logan dies, it devastates the painter and sends a ripple of giddy greed through the art world. Rumor has it that Logan, who moved from sculpture to performance art in the last couple years of her life, left behind a performance piece that had yet to be shown to the public. Questions of who owns the rights to the piece and whether it should be shown circulate among artists and collectors, spurring law suits and upping the value of her artwork.

The novel unfolds at the pace of a thriller but is steeped in contemporary art theory. Bourland describes herself as “an amateur artist” but a “professional-grade enthusiast,” and her dedication to the subject is clear on every page: The book brims with allusions to Lucy Dodd, Laura Owens, and Marina Abramovich. A passage on the sharp-edged beauty of the dagger brush seems inspired from an interview with Jack Whitten that’s included in Jack Whitten: Five Decades of Painting.

Impressively, Bourland’s eruditeness rarely weighs down her prose, which zips across the page like a steady painter’s hand across a canvas. The characters’ crackling dialogue is also a pleasure to read, especially when they’re discussing art: “Does your work have a political purpose,” asks a colleague at a party. The painter replies: “[My paintings] are objects that exist unto themselves, moving and beautiful, worthy of the space they take up in the world, political because they do not  crouch in a corner, because their labor is obvious. Their weight is obvious. Their heft cannot be ignored or dismissed. They are the only part of me that is big.”

It’s responses like this that reveal the richness of the painter’s inner life. Her self-worth is in turns shaped and deconstructed by a healthy appreciation of her immense talent one moment and shattering bouts of imposter syndrome the next. She feels like a charlatan whenever a person or situation reminds her of her humble origins. In these moments, the novel takes on themes of class consciousness; no matter how successful the painter becomes, she still feels her working-class Floridian roots nipping at her paint-bespattered heels.

The novel’s title, Fake Like Me, arises from several different kinds of pretending. Seven of the painter’s enormous watercolor paintings are lost in an apartment fire mere months before her gallery opening, so she seeks to clandestinely repaint them in a secluded art studio at a retreat run by Pine City — a decision that could get her charged with fraud. While at the retreat she learns the truth about Carey Logan’s death and the title takes on new meaning, one charged with all the book’s larger themes of feminism, class, and the greediness of the art world. Glittering with wit and mystery, Fake Like Me is more than an immensely readable portrait of an artist — it shatters expectations with pointed satire and structural daring.