WITH J.M.W. TURNER, THE TATE

A show at Tate Britain underscores Turner as the great recorder of elemental disorder and industrial pollution on the grand scale.

LONDON — Sometimes you can have too much of a good thing. Take the case of J.M.W. Turner, that son of a barber who is widely regarded as England’s greatest painter.

A new show, Turner’s Modern World, has just opened at Tate Britain on the subject of Turner and modernity. What exactly does that mean? Two things. It examines how Turner responded to his own modernity, which means the times in which he lived, from the dawn of the noisy, dirty, puffabilly locomotive to the triumph, decline, and fall of a brilliant, obstinate gobbet of short Corsican self-puffery called Napoleon Bonaparte. It also addresses, in its final two rooms, to what extent Turner can be regarded as a “modern” — an artist who was ahead of his times.

Tate Britain is the right place to stage such a show, of course. In fact, you could call it Turner’s spiritual home because it is here that he has his own gallery and research center. If you are a raging Turnerite, you might want to pitch a tent in Tate Britain’s modest garden

Why, then, is a Turner show at Tate too much of a good thing? One problem is the sheer quantities of Turners available to be looked at. John Ruskin, the most eminent of Victorian art critics, knew all about this problem. In fact, it almost killed him. Ruskin was Turner’s greatest advocate and, as a reward for his pains, he was appointed to be the man in charge of looking after the Turner Bequest to the UK, which meant every scrap that Turner had left to the nation. It took him seven years.

This means, of course, that any team of dedicated Turner specialists could mount umpteen exhibitions on a multiplicity of themes. How marvelous! In fact, don’t you feel a bit sorry for those curators who spend their lives eating their hearts out over Vermeer, whose surviving works amount to 33?

The problem with having roughly 30,000 works to choose from is that not all will be masterpieces. Nevertheless, they will be pressed into service when the latest grand theme emerges, if need be.

This is exactly what has happened here. A talented, knowledgable, and eager-beaver team of Turner aficionados have proposed a huge theme — nothing less than how Turner himself, that tirelessly hardworking, long-lived, perpetually curious, and skilled artist, responded to more than half a century of change in England (and, by extension, Europe, too, because he was a nosy traveler) — its social upheavals, its politics, and its rapid development as an industrialized nation.

What an idea! Alas, it is an idea that is brilliant in conception but hobbled by its painstaking execution. What it does not lack is adequate documentation of its themes, in the form of paintings, sketches, drawings, and prints, which range from impressive to uninspired and workaday, if not boring. How could there not be some duds? No man, woman, or ape is a genius on every day of the year.

In fact, the exhibition only really blazes into life in Gallery Seven (of eight), where the question of the modernity of Turner himself is addressed in spectacular fashion. Here, at last, is the Turner we all thrill to and love to look at, the great recorder of elemental disorder and industrial pollution on the grand scale.

Here is the man who declared that he had himself strapped to the mast of a steamboat to feel the scourging of the elements on his very own skin and lived to tell the tale, who sent gouts of black smoke spiraling up into the air when he painted the pride of the Great Western Railway careering over the Maidenhead Viaduct in 1844, with its passengers in open-air carriages tugged along behind, experiencing the thrill or fright of a lifetime. Or the man who became the master of indefinition, in views so hazily rendered that they barely seem to be present at all … 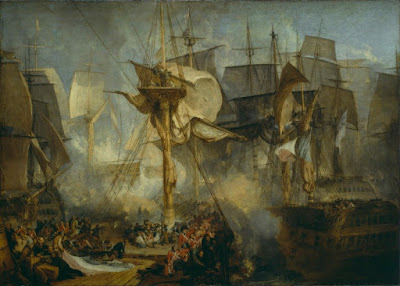 And then there is the lesser Turner, the admirably dogged chronicler of new canals and civic buildings, of dramatically novel juxtapositions of the natural and the industrial (a forge by moonlight, for example, when the manmade threatens to out-blaze nature herself), the man who repeatedly sought out royal commissions and never quite succeeded in getting them.

Just look at the giant “England: Richmond Hill, on the Prince Regent’s Birthday” (1819) — at nearly 11 by 6 feet, the biggest painting Turner had ever done. This quasi-pastoral fabrication captures the moony faces of the fashionable in Richmond Park with wincing ineptitude. The women are especially clumsy. Turner could seldom render people convincingly. Unsurprisingly, the Regent didn’t leap at the chance of owning the work. The painting stayed in Turner’s studio until his death.

And then there is the interesting tale of how he went after famous battle scenes. Why not? He was a jobbing painter who was trying to earn a living. He visited Nelson’s Victory when it was back in dry dock, and worked up a not-half-bad painting on the Battle of Trafalgar and the fall of Vice-Admiral Lord Nelson, commander of the British fleet.

Turner’s Modern World offers indubitable proof that Turner was painting his own times. To present this is interesting enough (especially to those squatting outside in that tent who are mad about all things Turner, and therefore want nothing less than a comprehensive overview of the man and all his works). Yet the show also easily lapses into dullness and even box-ticking — yes, he does civic disorder, the extension of the vote, etc., etc. ….

Has anything been left out? Any documents yet unplumbed? Wrench the lids off those rusting tins again, Ruskin!