EXHIBITION IN LONDON: JEWISH RESISTANCE TO THE HOLOCAUST 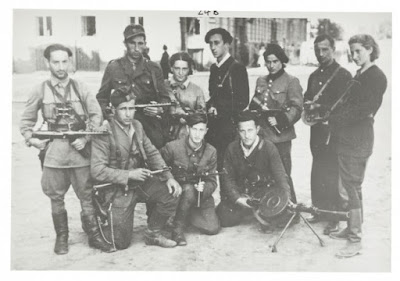 During the Holocaust, Jewish partisan groups and underground resistance networks launched attacks, sabotage operations and rescue missions. Resistance groups in ghettos organised social, religious, cultural and educational activities and armed uprisings in defiance of their oppressors. In death camps, in the most extreme circumstances, resisters gathered evidence of Nazi atrocities and even mounted armed rebellions.

The Wiener Holocaust Library’s new exhibition draws upon the Library’s unique archival collections to tell the story of the Jewish men and women who, as the Holocaust unfolded around them and at great risk to themselves, resisted the Nazis and their collaborators.

In this exhibition, The Wiener Holocaust Library reveals stories of incredible endurance and bravery, including that of Tosia Altman in German-occupied Poland, who moved in and out of ghettos distributing information and organising armed revolt; the Jewish slave workers at Auschwitz who worked secretly to smuggle evidence out of the death camp, and the Bielski brothers in the forests of Belorussia whose partisan groups rescued 1200 men, women and children.

The exhibition also explores individual acts of resistance: the maintenance of secret diaries by Ruth Wiener in a concentration camp and Anne Frank in hiding in Amsterdam; the clandestine religious worship practiced in ghettos, and the testimonies buried in Auschwitz by victims of Nazi persecution.

During the Holocaust Jews resisted whenever they had the opportunity, in dangerous and even impossible circumstances.

The Wiener Holocaust Library's Senior Curator and Head of Education, Dr Barbara Warnock, shares an exclusive insight into the exhibition in this short video.

Due to COVID-19, we will initially be opening the exhibition only to those who have pre-booked a viewing slot in advance to limit visitor numbers in line with our new health and safety measures. Visit our Eventbrite page for further booking details here. Please note that the Library is currently only open Tuesdays, Wednesdays and Thursdays, 11am-3pm.

The exhibition run will include a series of events designed to amplify themes in the exhibition.

From the Ghetto Underground to a Partisan Warfare: Jewish Resistance in The Second World War. Daniela Ozacky Stern. 17 September 2020.

A Virtual Talk: The Resistance in Colour: Resisters from the colonies in France, 1940-44. Dr Ludivine Broch. 8 December 2020.

We have been delighted to receive the following press coverage for this exhibition:

Smithsonian Magazine The Untold Story of Jewish Resistance During the Holocaust (06.08.20)

The Jewish Chronicle Pictures of resistance (07.08.20)

Museum Crush The Wiener Library on Jewish resistance to the Holocaust (11.09.20)

Tablet Magazine Recognizing Jewish Rescuers of Jews During the Holocaust (09.10.20)