Tens of thousands of paintings of animals and humans, made up to 12,600 years ago, were found along the Guayabero River in the Colombian Amazon.

In a remarkable discovery, archaeologists have found one of the world’s largest collections of prehistoric rock art in the Amazonian rainforest.

Tens of thousands of paintings of animals and humans, made up to 12,600 years ago, were found on an eight-mile rock surface along the Guayabero River in the Colombian Amazon.

The discovery belongs to a joint team of Colombian-British researchers, led by Jose Iriarte, a professor of archaeology at Exeter University in the United Kingdom. The archeologists conducted the main bulk of excavations in the area between 2017-2018 with the intent of revealing their findings in the documentary series Jungle Mystery: Lost Kingdoms of the Amazon, which will air on the British Channel 4 starting December 5. The documentary’s presenter is Ella Al-Shamahi, an archaeologist and explorer. The findings are also outlined in an article in the journal Quaternary International.

In an email to Hyperallergic, the researchers wrote: “The excavations, in the deep soil around the shelters, have revealed one of the earliest secure dates for the occupation of the Colombian Amazon and clues about people’s diet at this time, as well as the remains of small tools and scraped ochre used to extract pigments to make the paintings.”

“These native animals all became extinct, probably because of a combination of climate change, the loss of their habitat and hunting by humans,” the researchers wrote.

According to the researchers, communities that lived in the area at the time of the drawings were hunter-gatherers who fished in the nearby river. Remains of bones and plants found during the excavations shed information about their diets, which included palm and tree fruits, piranha, alligators, snakes, frogs, rodents such as paca, capybara, and armadillos.

“The paintings, on specially prepared rock walls of the Serranía La Lindosa, on the northern edge of the Colombian Amazon, is further evidence of the impact early human communities had on the Amazon’s biodiversity and their adaption to climate change,” the archaeologists wrote. “At the time the drawings were made temperatures were rising, starting the transformation of the area from a mosaic landscape of patchy savannahs, thorny scrub, gallery forests and tropical forest with montane elements into the broadleaf tropical Amazon forest of today.” 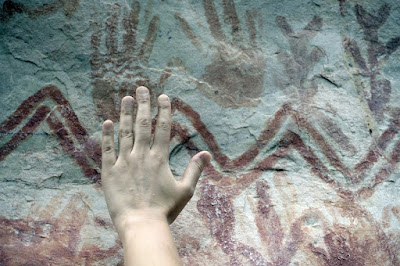 A bitter civil war that continued in Colombia for five decades had prevented access to the region, which was under the control of the anti-government Revolutionary Armed Forces of Colombia (FARC) guerrillas. It wasn’t until 2016, when the FARC and the Colombian government signed a peace agreement, that researchers could access the cave paintings.

“These rock paintings are spectacular evidence of how humans reconstructed the land, and how they hunted, farmed and fished,” said Iriarte. “It is likely [that] art was a powerful part of culture and a way for people to connect socially. The pictures show how people would have lived amongst giant, now extinct, animals, which they hunted.”

Robinson added that the cave art was produced by the earliest people to live in western Amazonia.

“The paintings give a vivid and exciting glimpse into the lives of these communities,” the researcher said. “It is unbelievable to us today to think they lived among, and hunted, giant herbivores, some which were the size of a small car.”