Steven Chilton Architects has designed a theatre in Guangzhou, China, which has a shape informed by the city's historical connection to silk and is imprinted with patterns that represent its current tattoo culture. 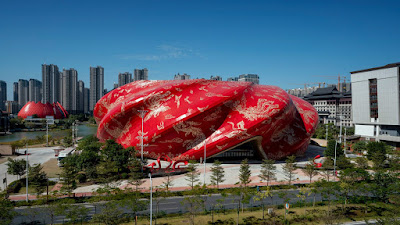 Named the Sunac Guangzhou Grand Theatre, the building will host performances from visiting production companies as part of a group of entertainment venues being built in the city's Huadu District.

The building's distinctive cladding was informed by Guangzhou's history as a key trading port.

"Guangzhou is the birthplace of the Silk Road on the Sea, it has been the home of and inspiration for artists who have helped to define the world's concept of Chinese culture for thousands of years," said Steven Chilton Architects founder Steven Chilton.

"Aside from its functional purpose, our intention with the design has been to channel the history, emotion, and creative energy of the city through a building whose mission is to nurture the next generation of cultural leaders in the performing arts," he told Dezeen.

The theatre is wrapped in undulating red cladding made from triangular panels, which was designed to recall the folds in flowing silk.

"We have drawn inspiration from traditional and contemporary arts commonly practised in the region. Silk cloth has been made, painted, and embroidered in the city since the Han Dynasty," explained Chilton.

"We drew from the physicality of the material in our approach to the form through a series of gently twisting folds that define the outer envelope."

Across this red cladding, a series of darker patterns informed by tattoo art were drawn. Above this base layer, a series of golden figurative animals that were influenced by a local myth titled 100 Birds Paying Homage to the Phoenix, were added to the facade. 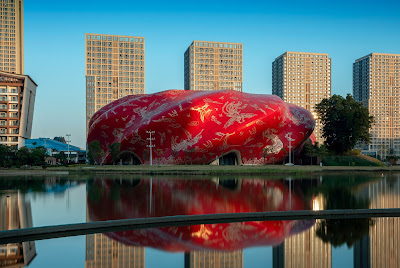 Phoenix characters were given positions of prominence, while birds were arranged over the facade dependent on the geometry.

"Tattoo culture has recently gained prominence as a respected artistic medium, driven by a younger generation embracing it as an expression of individuality," said Chilton.

"It has inspired a renewed interest in traditional Chinese culture, where symbols and myths often fetishized in popular western culture are being repatriated and worn as a contemporary expression of kinship with the national identity as expressed in the visual arts."

A circular auditorium was placed at the centre of the building with all the supporting facilities, including rehearsal areas and offices, wrapped around it.

As the auditorium was originally designed to host a fully immersive water show, it is surrounded by 360 LED screens, while there are 12 acrobatic hoists and three acrobatic tracks and trolleys above the stage.

The stage itself stands above a nine-metre deep pool and can be raised or lowered into it to allow for water-based performances to take place.

"The auditorium design is based on an immersive concept developed by show creators, Dragone," explained Chilton. "The original brief was to develop the seating and equipment to serve a resident show that would be performed for 10 years or more," he continued.

"Halfway through the project, the client updated the brief to enable the theatre to be used for travelling productions and short-term events," he added.

"Fortunately, the design of the seating and theatre specialist equipment leant themselves to this purpose and the immersive elements were retained, as was the ability to transform the stage for productions that require spectacular water effects."…………….