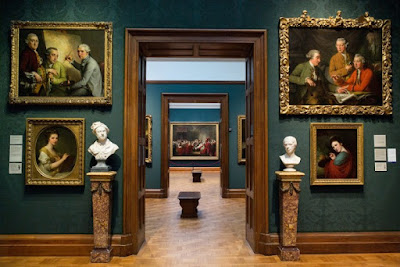 The controversy around oil sponsorship in the arts has taken yet another turn in the United Kingdom. It was announced earlier today that 78 artists have signed onto a letter demanding that the National Portrait Gallery end its relationship with the oil company BP, which has sponsored the museum’s Portrait Award for the last 30 years.

Signatories include former Turner Prize winners like Antony Gormley, Anish Kapoor, and Rachel Whiteread. Together, the artists are asking that the museum not renew its contract with BP when it expires in 2022, start looking for alternative funding streams, and immediately remove a BP representative from the judging panel for the award.

“A crucial role of art is to describe to future generations what it is to be alive now, and to provide an echo of our humanity to those who seek it in the future,” reads the note, which is addressed to the British institution’s director Nicholas Cullinan. “The ethical red lines regarding art sponsorship are always shifting, tracing the curve of corporate behavior and what’s regarded as the public good.”

This is the second such letter written by the artist Gary Hume and published by Culture Unstained, a nonprofit aiming to end fossil fuels sponsorship of the arts.

Hume had juried this year’s BP Portrait Award before going public with his position against the oil company last month. Joined by eight former winners, shortlisted artists and exhibitors for the prize, that initial letter argued that the Gallery’s refusal of a Sackler Trust grant in March demonstrated that the museum is indeed prepared to reject funding when a donor does not share its values.

The National Portrait Gallery responded at the time with a statement saying, in part, that it “respects other people’s rights to express their views.” When reached for comment about the second letter, a museum spokesperson responded to Hyperallergic over email with a statement from the Gallery’s director Nicholas Cullinan:

With government funding accounting for just 33% of our total income, it is essential for the Gallery to work with a wide range of corporate partners to fund our work. Their support enables us to stage activities and exhibitions that we would not be able to do otherwise and to remain free and open to all. BP’s long-term support for the Portrait Award directly encourages the work of talented artists across the world. It also enables free admission to the exhibition, which attracted over 275,000 visitors in London last year. For this we are grateful.

We continually aim to expand our list of corporate supporters and find new funding partners, although attracting new sponsorship is challenging in the current economic conditions.  We have noted the point the letter raises about a BP representative being on the Portrait Award judging panel, which is refreshed each year.

Our commitment is to act in good faith and for the public good. Our challenge is to fulfill our remit, fund our work for the public and find positive solutions appropriate to the changing times in which we live.

The BP Portrait Award has courted controversy in recent years. In 2017, winner Henry Christian-Slane donated £1,000 (~$1,269) of his £7,000 (~$8,883) prize to the anti-BP protests. That same year, Culture Unstained issued a formal call to the Gallery to end its BP sponsorship, saying it violated the museum’s own ethics policies. Just days after Hume’s first letter went public in June, anti-oil activists blocked the National Portrait Gallery’s entrance to protest BP sponsorship.

But anger about oil money in the arts is not specific to the Gallery. Late last month, Mark Rylance — a respected actor, theater director, and playwright — resigned as an associate artist of the Royal Shakespeare Company while admonishing the company’s ongoing ties to BP. In April, Hyperallergic reported about the group Extinction Rebellion’s staged die-ins at institutions like the Tate Modern and London’s Natural History Museum. Culture Unstained has lobbied museums like the Science Museum and British Museum to end oil sponsorship for years. They have also published research mapping influence between the oil company, Russia, and human rights abuses abroad. The group is also part of the Art Not Oil coalition, which includes other activist groups like Liberate Tate and BP or Not BP?

Youan read the full letter below:

We are writing to you to follow up on the letters sent to you by myself Gary Hume and other artists before the announcement of this year’s BP Portrait Award winner. You have said, ‘We are always keen to listen to the debate and understand the issue and opinion around funding for the arts.’ Therefore, in a spirit of constructive engagement, we would like to further the conversation, and encourage you to focus on what we believe to be the fundamental issue here – BP’s role in furthering the climate crisis, and our collective responsibility to act.

BP is one of the world’s biggest producers of oil and gas. Despite its acknowledgement that climate change is a problem, and the prominence of BP’s green credentials in its advertising, the company is choosing to invest 97% of its available capital in fossil fuel exploitation and a mere 3% in renewables. We recognise that a 3% effort towards any goal will achieve next to nothing, and this kind of glaring contradiction between words and actions can only remain in place if people don’t challenge it.

Unfortunately, BP’s continued sponsorship of the Portrait Award is lending credence to the company’s misleading assurance that it’s doing all it can, and so we, as artists, feel we must speak up.

A crucial role of art is to describe to future generations what it is to be alive now, and to provide an echo of our humanity to those who seek it in the future. The ethical red lines regarding art sponsorship are always shifting, tracing the curve of corporate behaviour and what’s regarded as the public good. This was clearly demonstrated when the NPG moved away from its partnership with tobacco company John Player thirty years ago, and the Sackler family earlier this year.

We believe that, today, the loss of BP as a source of funding is a cost worth bearing, until the company changes course and enables future generations to make art in a world that resembles our own.

For the NPG to be seen as a forward-looking institution that’s on the right side of history we therefore urge you to publicly commit to:

– not renew the contract with BP when it expires in 2022

– start looking for alternative funding for the Portrait Award

– as an immediate first step, remove the BP representative from the judging panel.

Please be assured that you will have our strong support in taking these steps, and that we believe the number of artists taking this position will continue to grow

We are looking forward to your response.