GOODBYE 2020! WELCOME HEALTHY 2021! AND THE SILLY, SEXY, AND SERIOUS WIGS THAT MADE HISTORY

"The Wig: A Hairbrained History" explores the wig as a tool for gender bending, seduction, and disguise in a collection of fanciful short essays. 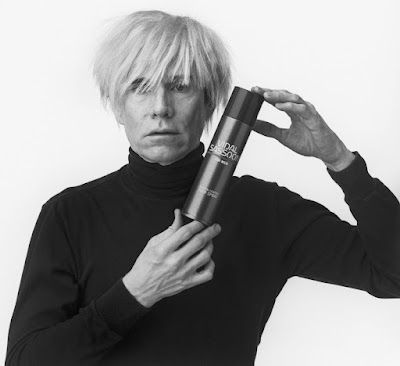 Andy Warhol Holding a Can of Vidal Sassoon Hairspray (photo by A. Unangst Ltd/Corbis via Getty Images)

What’s something that Queen Nefertiti, Andy Warhol, and the tennis star Andre Agassi have in common? They all wore wigs. Far from mere embellishments, these wigs made history: the beautiful Nefertiti wore wigs to mask her baldness; one of Warhol’s iconic silvery wigs sold at a 2006 Christie’s auction for over $10,000; and Agassi blames a loose, leonine wig for his unexpected French Open loss in 1990. Wigs bestow their wearer with beauty, power, and youth. They are tools for gender bending, seduction, and disguise. So why not write a book about them? Originally published in Spanish in 2014, The Wig: A Hairbrained History by the Mexican poet and writer Luigi Amara was just published by Reaktion Books in an English translation by Christina MacSweeny, exploring the wig’s silly, sexy, and serious strains in a collection of fanciful short essays.

An uncommon subject of study, the wig has been “generally disdained as superfluous, and unconditionally expelled from the realm of the thinkable,” Amara notes. His book reads like an extended brainstorm about the topic, examining the wig through the lens of visual arts, popular culture, and film. Amara unearths some fascinating, forgotten material, like the overconfident Versailles master wigmaker André Charles, who proudly sent one of his amateur dramas to Voltaire only to receive the reply, “Master André, make wigs, always wigs, nothing but wigs,” written a thousand times over four pages. And we learn about the painter Oskar Kokoschka’s handmade, lifesize fetish doll made of feathers and an auburn wig — his replacement for a wayward lover. The range of subjects in Amara’s book is expansive, eclectic, and inventive. In one chapter, he reflects on the otherworldly, erotic charge behind the wigs of futuristic 1960s space movies and TV series like Barbarella and UFO. In another, he ruminates on hair as an ancient symbol of fertility via the towering, outlandish wigs that preceded the French Revolution, which Amara writes “could be said to prefigure dioramas and the concept of the World Fair.”

But as Amara’s title indicates, the element of history in his book is tangled. Although fascinating historical characters and events loosely structure his chapters, for Amara, history serves as a secondary scaffolding to attach his thoughts and musings to. The essays don’t follow a chronological or thematic order and, at times, the author’s curious jumps between topics border on distractingly nonsensical.

It’s obvious that Amara isn’t aiming at orthodoxy: his short works cited list is cheekily titled “Bedside Reading.” However, a more cogent sense of wig history — dates, timelines, materials, and techniques — would make for more engaging reading. Part of the issue also stems from Amara’s idiosyncratic writing style. Depending on the reader’s disposition, his prose comes off as whimsical, tiresome, or both. (MacSweeny does a commendable job with Amara’s loopy language, preserving puns and alliterations, like Warhol’s “filamentary finery,” that pepper the text.)

It’s clear that for Amara, the wig is an excuse to ponder, wander, and lose himself to flights of fancy. But he’s often close to losing the reader, too.