AND FROM THE BAMBINO TO JOLTIN’ JOE: BASEBALL MEMORABILIA THAT KNOCKS IT OUT OF THE PARK

The stories behind an outstanding collection of baseball memorabilia offered in New York, from Babe Ruth’s bat to a Lou Gehrig Yankees jersey, plus balls, cards, pennants, photographs — and a love letter from Marilyn Monroe to Joe DiMaggio

The New York Yankee first baseman Lou Gehrig broke countless records across his career — and in 1999 even gained more votes than his old team-mate, Babe Ruth, when fans and experts compiled the Major League Baseball All-Century Team. Perhaps the most famous of his records was that of playing 2,130 consecutive games between 1925 and 1939 (a streak that stood unsurpassed for more than 50 years).

Gehrig wore this jersey — with the Yankees’ iconic blue pinstripes — during the 1931 season, by which time it’s widely agreed he’d emerged from Ruth’s shadow to become the finest player in all baseball. During 1931’s campaign, he led the American League in four major categories: runs (163), hits (211), home runs (46) and RBIs (185).

Ruth and Gehrig in perfect harmony

For the decade between Lou Gehrig’s breakthrough in 1925 and Babe Ruth’s departure from the club in 1934, the duo helped make the New York Yankees serial winners. The two great sluggers had very different personalities: Ruth flamboyant and outgoing, Gehrig reserved and highly disciplined. ‘As complementary as ham and eggs’ is how one journalist described them. Initially very good friends, the pair would fall out in the 1930s — only to resurrect their friendship before Gehrig’s death, aged just 37, in 1941.

This picture harks back to happy times. Sitting beside the batting cage at a game against the Cleveland Indians in 1927, Ruth and Gehrig share an obvious rapport. The photograph is signed by both in fountain pen.

Signed by a baseball-loving president

Few American presidents loved baseball more than Franklin D. Roosevelt. As a young attorney in New York City, he almost lost his job for sneaking off to Giants games. In January 1942, he wrote one of the most significant sports-related documents in US history: the so-called ‘Green Light Letter’, which insisted that, despite American commitments elsewhere, baseball should continue to be played during the Second World War. 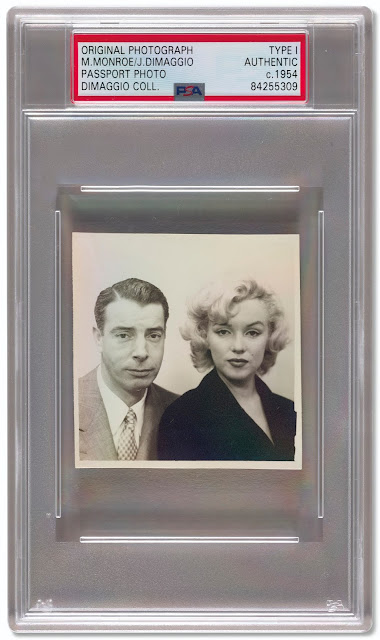 On 29 January 1954, two weeks after their wedding, Joe DiMaggio and Marilyn Monroe boarded a Pan Am flight for Tokyo. DiMaggio, 39, was newly retired from Major League Baseball; Monroe, 28, was on the brink of superstardom.

The aim of the trip was twofold: Joe would coach Japan’s major teams, while the couple enjoyed a honeymoon far from the crowds back home. In the event, the honeymoon was hijacked when Monroe accepted an invitation to entertain 10,000 US troops in South Korea — where she sang Diamonds Are a Girl’s Best Friend  in a skin-tight purple dress and mimicked swinging a baseball bat in honour of her absent husband.

The marriage was over by October. But DiMaggio remained devoted to the star, and it was he who organised her funeral in 1962. He continued to treasure his photographs from the trip, along with a poignant letter from Monroe signed ‘Your wife (for life), Mrs J.P. DiMaggio’, which is also in the sale, with an estimate of $50,000-100,000…………….