THE GETTY CENTER, LOS ANGELES. INTERPRETING THE BEASTS OF THE MIDDLE AGES

Animals were an important part of the everyday lives of ancient and medieval people, whether they were real or imagined, and their literary use in the Middle Ages formed a moral language. 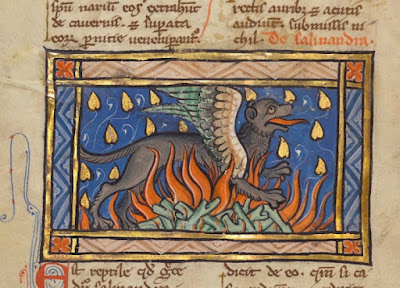 Unknown artist, A Salamander; France (formerly Flanders); (circa 1270 CE); tempera colors, gold leaf, and ink on parchment; Leaf: 7 1/2 × 5 5/8 in.; Ms. Ludwig XV 3, fol. 95v; A Franco-Flemish manuscript depicts a Salamander, which was seen as so cold an animal that it could endure fire. It could also be used to signal righteous people (image via the Getty Open Content program)

This summer visitors to the Getty Center in Los Angeles can explore Book of Beasts: The Bestiary in the Medieval World, an exhibition which looks to a genre of medieval manuscripts called bestiaries. The compendia of animals were particularly popular in Northern Europe from 1180–1300 CE. Bestiary texts point to the symbolism, attitudes, myths, and morals attached to animals during the Middle Ages, as well as the belief in a divine order within nature.

Animals were an important part of the everyday lives of ancient and medieval people, whether they were real or imagined, seen or unseen. The literary and graphic use of animals — say, a lion for courage or a serpent to represent evil — in the Middle Ages also formed a moral language unto itself.

To trace the development of this language, we must go back to the early formation of Christianity during the period of the Roman Empire. A Christian text written in Greek called the Physiologus, likely written in the second or third centuries CE, provides a predecessor to medieval bestiaries and became a popular text during the Middle Ages and was translated into multiple languages. It told 48 stories about the nature of real and mythical plants and animals, each with a religious interpretation of the figures regarded as allegories. In the late fourth century CE, Saint Augustine also began to address the role of animals in religious doctrine. The bishop and theologian published a number of volumes instructing Christians how to read Christian texts. In his second book, he notes the import of understanding animals:

Ignorance of things, too, renders figurative expressions obscure, as when we do not know the nature of the animals, or minerals, or plants, which are frequently referred to in Scripture by way of comparison. The fact so well known about the serpent, for example, that to protect its head it will present its whole body to its assailants — how much light it throws upon the meaning of our Lord’s command, that we should be wise as serpents.

Augustine’s ideas had an impact on how animals and monsters would later be understood in the Middle Ages. Asa Mittman, a professor of art history and author of Maps and Monsters in Medieval England, notes in his comments to Hyperallergic that Augustine saw fantastical beasts as signs from God that required interpretation. Each represented possible prophesies that could transcend natural law and in doing so, demonstrate divine potency:

[To Augustine], the seemingly impossible, unnatural elements of monsters — humans with dog-heads, with fish tails, lions with bird wings, immortal creatures, fire-breathing creatures, and all the rest — are possible because God established the laws of nature, and they do not apply to him. Indeed, by breaking them, Augustine believed, God showed his infinite power.

The curated manuscripts and objects in Book of Beasts are luscious reminders of the late antique and then medieval use of animal symbolism across the Mediterranean as a recognizable visual language within early Christianity. However, the understanding of animals and their use in medicine or healing is also apparent in other illuminated manuscripts from outside Western Europe within the exhibition, such as an illumination of a viper from a Persian copy of Ibn Bakhtishu’s Manafi al-Hayawan (“On the Usefulness of Animals”).

Book of Beasts is accompanied by a richly illuminated volume, Book of Beasts: The Bestiary in the Medieval World, which has 270 illustrations and scholarship from leading academics within the fields of medieval manuscripts and the interpretation of animals in the Middle Ages. The volume was edited by Elizabeth Morrison, senior curator of manuscripts at the J. Paul Getty Museum, along with Larisa Grollemond, assistant curator of manuscripts also at the Getty. I spoke with Dr. Grollemond about how the exhibition came about and why bestiaries have become a source of fascination today in everything from Tolkien to J.K. Rowling.

As Grollemond notes, this exhibition draws upon a smaller one organized by Morrison back in 2007 called Medieval Beasts. This was the year that the Northumberland Bestiary, a well illustrated, thirteenth-century English bestiary, was acquired by the Getty, making the research center a global hub for the genre. In 2017, UCLA’s Center for Medieval and Renaissance Studies and the J. Paul Getty Museum’s Manuscripts Department hosted scholars for an interdisciplinary symposium, “The Ark After Noah: Books, Beasts, and Bodies of Knowledge.” From there, Morrison and Grollemond worked to make this unique exhibition into something that underscored not only the bestiary texts themselves, but the relationship between literary animals and other medieval objects. Grollemond says:

Scholarly focus on the bestiary had largely been dedicated to tracing the development of and variations between the texts, and so Beth and I wanted to shift attention towards the visual tradition, which is why the exhibition includes not only many of the most important bestiary manuscripts created during the Middle Ages, but also objects in a variety of other media that show how the bestiary’s animals and stories became a part of the visual vocabulary of the Middle Ages, popular across Europe for many hundreds of years.

As Book of Beasts underscores throughout, manuscripts do not exist in a vacuum. Unicorns could be seen in many medieval bestiaries, but they also appear in household objects like a fifteenth-century German unicorn aquamanile (water vessel), which is brought here by loan from the Metropolitan Museum of Art.  Objects, texts, and ideas all influence each other.

While some visitors may be astonished to discover previously unknown medieval animals, they will likely also connect to the recognizable visual language communicated by these illuminated manuscripts. As Grollemond notes:

One thing that visitors to the exhibition may not know is how familiar they already are with the bestiary — common sayings including “lion, king of beasts,” “wily as a fox,” “crying crocodile tears,” and “memory like an elephant” are all based on the characterizations of animals from the medieval bestiary. So much of our received wisdom about animals and the way they supposedly behave and their personality traits are directly taken from the bestiary and have been so ingrained in western consciousness that they’re like second nature to the way people still think about the animal world.

Grollemond relates that the original illuminations are important to understand, but so is how they have been received by popular culture. Gauging the impact of the medieval bestiary relies in part on seeing how the illuminations influenced art, media, and texts today:

Animals especially associated with the Middle Ages, like unicorns, dragons, and griffins, continue to fascinate contemporary audiences, especially seen in pop culture icons like Harry Potter and Game of Thrones. The visual legacy of the bestiary itself is reflected in the last section of the exhibition, which collects together works by a number of modern and contemporary artists who either work with the combination of text and image centering on animal allegories, or are exploring the points of intersection between the human and animal worlds.

The exhibition corrects the idea that medieval bestiaries were intended as comprehensive natural history encyclopedias and instead demonstrates that they were created for different audiences and reasons. Grollemond remarks that bestiary manuscripts were originally used within monasteries for the education of monks, but also came to influence the sermons given to the lay public. The wealthy may have often commissioned them, and those at court reveled in their tales. But regular people would have also understood their aesthetics even if they could not afford to buy one for themselves.

As Augustine first said, “Ignorance of things, too, renders figurative expressions obscure” and Book of Beasts helps to disintegrate modern ignorance over the language of allegorical animals in the Middle Ages. Revising our understanding of dragons, unicorns, or a deceptively mundane salamander means that we can perhaps begin to see beyond the fantastical or monstrous elements of the medieval bestiary. As Book of Beasts demonstrates, medieval bestiaries were not simply animal encyclopedias, but instead illustrated the vast dominion of mankind and of nature by cataloguing all living things. They also spoke to humanity’s perceived virtues and vices: fears of the devil could be seen in the dragon, the ideals of purity and chastity in the unicorn, and conceptions of righteousness within the fiery salamander. Translating the meaning of these animals today means uncovering the embedded ideals, fears, and anxieties that prevailed during the Middle Ages — and asking ourselves what our own modern obsession with monsters and fantastical beasts may say about us.