The new author of the memoir Let Love Rule discusses dealing with a cheating father, maintaining optimism in a sea of despair, and why he’ll keep performing for decades 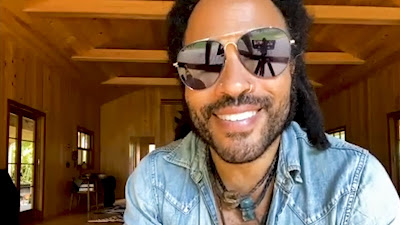 Shortly after the pandemic began spreading in early March, Lenny Kravitz left his Paris home and decamped to his island retreat in Eleuthera, a small island in the Bahamas. Rather than touring the world and promoting his new memoir Let Love Rule in person, Kravitz has been living the simple life, growing his own food, and using trees as makeshift bench presses.

“When we’re not in this situation and I’m down here creating, I realize I’ve been quarantining my whole life,” Kravitz tells Rolling Stone in the latest episode of the Rolling Stone Interview: Special Edition video series. “This is kinda how I live the whole time.”

Kravitz has been in a reflective mood of late discussing his book — the first of two — which covers his life up until the release of his 1989 debut album, Let Love Rule. With little rock star hedonism and (stereo)typical tales of excess to speak of — that’ll come in the next book — you’re allowed to be skeptical. But the memoir is a fascinating look at Kravitz’s duality — a biracial kid shuttling between Manhattan and Brooklyn townhouses before moving to Los Angeles where he feels equally at home in a Beverly Hills mansion or the goth, New Wave and stoner/skater subcultures in which he immersed himself.

One major part of the book details when Kravitz caught his father cheating, which led to his mother throwing Kravitz’s dad out of the house. Kravitz’s dad coldly told him, “You’ll do it, too,” before walking out the door; a moment that left an indelible mark on the 56-year-old singer for years.

“It was quite a deep statement at a time where my mother wanted him to say something that would’ve benefited me. ‘Listen, son, this was wrong. I want you to understand. I’m sorry.’ And he just went there,” he says. “As hardcore a statement as that was in the moment, I didn’t realize how deeply it had penetrated my being … But when I look back at it, I can understand with new eyes and without judgment that he was just thinking what he thought was his truth … What was beautiful to me was instead of looking at my father as my father and what he’d done to me, I saw him as a character. I got to see him as a man who was trying to find his way.”

On March 13th, as the pandemic was beginning to rage in America, Kravitz posted a video on social media saying: “We’re all one; We’re one human race.” Even when writing deeply personal songs about injustice, racial unrest, and systemic racism, he’s always maintained an overarching sense of utopianism. Has that been harder to maintain this year?

“It’s getting more intense and challenging but I do know that we have the ability to come together. We’re just stuck in our horrible ways,” he says. “I’ve had days where it gets to me and I have to fight the depression and it’s just so sad to me how we treat ourselves and our planet and to see how backwards things are going. If my grandfather was alive now to see what’s going on [with racial injustice], he wouldn’t be able to handle it. I still believe that we have the ability, but we have a deep hole to dig ourselves out of right now. The system needs to be completely torn apart and rebuilt.”

In this career-spanning interview, Kravitz also discusses his favorite (and least favorite) of his albums, explains how he was almost the original singer for Rockwell’s “Somebody’s Watching Me,” and sings the very first song he ever wrote (“I Love You, Baby,” at age 6).

“From Duke Ellington to B.B. King to Mick Jagger now … he can still rock a stadium better than most 20-year-olds,” Kravitz says, when asked whether he foresees doing this for decades more. “I’m in the middle now. I’m still young. Twenty-some-odd years from now when I get to where Mick is, I’ll still be doing it, God willing, if we have a world where we can do that.”