Wonder Woman’s use of her ancestor’s objects as they were intended offers a vision of why museums should exist and continue to keep all these things. 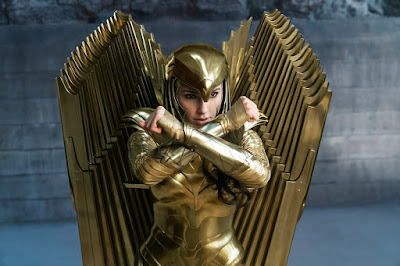 When we last saw Diana Prince, aka Wonder Woman, in 2017, she offered a glamorous vision of a museum job: surrounded by ancient weapons in her Louvre office, dressed in luxe cashmere and killer boots, stunningly beautiful. Unreal as this was, as a museum worker, I recognized a bit of my own experience on screen: the office with no natural light, the desk with its microscope and selection of tools and brushes, the computer screen’s blinking digital database. Wonder Woman seemed, briefly, luminously, like real museum staff, one of us.

In the recent release WW84, it’s the year 1984. Diana works at the Smithsonian in Washington DC as a curator of “cultural anthropology and archaeology,” a vague title that offers the first hint that she’s not legit. Her credentials fall away when, upon breaking and entering into her nemesis’ lair during her work hours, she pats her palms together and utters, “It’s so dusty in here” (said no archaeologist, ever). But it’s her blatant disregard for the most basic of museum procedures — abusing her security clearance (aircraft do not come under her purview); not filing paperwork for the movement of museum items (and flying one to Cairo no less); and wantonly damaging works of art (two paintings, one ceramic vessel, a marble table and one column) — that makes clear that Wonder Woman is not museum staff.

2020 was the year museums needed a champion. The pandemic shuttered most institutions, triggering layoffs of both front-line and behind-the-scenes museum workers in a field that is already financially precarious. Those of us still employed find ourselves reckoning with what museum workers do if we can’t be around art or historic objects. And then there’s the sadness of missing the simple pleasure of visiting museums. So, when WW84 ruined Christmas by using the museum merely as a backdrop, making it a Pier 1 Imports version of a wunderkammer, I felt personally affronted. And when just days into 2021, historic objects and art in the Capitol became casualties of a violent insurrection, the idea of Wonder Woman saving both cultural heritage and our democracy felt even more farcical. But in the days since, I’ve been wondering: is it such a bad thing that Wonder Woman is not museum staff?

At the core of the film’s conflict is the greed of literal oil salesman Maxwell Lord, ever clad in a boxy pinstripe suit. He wants a powerful stolen artifact that the FBI has conveniently left in Diana’s museum with her colleague Barbara Minerva (“geology, gemology, lithology, and cryptozoology”). Lord gains access to this object, the Dreamstone, by promising a hefty donation to the Smithsonian, something that entitles him to a private tour of the place. I felt an uncomfortable familiarity in seeing how Barbara keeps up an indulgent, giggly patter with Lord even as he tosses museum objects (“Oh no, be careful with that!”) and plays patron peekaboo as he tries on an ancient mask (“Did you see my friend, where’d he go?”). All sans gloves, of course.

There’s a lot about the way donor, er, relations, are cultivated in this film that exposes a major crisis in the museum world. Though the pandemic unmasked the financial precarity of museums, our institutions are forever bracing for the slashing of federal funds by a government, and perhaps a larger society, that does not see our work as valuable, let alone essential. This makes private and corporate donors crucial to cultivate, be it through exclusive peeks at all the cool stuff we’ve got strewn (cushioned in archival storage containers) on our desks, or offering the caché of attending a glitzy museum gala (which most museum staff are not invited to attend).

Many museum donors would find Max Lord’s behavior reprehensible, but there have been a number of recent real-life villains for WW84’s filmmakers to draw upon. From encouraging the illicit antiquities trade, to funneling donors’ ill gotten gains, to accepting sponsorship money from big oil companies, people in positions of museum leadership have had a lot to answer for. Diana, however, has the kind of moral rectitude most museum workers quietly evince and wish we could express more directly. I cheered as she says sanctimoniously to Lord, “I find that our benefactors with a true eye toward philanthropy prefer to stay out of the spotlight and let the museum’s work garner the attention.”

Perhaps most startling about WW84 is what it gets right about why museums should exist. Beyond the lazy museum décor with its “spooky” masks, taxidermied animals, and dubious ancient inscriptions, or the stereotypical nerdy curators spouting nonsense like “scientists don’t wear heels,” the film reminds us why we love old things. But that recognition doesn’t happen in the museum. It happens in Diana’s elegant (out of a typical curator’s price range) apartment. In her walk-in surveillance closet.

Diana may not really be museum staff, but she is an indigenous Themysciran. Since immigrating to the United States (Statue of Liberty selfie: check!), she has kept both her foreign accent and her cultural identity intact. And somehow, contravening both legal and ethical standards, Diana has acquired a suit of armor worn by her famed Amazon forebear Asteria. This she keeps wrapped in brown burlap cinched with rope, not in her museum, but within arm’s reach in her closet. The armor clinks when touched, and inexplicably, still gleams. (Trust me, archaeological metal does not do that, except maybe gold. Wait, is it gold? But that would be too heavy to wear and too soft to deflect blows. Never mind.) Because what worked for her ancestor will work for Wonder Woman.

Wonder Woman knows about the power of actually using objects “from my culture,” as she says. Clad in Asteria’s armor, she regains her sense of self, her lineage, and her purpose: to confront and reverse the great evils that humankind unleashes on itself. This ancient relic allows her to both soar through the air and repulse the most vicious assaults, the metal bending and deflecting with unfathomable ductility and strength. Seriously, what kind of metal is this? A Vibranium-gold alloy?

But what Wonder Woman, the immigrant superheroine, has the privilege to do is something denied to many Indigenous and originating communities whose cultural items are held “in public trust” in museums. Citing concerns about preservation, museums have historically refused access to, let alone use of artifacts, a reminder of the colonial and white supremacist legacy of our institutions. Wonder Woman’s use of her ancestor’s objects as they were intended (despite bits of metal feathers breaking off, alert the museum’s conservators!) offers a vision of why museums should exist and continue to keep all these things. Museums are meant to serve as places where we connect people with their heritages and their full identities as people with valuable pasts, presents, and most importantly, futures.

But what does Diana actually do at work, besides passive-aggressively fact checking Barbara’s research? The most realistic representation of what museum staffing looks like is the epic brawl between Wonder Woman and Barbara-soon-to-be-Cheetah in an art-filled White House. There’s a raw exchange between the two mid-fisticuffs and body slams where Wonder Woman chides Barbara with the kind of criticism most women who dare to pursue leadership positions have heard, “Where’s your warmth, your joy, your humanity?” Barbara spits back, “You’ve always had everything while people like me have had nothing. Well, now it’s my turn. And you’re not taking it from me. Ever.” Now there’s a kind of curatorial Karening that feels of our time.

But clearly, the screen writers had done no research on current museum demographics because they created an other-worldly “Earth Sciences” department that cosplays a 1980s Benneton advertisement. I know it’s just a movie, but I found myself greedily drinking in these scenes for their utter alienness given that in 2018, a survey assessed that women made up 61% of museum employees and that museum “intellectual leadership” is 80% white. So, it’s not just Diana who isn’t museum staff. The entire museum staff in WW84 isn’t museum staff. And that’s an extraordinary vision of who we could be in the future.

In one shot, Barbara, (that’s Dr. Minerva), perched on a work surface with fume extractors in the background, holds court in the laboratory. The camera pans to five people of color among these co-workers, grinning and sipping the ubiquitous coffee. (Filmmakers, stop it with the drinks in museum spaces. I’m still mad at Ryan Coogler for making Black Panther’s otherwise perfect museum scene hinge on curatorial coffee consumption.) WW84’s version of museum staff includes an Asian American “Miami Vice” extra, a South Asian man with a British — not faux Indian — accent, and not one but three African American staffers. One of them, Carol, is a boss supervisor who hires so many underling white women that she can’t even recall interviewing Barbara for her job. Twice.

Despite WW84 being a mess because of “so, so many things” as Diana says, it’s 2020’s most streamed release. Wonder Woman 3, set in the contemporary world, is already fast tracked for production. Where will Diana Prince work next? And will the filmmakers actually collaborate with museum workers for this next outing? Because we have a lot to learn from each other — both how to make the museum world look more like it actually does, and also how to make the museum look like it doesn’t, but might. Rather than functioning as an exotic backdrop, could the next iteration make the museum the place of story-telling, connection, and quiet heroism in ways that many of us museum workers wish it would be? Patty Jenkins, DM me. As you know, I work for donations.