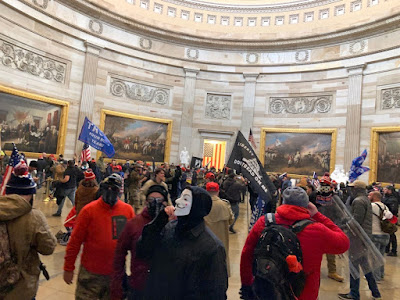 The National Civil Rights Museum in Memphis, the Museum of Jewish Heritage in New York, the Smithsonian, and Ford Foundation President Darren Walker have joined the widespread condemnations of the Pro-Trump mob attack on the United States Capitol this week.

“The siege on Capitol Hill yesterday during the joint Congress’ ratification of the presidential election should be condemned, not coddled,” said a statement by the National Civil Rights Museum published on January 7. “What the world witnessed yesterday was not a protest, but a riotous mob and an insurrection. We need to call it what it is.”

The museum’s statement goes on to question and criticize the unpreparedness of law enforcement for the riots, calling it “curious at best.”

“We cannot deny the difference in the handling of those groups that were predominantly Black and marching to protect the lives of Black people, to the treatment yesterday’s rioters received,” the Memphis museum said. “The response yesterday poured salt on the gaping wounds of racism that persist in this country,” it continued. “We must not perpetuate this behavior and make excuses for it. Enough is enough! This needs to end!”

The Museum of Jewish Heritage noted in a statement yesterday that some Trump loyalists brandished anti-semitic and racist symbols on Wednesday, including Confederate flags, nooses, and attire promoting the Auschwitz death camp, which is the subject of the museum’s current exhibition, Auschwitz. Not long ago. Not far away.

“We have a responsibility to stand up and condemn the blatant bigotry displayed at the Capitol on Wednesday,” said Jack Kliger, the museum’s president and CEO. “We cannot be silent bystanders. We must speak up and take action wherever and whenever we witness hatred and threats of violence.”

“Our Museum draws on lessons from the Holocaust to educate about hate and injustice in our current times,” Kliger continued. “We remain committed to educating our visitors, whether in-person or online, on the reality and dangers of extremism.”

The museum followed with another statement, reporting that a Confederate flag was tied to its front door this morning, January 8. “This is an atrocious attack on our community and on our institution and must be met with the swift and forceful response by law enforcement,” Kliger said, adding that the museum is working with authorities to identify suspects.

In a personal blog post yesterday, Darren Walker of the Ford Foundation argued that “Democracy is the greatest threat to white supremacy.”

“Like so many others, I watched, aghast, as a mob stormed our revered temple of representative democracy — and on a day when another 3,865 Americans fell victim to the raging coronavirus pandemic,” Walker wrote.

Describing the harrowing sights of Wednesday, he continued:

The world was shaken by a shocking, odious sight: Confederate battle flags inside the National Statuary Hall; gallows with nooses on the National Mall outside. With glee, two rioters reenacted the murder of George Floyd on the steps of the National City Christian Church—one kneeling on the neck of the other, fully aware of the cameras capturing their laughter. Four people lost their lives.

Walker echoed the thoughts of the National Civil Rights Museum and many others who believe that a Black Lives Matter rally would have been met with a larger, more proactive police force.

“Make no mistake: If these had been peaceful protestors for racial justice rather than violent combatants for white pride and grievance, law enforcement would have used extreme force, if not live bullets, to keep the building secure.”

Although he sees the mob attack on the Capitol as “the latest chapter in a long, dispiriting, exhausting history,” Walker chose to end on a hopeful note.

“I’m hopeful because, from our founding contradiction, we have emerged a freer, fairer nation,” he wrote. “All too slowly, all too unevenly, all too imperfectly — and at far too high a cost — we, the people, have struggled to root out the strand of white supremacy in our country’s DNA.”

Anthea Hartig, director of the Smithsonian’s National Museum of American History, released a statement today comparing the events of January 6 to the election of 1876, which violently and unconstitutionally ended Reconstruction.

“This week reminds us of the long and deep history of white supremacy and the hatred and privilege it affords,” Hartig wrote.

Her statement quoted Smithsonian Secretary Lonnie G. Bunch saying: “As a historian, I have always believed in the power of peaceful protest. [The day’s] demonstrations give us a glimpse of the fragility of our democracy and why the work we do and the stories we tell are so important.”

On Instagram, the Brooklyn Museum posted an image of Ed Ruscha’s painting “OUR FLAG” (2017), featuring a torn American flag, with a caption that partially reads: “The feelings of fragility and uncertainty evoked in Ruscha’s work were sadly reinforced by yesterday’s efforts to overthrow and undermine the basic principles of our democracy—a peaceful transfer of power.”