IN SPANISH TRANSLATION FROM JANUARY THE 28TH. THE NIGHT OF SHOOTING STARS 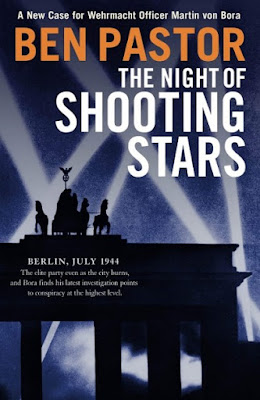 July 1944. A state funeral in bombed-out Berlin. Why has an elderly physician, for years an ardent critic of regime-sponsored medical experiments, received such an honor? And why was his nephew, Colonel Martin Bora, called back from the difficult Italian front to attend?

It is just the beginning of a convulsed week, where a dangerous game is played between headquarters, down sordid streets, and in the frightening Presidium of the Criminal Police. Bora is in fact unexpectedly ordered by SS General Arthur Nebe to investigate the murder of a dazzling showman and clairvoyant, a major star since the days of the Weimar Republic. For years Walter Niemeyer has mystified Germany with his astounding prophecies. Yet he was unable to anticipate the moves of his assassin. Or was he?

Soon enough the perceptive Bora realizes to his dismay that there is much more at stake than murder in a paranoid city where everyone suspects everyone, and where insistent rumors whisper about a conspiracy aimed at the very heart of the Nazi hierarchy. Danger lurks behind every street corner. Nerves are precariously tense among army officers, secret meetings multiply, suspicious deaths follow one another…