At least four people are dead after supporters of President Trump stormed the U.S. Capitol in Washington, D.C., on Wednesday, forcing Congress to evacuate as lawmakers counted electoral votes to certify President-elect Joe Biden's victory in the November election. The chaos erupted shortly after Mr. Trump gave a speech once again falsely claiming to have won a second term and vowing "we will never concede."

One woman was shot and killed by police after breaching the Capitol and attempting to enter the House chamber. Three others died as a result of "medical emergencies," according to the Metropolitan Police Department. 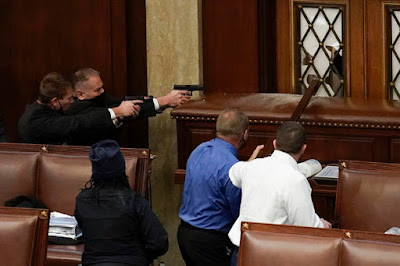 U.S. Capitol Police with guns drawn watch as protesters try to break into the House Chamber on January 6, 2021, in Washington.

Troops from Virginia, Maryland and the D.C. National Guard were deployed to help quell the violence. Several hours after the initial breach, law enforcement announced the Capitol had been secured.

As the chaos ensued, Mr. Trump told his supporters to go home but repeated the false, inflammatory claim that the election had been stolen. "We have to have peace, we have to have law and order," the president said.

The Senate and House both reconvened late Wednesday to resume counting the Electoral College votes. "The United States and the United States Congress have faced down much greater threats than the unhinged crowd we saw today," said Senate Majority Leader Mitch McConnell. "We've never been deterred before and we'll not be deterred today."