WHY LOVE HURTS: A SOCIOLOGICAL EXPLANATION WITH EVA ILLOUZ 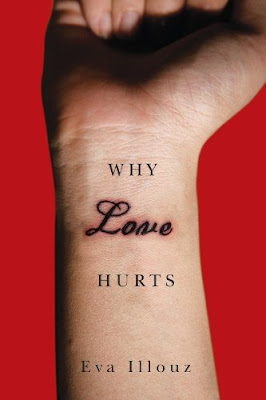 When love is unrequited, lost or betrayed, it hurts, and this pain can strike anyone at any time. Yet, granted that the misery of love is as old as love itself, has the suffering always been experienced in the same way? Does it affect women and men equally? And are the coping strategies used today the same as those used in the past? This book aims to provide answers to these and other questions about the misery of love in late modernity. As the title indicates, the answers are sociological in form and opposed to rival explanations coming from the ‘psy’ sciences, which, the author suggests, are symptoms of the contemporary malaise, particularly as propounded by the pop psychology industry.

The central argument of the study is that the social organisation of romantic love has been greatly transformed over the last century, and that the way we experience its misery today is quite distinctive. Thus, the opening chapter of the book provides an engaging analysis of nineteenth-century romantic practices and feelings as portrayed in classics such as Emma, Madame Bovary, Pride and Prejudice, Persuasion and Wuthering Heights. These are compared to contemporary representations found in television series such as Sex and the City, the Bridget Jones franchise and newspaper columns like that of Catherine Townsend. Illouz argues that these show the declining power of socioeconomic status, religion and race as regulators of what is deemed a socially appropriate ‘match’ between men and women. Instead, she argues, the social expectation today is that our pairing choices will be made strictly according to the dictates of our heart, free from any external constraints. Yet with the heart thus liberated, where is our misery coming from? What are its institutional origins and why do women seem to be more vulnerable to it than men?

In examining the transformation of romantic love posited by the study, Illouz identifies two sites of change—the ‘ecology’ and the ‘architecture’ of choice—and focuses on the processes leading to change in each of them. These include the emergence of self-regulated markets of encounters (sexual fields) where pairing increasingly takes place. Instead of the old norms of propriety that regulated pairing in the Victorian era, sexual fields today are regulated simply by laws of supply and demand, scarcity and oversupply, with sexual attractiveness (sexiness) as the currency of exchange. Thus, the extension of the logic of capitalism into the private realm of the emotions (a topic investigated in some of Illouz’s previous booksFootnote1) is presented as a major feature of the contemporary condition. Players in sexual fields (particularly men) behave like capitalists, accumulating sexual capital as a means to social status, and generate a new kind of stratification by gender. As men can afford to be ‘active players’ longer than women, and as the accumulation of sexual capital constitutes an important source of social status for men, the rewards and incentives offered by these sexual fields are stacked in their favour. This results in an increased ‘commitment phobia’ on the part of men, which alongside the emergence of new forms of masculinity, lies at the root of the misery experienced by many women looking for a long-term relationship, Illouz argues.

In examining how romantic love has been transformed, this book thus claims to unearth a new form of women’s subordination that some readers may find disturbing. Others may wonder about the putative significance of the cultural changes it describes. Thus, how important are these new sexual fields as sites where love is found? Might they not be ephemeral subcultures soon to be replaced by something else? While the author is aware of the limitations of the study with regard to its scope—she warns that the book is mainly about middle-class heterosexual women in modern societies looking for marriage and children—its real scope is narrower than that, and this may lead to genuine scepticism regarding its more sweeping claims.

Nonetheless, this is a highly engaging and thought-provoking book. Perhaps one of its most interesting aspects is its discussion of the concept of male power. According to Illouz, this concept is not very illuminating for explaining why women are being dominated by men in new and unprecedented ways and why these novel forms of gender stratification are mainly found in sexual fields. If women are subordinated in new ways, this means that advancements in women’s liberation following the second wave of feminist movement and the sexual revolution have failed to prevent the current situation. How can the concept of ‘male power’ help to make sense of this phenomenon? In this regard, her account of the great transformation of love can be read as an attempt to fill in the gaps regarding the gendered dimensions of romantic suffering left untouched by classical feminist theory. Of particular importance in Illouz’s analysis is the use made of the concept of social status, in lieu of that of male power, for making sense of the gender stratification of sexual fields. Thus, in her view, the magnification of serial sexuality as a source of social status for men is tied to the erosion of traditional sources of status such as the family or work. As a result, old gender inequalities are re-enacted in these new spaces.

This is an ambitious book, almost encyclopaedic in its aims. It contains a multitude of citations, quotations and allusions to a sprawling and heterogeneous literature that unfortunately often clutters the text and impairs the prose, notably the last two chapters, which read like works in progress. However, alongside its theoretical ambitions, the book also has a clear political purpose, something that becomes evident in the epilogue. The author strongly urges feminism to deal with the new forms of women’s oppression through a refreshed analysis and to devise new strategies ‘to cope with emotional inequalities and meet women’s larger social and ethical goals’ (p. 246). It is for these and many other reasons that the book is well worth a read.