THE ACTRESS KRISTEN STEWART WAS THE ONLY GUEST IN ATTENDANCE 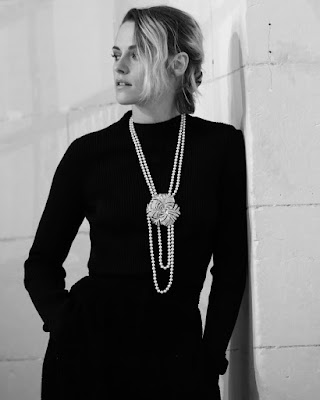 Kristen Stewart is taking the meaning of VIP status to a whole new level.

On Tuesday, the actress was the sole guest at Chanel's elaborate Métiers d’Art fashion show which took place at Château de Chenonceau in France's Loire Valley.

In footage from the show, Stewart, 30, is seen posing against a wall before the models enter the room and she begins to watch the private show.

The Happiest Season star dressed chic for the occasion wearing an all-black, head-to-toe Chanel ensemble including

But the pièce de résistance of the look was the Chanel High Jewelry necklace set with 1 round cut 2-carat diamond, 980 brilliant-cut diamonds weighing in at 24 carats and 268 Akoya pearls all set in 18k white gold.

Guests for the fashion show had to be cut back due to the coronavirus pandemic, according to Nylon.

RELATED: Kristen Stewart Talks Playing Princess Diana in New Film: 'It's Hard Not to Feel Protective of Her'

The show totaled 301 people, 300 of whom were cast and crew members, and Stewart as the one private viewer.

Stewart will be featured in ads for the upcoming collection photographed by Juergen Teller.

The actress had a front-row seat to watch as the models showed off the mostly black-and-white collection from creative director Virginie Viard.

"Showing at the Château de Chenonceau was an obvious choice," Viard said in a statement, as both Diane de Poitiers and Catherine de’ Medici — who inspired Coco Chanel — designed and lived in the castle, according to The Cut.

Stewart told WWD that she prepared for the private show by binge-watching episodes of the CW series Reign, which was about the life of Mary, Queen of Scots.

"I was learning about who’s lived here and who’s loved this place, and it’s shifted hands primarily between women. And I was just telling Virginie, it felt like the story was folding in on itself," she explained. "The women who lived here before were really into art, and promoted a lot of creativity, and loved to be inspired and inspire other people to come create, and I was imagining who our characters were while watching the show."

"I’m always proud of her, but it felt very personal this time," she said of Viard's work.

Never miss a story — sign up for PEOPLE's free daily newsletter to stay up-to-date on the best of what PEOPLE has to offer, from juicy celebrity news to compelling human interest stories.

At the end of the show, Stewart can be seen standing up and giving Viard a round of applause as she enters the room after the final walk-around.