ANOTHER WORLD-FAMOUS ANCIENT COLLECTION, ON DISPLAY FOR THE FIRST TIME, AWAITS VISITORS IN ROME

The impressive exhibition undertaken by the Capitoline Museums and the Torlonia Foundation was 40 years in the making, and placed close to 100 marble sculptures from the storied Torlonia collection on view. 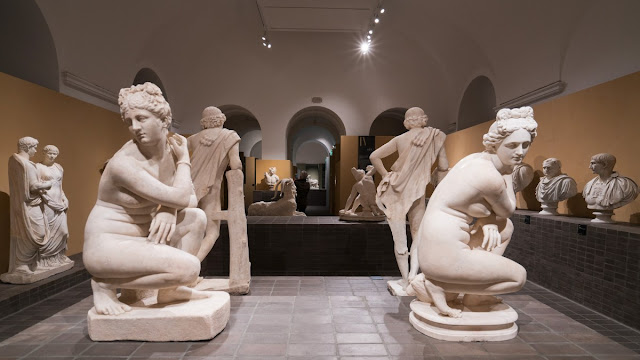 On November 6, 2020, all major museums and archaeological sites in Rome were required to close due to measures meant to stifle the resurgence of COVID-19 in Italy. These closures included the long awaited (and only briefly open) I marmi Torlonia: Collezionare capolavori  (The Torlonia Marbles: Collecting Masterpieces). Curated by Salvatore Settis and Carlo Gasparri and set within the in the new exhibition space of Villa Caffarelli, I marmi Torlonia had only been open since October 14 last year and was slated to go until June 29, 2021. Close to 100 marble sculptures from the storied Torlonia collection were placed on public display for the first time, due to an agreement between the Italian Ministry of Cultural Heritage and Activities and Tourism and the private Fondazione Torlonia (Torlonia Foundation).

The impressive exhibition undertaken by the Capitoline Museums and the Torlonia Foundation was 40 years in the making. An agreement for the display of 96 of the 620 Greek and Roman sculptural pieces from the fifth century BCE to the fourth century CE held in the Torlonia collection was inked in 2016. It was meant to solidify a pact to display works collected from the 15th to the 19th century and acquired by the Torlonia family; works of art which had languished out of view from the public due to years of disagreement about how to exhibit the marbles and whether pieces should be put up for sale to other museums. A lawsuit brought against the Getty Museum in 2017 by Swiss art dealer Phoenix Art alleged that in 2014, the Getty Museum had identified a number of pieces from the collection it had wished to purchase, but ultimately abandoned the plan. (The suit was subsequently voluntarily dismissed by the plaintiffs.) Salvatore Settis, one of the curators of the current Torlonia exhibition is notably the former director of the Getty Research Institute.

It is not just the collection that has a rather tumultuous history. The Franco-Italian Torlonia family is a storied one, with a history filled with fighting, intrigue, and art stretching back to the 18th century when the family began to handle banking and finances for the Vatican. The Torlonias acquired a substantial portion of their collection from another noble collection, that of the Marquis Vincenzo Giustiniani, patron of Caravaggio.  In her book, Alessandro Torlonia: the Pope’s banker, economic historian and professor Daniela Felisini addresses how the papal banker used art to achieve prestige and status — while also inspiring other businessmen at the time to engage in the collecting of ancient art.

As Agnes Crawford, a leading guide and writer living in Rome, remarked to Hyperallergic, the Torlonia exhibition, which she saw on November 3rd, just a few days before the new lockdown began, is as much about the history of private collections held by Italian families as it is about what is in the collection itself. In a guest post on the esteemed Art and IP Law Blog, the art historians from the Milestone Rome blog noted the history of the collection:

Around 1875, the Prince Alessandro promoted a project to establish a Museum of Ancient Sculpture in an old grain warehouse along Via della Lungara near Palazzo Corsini. Dubbed “Torlonia Museum” it was open to small groups of visitors. But the project didn’t last, since in 1976 the building was converted into housing units and the collection locked up.

The Greek and Roman pieces of sculpture and relief on display­­ — made of white marble, colored marble, and bronze — are stunning in terms of craftsmanship and content. The famed veristic bust dubbed the Vecchio da Otricoli can be glimpsed along with a statue of Odysseus under a ram as he sneaks out of the cave of the Cyclops. However, it is worth keeping in mind that many of these pieces have also undergone heavy reconstruction and conservation since antiquity, and with much of their surfaces scrubbed clean of any remaining dirt or remaining paint. One of the few pieces with paint remaining is the relief of the Portus Augusti, where you can see a red flame still burning from a lighthouse that led ships into Rome’s port in the early imperial period.

In comments to Hyperallergic, Roman archaeologist Daniel P. Diffendale, currently sheltering in place within Rome, noted that the exhibition (which he saw at its opening) was impressive yet a bit overwhelming in terms of the sheer number of works crowded into the villa turned museum space. He was also struck by the intense amounts of reconstruction done on the pieces, but lauded the exhibition’s openness towards photography and digital content. To illustrate the heavy amount of reconstruction many pieces underwent in the Enlightenment era (a period often obsessed with completeness and perfection) the exhibition underscores a Hercules figure often nicknamed “Frankenstein.” It is reconstructed from 112 fragments from numerous different eras and works and illustrates the heavy reconstruction fads in early modern collections. Notably, the display of the Frankenstein Hercules does not come until the epilogue of the exhibition. Diffendale noted that perhaps bringing the piece to the beginning of the exhibition might have provided a bit more context and an early modern lens through which to view many of these alluring yet pastiched ancient pieces. 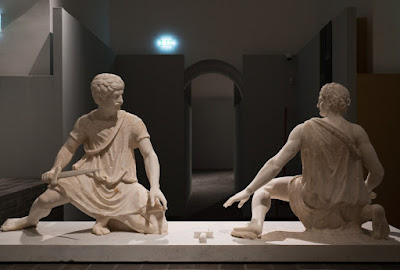 Gallery 14 (Epilogue) Hercules constructed from 112 ancient and modern fragments (no. 91) (no date) (image and caption by Daniel P. Diffendale for Hyperallergic)

Although most Roman cultural institutions are not currently open to the public, the Torlonia Foundation has made an extensive website for the collection which can be searched by material, subject, category, origin, and inventory number. Not all pieces previously on exhibit appear to be within the database, but most can be found along with their inventory numbers and provenance. The catalogue, The Torlonia marbles: Collecting Masterpieces, is available in both English and Italian 135 years after the last catalogue of the collection was published. The current catalogues contain records and photographs of all 620 pieces within the total collection.

The Torlonia Foundation notes that after June, the current exhibition will begin to travel, although it is unclear to which museums: “agreements are in progress with major international museums and will conclude with the identification of permanent exhibition spaces for the opening of a new Torlonia Museum [in Rome].” For now, we can take in some of this stunning Greco-Roman sculpture online and hope that the exhibition will inspire other wealthy families with large, hidden art collections to open their doors to the public. Ars Longa Vita Brevis (“Art is long, life is short”), and the Torlonia marbles demonstrate that private collectors can and should champion public access to art over winning private squabbles.

I marmi Torlonia: Collezionare capolavori was supposed to run until June 29, 2021 at the Musei Capitolini’s new venue within the Palazzo Caffarelli (00186 Roma RM, Italy), but is not currently on view. Officials within Rome are likely to address the reopening of museums and archaeological sites to the public by mid-to-late January 2021.