‘THE LANCET’ CRITICIZES SPAIN’S MANAGEMENT OF THE CORONAVIRUS CRISIS 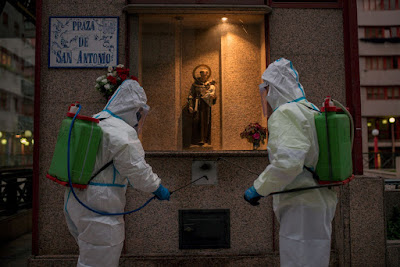 Municipal workers disinfecting a square in the Galician city of Ourense.BRAIS LORENZO / EFE

The impact of the Covid-19 health crisis in Spain, and the difference with other countries – the second wave has hit earlier and much harder – continues to draw the attention of the prestigious scientific publication The Lancet Public Health.

After publishing two open letters written by Spanish researchers asking for an independent assessment of the coronavirus response (in August) and for more rigorous and comprehensive data to understand the dynamics of the epidemic (last week), The Lancet Public Health on Saturday published an editorial titled “COVID-19 in Spain: a predictable storm?” that wondered if the current situation in the country could have been avoided.

Although the article admits that “the reasons behind this poor outcome are still to be fully understood,” it also posits that “when the national lockdown was lifted in June, some regional authorities were probably too fast at reopening and too slow at implementing an efficient track and trace system.”

The editorial also notes that despite the fact that Spain created a Center for Coordination of Health Alerts and Emergencies in 2004, the pandemic laid bare the country’s “weak surveillance systems, low capacity for PCR tests, and scarcity of personal protective equipment and critical care equipment, a delayed reaction by central and regional authorities, slow decision-making processes, high levels of population mobility and migration, poor coordination among central and regional authorities, low reliance on scientific advice, an ageing population, vulnerable groups experiencing health and social inequalities, and a lack of preparedness in nursing homes”, citing 20 Spanish public health leaders who wrote an open letter in August in The Lancet.

The editorial also notes that the Spanish health system’s four pillars – governance, financing, delivery, and workforce – “were already fragile when they were overwhelmed by Covid-19 in March,” and that the 2008 crisis reduced the health workforce and public health and health system capacities.

“Health services are understaffed, under-resourced, and under strain. With 5.9 nurses per 1,000 inhabitants, Spain has one of the lowest ratios in the EU (where the average is 9.3 per 1,000), and too often relies on temporary contracts that can run for just a few days or weeks,” notes the article.

It also underscores that “Spain’s political polarisation and decentralized governance might also have hampered the rapidity and efficiency of the public health response.”

The piece ends on a positive note, citing the latest Global Burden of Disease analysis (done in 2019, before the pandemic), which shows that Spain overperforms in life expectancy and healthy life expectancy.

“If Spain’s political leaders can draw the lessons from their sub-optimal response to Covid-19, the country is very well placed to give its population a bright and healthy future.”